Light A Penny Candle review: Binchy deserves better, but it will be a success

Why out of all the Binchy books did Breda Cash Productions walk into this one? 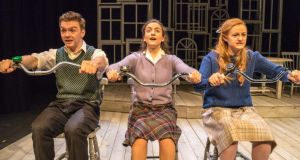 A play so dependent on dramatic cliche will be a great success. Photograph: Caleb Purcell

Everyman Theatre, Co Cork
★★☆☆☆
From this adaptation of Maeve Binchy’s novel, it is unfair that the most honest of writers will fight an irresistible urge to paraphrase Rick’s famous line from Casablanca: why out of all the books in all the Binchy titles did Breda Cash Productions walk into this one? There are 18 novels; this was the first, published in 1982, and although Binchy’s writing is endearing and funny in a happy forecast that the best was yet to come, Shay Linehan’s script doesn’t hide the over-eager plotting and the contradictions of character and likelihood. It is also significantly uneven, with the story of a life-long friendship between two young girls allowing the predominance of one character (Aisling, played with excellent timing by Kate Gilmore) over the other (Elizabeth, played as well as possible by India Mullen).

Such early inherent weaknesses, aggravated by sketchy male roles, blunt the importance of Binchy’s worldly asperity and her sharply pointed wisdom. The story almost bridges the gap from her own times to ours, catching both the differences and the not so different: religious snobbery, domestic violence, the demon drink at its most demonic. The laughter depends on a perception of early innocence; Binchy’s skill is to spice that with the tonic of truth. The bridge of experience heightens a change which tinges the many jokes (almost all given to Aisling) with communal relief..

Imprecise costuming adds to a surprising sloth in director Peter Sheridan’s approach, beginning with those infallible indicators, the ill-fitting wig and the weightless suitcase. The comings and goings demand suitcases but surely none so buoyant as these? A soldier dies a death as prolonged as an opera, a set of piled-high windows by Maree Kearns blushes scarlet to herald doom and then flares with many candles to signal rescue. Although Binchy deserves better a play so dependent on dramatic cliche will be a great success.

Continues at the Gaiety Theatre, Dublin from April 24th until May 4th