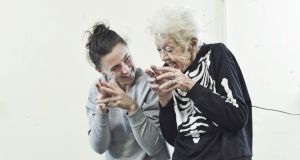 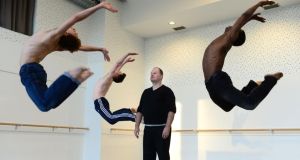 Inventions, a new Bach-inspired dance by John Scott’s Irish Modern Dance Theatre, will premiere in the midst of Kilkenny Arts Festival’s classical-music programme. The composer’s two-part Inventions might be a perfect fit for the festival’s programme, but it represents an unusual springboard for Scott. Music for his dances normally involves brush strokes of sonic textures that compete with other elements on stage to produce the slightly wild experience. In contrast, Bach’s 15 keyboard miniatures are contained, almost-perfectly-formed examples of late-Baroque counterpoint, some not even a minute long.

Scott is also an operatic tenor and has sung solo and in choirs. But even this doesn’t suggest the choice of Bach. “As a singer I’m seduced by Beethoven or Wagner, ” he says. “I’ve admired Bach, but never connected to him emotionally.”

Maybe a clue lies in Scott’s form of choice over many years: the duet. These constantly appear in his back catalogue, and even his solo Bowing Dance is, in reality, a duet performed by one person.

“I’ve always been interested in duality,” he says. “It always seems that one person’s movement is always justified because of the presence of the other person. I find making duets very logical, instinctive and interesting. When you see two people together you automatically create a narrative.”

Bach’s score is similarly spare, just two lines of melody interacting in various ways: canon, double counterpoint or binary forms. The composer Tom Lane has expanded this frugal music and changed its sound world. “The originals are almost like studies,” Lane says. “Unlike Bach’s fugues, they are quite uniform. And because they are written in different keys, each has its own character.”

Bach sometimes restated small motifs, augmenting and slowing them to half-speed. Lane has gone even further. Whole pieces are slowed down to the point that the originals are barely recognisable. Furthermore, the keyboard sonority of the originals has been replaced by a retro-electronic sound.

Using pre-existing material has demanded a different process and discipline from Lane, who is used to writing his own theatre and dance music from scratch. “It has certainly changed what I’ve composed. John and I worked together on Lear and Precious Metal, and those scores were based more on sounds and texture. This score is more melodic and harmonic. I’ll still be building up different layers in the music, but those additional layers have to work together harmonically.”

If the cerebral timelessness of Bach’s music attracted Scott, then it is part of a slower shift in Scott’s artistic make-up towards classic texts and influences, as opposed to darker and more gothic influences from earlier years. “In Inventions there are references to classic texts, like The Tempest or Paradise Lost, that wouldn’t be found in my other work,” Scott says. “There’s certainly more formality. In some ways the dance feels more self-reflective, and I find myself looking back on life and quoting other dances I made a long time ago.”

In 2014 Kilkenny Arts Festival commissioned Lear, which has since played in New York, London, Edinburgh, Dublin and Cork, with possible future dates in Germany and Spain. “That was [outgoing artistic director] Eugene Downes’s first festival, and we are really happy to be part of his first and last festival.”

Lear centres around Valda Setterfield, who plays the king, while three male dancers play the daughters. The 83-year-old dancer has a pedigree that goes all the way back to classes in London with Tamara Karsavina and Marie Rambert, via a career dancing in New York with Merce Cunningham and her husband, David Gordon, to now working with Scott and other contemporary choreographers, such as Boris Charmatz.

In Inventions Setterfield is joined by the Belfast-based dancer and choreographer Oona Doherty, who is increasingly winning attention for her roles, such as the young woman in Arlington, as well as her own choreography, such as Hard to Be Soft, which featured at the Abbey as part of Dublin Dance Festival in May. Last year, during the Edinburgh Fringe, Setterfield won a Herald Angel Award for her performance of Lear, while Doherty won a Total Dance Award for her solo Hope Hunt.

“Valda and Oona dance so well together,” Scott says. “A few weeks ago in rehearsals they improvised a duet that was outrageous, full of chattering and jabbering. It could have gone on stage straight away.” They are joined by the Irish Modern Dance Theatre regulars Kevin Coquelard, Mufutau Yusuf and Ashley Chen.

“It’s a great cast. They are different, but they all are daring. Valda is terrifyingly daring. Each one of them is a wild spirit, and there is sense of a misfit about all of them.”

With such an international cast, studio time was difficult to co-ordinate, and the first time the entire group got together was a short morning rehearsal in Dublin. “They went completely crazy! It was like unleashing this group of lunatics. And it was fantastic. They were all united, and they were all triggering things in each other.”

Whereas that kind of raw energy was enough to sustain some of Scott’s works in the past, Setterfield adds a leavening presence to works like Lear and Inventions.

“Something about her makes me do my best work. It’s still the same process. It’s still a crazy John Scott piece. I remember Kevin saying that dances with Valda feel written. She is always searching for clarity, and that comes through in the structure.”

Scott recalls an impasse during Lear rehearsals, when they were in search of the precise motivation for King Lear to be angry enough to go out in the storm. Scott decided to sleep on it, but Setterfield did not: the next morning he read an email from Setterfield, sent at 2am, that identified the page and line that had eluded them.

Scott mentions his proud sense of community and family around the production. “Ashley Chen first worked with me in 2004, but I’ve known him forever. Oona and I have a great working dynamic, and I danced in her Hard to Be Soft. And Kevin and Mufutau are like my sons. I’ve known them since they were very young.”

But there is a dark undertone in Inventions that perhaps comes from a fissure in the broader Irish Modern Dance Theatre family. “Somebody who danced with me for a long time went through a decline through drugs and neurosis. And that downfall really affected me. So there’s something related to Paradise Lost in this piece. Ashley and Oona play a couple who are falling into an abyss, and whereas that decline is the centre of the piece, there is also a sense of heaven. Valda has a positive centring function in the dance.”

Scott doesn’t intend Inventions to portray a jaundiced view of love or couples. Rather it is meant to convey the sense that, when all is not right, self-destruction can follow.

The duet form offers choreographers an antidote to solo self-obsession, but in Inventions the inspiration that feeds those duets also comes from valuing solidarity and empathy over individualism.

“If you have a company for 28 years, you are going to experience a bit of everything,” Scott says. “Dancers have got married, had babies, one or two have died, some have changed careers. And then there is this person that has gone into this terrible abyss. I suppose if you’re around long enough you’ll see everything.”