The Wizard of Oz: Joyful production blazes with power of original 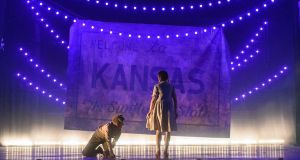 ‘The Wizard of Oz’ is being performed at Cork Opera House until August 26th. Photograph: John Allen

For a musical whose origins are so lost in a forest of derivatives that they do not rate a mention in the programme notes, this Opera House production blazes with all the staying power of L Frank Baum’s story. First published in 1900, there have been many variations on the theme but here ownership is established immediately with the band brightly conducted by musical director John O’Brien assisted by Philip Connaughton’s choreography for a sleek ensemble of dancers.

It may be superfluous to explain that a tornado and a very wicked witch have blown Dorothy and her little dog Toto far away from their farm in Kansas. Only the wizard can get them home again and it is their hopeful journey to the land of Oz which provides the lightly-hinted metaphorical resonance. Dorothy is an intrepid girl on the brink of adolescence and is trying to find her way not so much back home as away from it. Her unfolding fantasies take on a moral significance and if, as a well-known line from the text declares, there is nothing so depressing as boundless optimism, the contrast to the bouncing joy of this presentation comes in the performance of Simone Collins as Dorothy. Hers is a strong but wistful characterisation, enhancing the comedy while deepening her sense of wonder and bewilderment.

For the target audience the wonder flows through the cavalcade of songs, the engaging performances from the principals, Joan Hickson’s brilliant costuming and the oddly labour-intensive sets by Maree Kearns. While director Wayne Jordan ensures three hours of vigorously tuneful entertainment, some cavilling includes a Toto in the elastic but human form of Joshua Ellershaw and the setting of Dorothy’s Somewhere Over the Rainbow in a background of night and stars. Perhaps this is to suggest you make your own rainbow, and certainly this company, with its controlled riots of geographical witches, Tsarist Russian soldiers, lullaby and lollipop leagues, a tin man, a scarecrow and an apprehensive lion provides plenty of alternative rainbows.