The Lonesome West review: A tale of anarchic rural communities 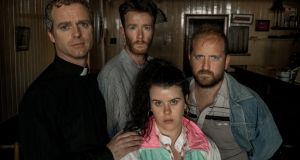 Although it’s only three years to the month since the Everyman Theatre hosted a Blood in the Alley production of The Lonesome West this new presentation from Everyman’s Artistic Director Julie Kelleher has the liveliness of something not recently experienced. It’s also true that Martin McDonagh enjoys offering something, or somethings, and especially some people, preferably not experienced at all. His ambiguity is seductive; one can’t help laughing even as absurdities deepen into suspected and then confirmed tragedy. The bleak and the black of anarchic rural communities drift through the conversations as a pair of competitive brothers score off one another in a carnal and potentially deadly rivalry.

The crude hilarity arises from casual revelations; was the shot that killed a father deliberate; is there even now a bullet still in the gun poised on the homestead wall; why is the Catholic church so forgiving of murder and so punitive of suicide. Andrew Holden’s half-demented Fr Walsh (or Welsh) has no answer to these ever-resonant questions triggered by John McCarthy’s Valene and Gus McDonagh’s Coleman. Their fatal idiosyncracies coil like unlit fuses through the dialogue; the political or social rectitude of its 1997 origin is only fodder for Martin McDonagh’s script, here acutely delivered in his Leenane argot, a language of incidental metaphor expanded by idiom and usage among these reluctant celibates.

It is through Amy McElhatton as Girleen that the bedrock of this supposed myth of rustic fury is excavated. Her confusions are reflected in designer Deirdre Dwyer’s wispy, wistful skyline and in the music and sound by Chris Schmidt Martin and the lighting by Brian Mitchell. In this presentation these hint at a different hinterland. Without them the play is badinage, close to burlesque and dominated by a gleefully grotesque domesticity.

Dancing with the Stars: public save rhythmless reverend Ray Kelly as Yewande Biala voted off
4