Rough Magic’s high-voltage staging of A Midsummer Night’s Dream addresses climate change, while Jim Cartwright’s ‘Two’ is more than the sum of its parts 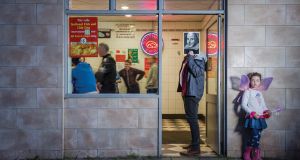 The course of true love never did run smooth, and electric current can sometimes alter. Shakespeare’s comedy of desire, magic and transformations has always offered us a way to marvel at inexplicable changes among lovers: the spurned who become adored, the chased who become abandoned, the friends who become foes. Rough Magic’s new co-production with Kilkenny Arts Festival, staged outdoors in Kilkenny Castle Yard, also uses the play to look at all-too-explicable changes wrought on the earth. “And through this distemperature we see/The seasons alter,” complains Titania, the fairy queen, to her squabbling partner Oberon. “And this same progeny of evils comes/ From our debate . . .” People are acting weird and so is the planet. Has Shakespeare anticipated climate change?

That might be pushing Bardolatry a bit too far (if we had to name the Shakespeare play with extreme weather, The Tempest and King Lear howl to mind first), but this supple, subversive comedy lends itself to innumerable readings and countless new emphases. Director Lynne Parker’s take is all about new energy, recruiting a new ensemble to perform its several roles and subplots, while imagining a broken world where electricity has rebelled, like the weather, against us, surging and leaping to perform tricks of its own. Maybe that’s what Shakespeare intended all along. The man was always leading the charge.

If anyone is looking for the template for multiple role-play comedies staged by an absolute minimum of cast members – and, let’s face it, these days who isn’t? – you might as well try Jim Cartwright’s 1989 play, Two. Set in a local Northern English pub in the 1980s, and traditionally staged somewhere similar, it sets two performers loose to realise 14 distinct characters between them, playing pub regulars who are anything but.

The main characters, a parsimonious Landlord and a gossipy Landlady, interact with a host of others, from a boy parked outside the pub who comes inside in search of his dad, to supportive, unfaithful and fractious couples, to an older woman on a break from caring for her dependent husband, wondering when it will all end. It’s grim up north, but the play, here performed by Niamh McGrath and Andrew Murray, has long been a favourite for its big, beating heart. This production occurs in a fully functional bar, serving the audience when the performance is not in progress. In the role of the clientele, even we have our part to play.