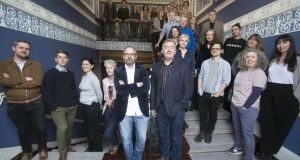 The competing playwrights with Gavin Kostick and Jim Culleton of Fishamble at the start of the A Play For Ireland process. Photograph: Photocall Ireland

Fishamble has announced the six shortlisted playwrights in its search for A Play for Ireland.

The six shortlisted plays and playwrights are:
Duck, Duck, Goose by Caitríona Daly
In Passing by John Doran
Wreckquiem by Mike Finn
A Line of Work by Marina Ni Dhubháin
Ballybaile by Jody O’Neill
The Alternative by Michael Patrick & Oisín Kearney

As part of its 30th anniversary last year, Fishamble: The New Play Company set out to find one, big, ambitious play that bursts with humanity and tackles a subject about which the playwright feels passionate – A Play for Ireland that captures the zeitgeist and demands to be produced.

Submissions were invited from across Ireland. The initiative has seen Fishamble develop 30 new plays with playwrights throughout the island of Ireland during the first round of this initiative, and later this year will result in the production of one very special new play.

The shortlisted plays will be workshopped with the Fishamble team and then, in April the winner will be announced. A Play for Ireland is run in partnership with six venues, Lime Tree Theatre & Belltable, Draíocht, Everyman, Lyric Theatre, Pavilion Theatre, Town Hall Theatre.

“Fishamble has been honoured to work on the development of 30 plays throughout 2018 with a wonderful group of playwrights,” said Jim Culleton, artistic director. “It has been difficult to reduce this selection to the shortlisted six. We are thrilled to be working on the further development of this half dozen plays, with our partner venues, and look forward to what the results will be.”

The shortlist in detail

Duck, Duck, Goose by Caitríona Daly - Draíocht, Blanchardstown
In an attempt to help his friend, Chris Quinn becomes deeply embroiled in a rape allegation. When rules are changing and confusion reigns supreme, Chris struggles between loyalty, love and doubt.

Caitríona Daly is a playwright from Dublin. She is a graduate from both The Lir’s MFA in playwriting and the Royal Court’s Young Playwright programme. Her plays have been produced in Ireland, England, and Scotland. Most recently she was nominated for the Fishamble New Writing Award at the Dublin Fringe Festival for Normal in 2017 and an Irish Times Theatre Award for Best New Play for Test Dummy in 2016. Caitríona is currently a participant of Six in the Attic, an Irish Theatre Institute Resource Sharing Initiative, from 2018-2019.

In Passing by John Doran - The Everyman, Cork
In Passing explores Ireland’s relationships with community, substance abuse, self-expression and religion. The setting is an over-used community hall somewhere in Ireland.

Wreckquiem by Mike Finn - Lime Tree Theatre and Belltable, Limerick
In Wreckquiem, as developers close in on his ramshackle record shop, Dessie Fitzgerald and a motley crew of misfit customers fight a rearguard action in the face of ‘progress’.

Mike Finn is a playwright, screenwriter and actor who holds an MA in Scriptwriting from the National Film School and has had over fifty scripts produced in various media. Among his plays are Pigtown (winner of the Stewart Parker Award and produced Off-Broadway), The Quiet Moment, The Crunch, and Shock & Awe, (Island Theatre Co.), Ellis Island (Theatre USF, Florida), Stories (LYT), Langered and One (Balor Theatre Co.), The Big Question (Institute of Excitement, Hampstead Theatre, London), We Are What We Witness, The Revenger’s Tragedy and Porkville (Bottom Dog) and Life In 2 Syllables (Fishamble, seen in Dublin, New York and Washington and described by The Guardian as “ingeniously written”). Mike also wrote the book for the musical The Unlucky Cabin Boy (Guna Nua) and co-wrote On The Wire nominated for a ‘Best Production’ Irish Times Theatre Award in 2014. In April 2019 Mike’s new play about the Limerick Soviet, Bread Not Profits will be produced in Limerick. For television, Mike has co-written extensively with Pat Shortt including thirty six episodes of the IFTA nominated Killinaskully, seven episodes of Mattie and the pilot of Behind The Crystal Ball. Mike wrote the radio drama It’s A Worthless Life for RTE 1 and Little Bits Left Over for Limerick 95FM. In 2017, Mike was Theatre Artist-in-residence at the Belltable in limerick.

A Line of Work by Marina Ní Dhubháin - Town Hall Theatre, Galway
A Line of Work is the story of a woman who lives agelessly through three generations of social and ideological transformations in the Irish workplace.

Marina Ní Dhubháin works between Galway City, where she is a theatre researcher at NUIG, and Dingle in West Kerry, where she develops work with community theatre group Aisteóirí Bhreanainn. An Irish Research Council scholar, her research areas relate to memoryscape, documentary and oral history performance, with a particular focus on practice-led applications. Her Irish language theatre projects have focused on play with archival sounds, devising through translation from literary scripts and traditional story-telling. Marina is a member of the recently established theatre-making collective Garraí an Giorria who are developing a range of new pieces for the professional theatre, as Gaeilge.

Ballybaile by Jody O’Neill - Pavilion Theatre, Dún Laoghaire
Ballybaile is an attempt to represent Ireland in the current moment. It consists of 17 short plays, each named after a government department that explore how decisions and policies made at a governmental level impact on the lives of citizens. Within this structure, it investigates themes of community, isolation, family, climate change, identity, poverty, love and loss.

Jody O’Neill is a writer and actor, currently based in Wicklow where she spent much of her time learning about Pokémon, science and the universe from her seven-year-old son. Jody’s interest in theatre began when her mother was a member of Haulbowline Theatre Group in the 1980s and they would often take the boat from Cobh to Haulbowline to see their productions. She went on to become a member of Activate Youth Theatre and then completed actor training at Trinity College. As an actor, Jody has worked extensively in theatre, television and as a voice over artist. Jody wrote her first short play for Fishamble’s Whereabouts in 2005. Since then, as well as writing for theatre, she has spent several years working as a story and script writer for RTE’s Fair City. Currently, she is developing work that promotes autism acceptance and inclusion. What I (Don’t) Know about Autism will be produced in early 2020, funded by the Arts Council and Wicklow County Council.

The Alternative by Michael Patrick & Oisín Kearney - Lyric Theatre, Belfast
The Alternative envisions a world where modern-day Ireland remains unpartitioned as part of the United Kingdom. The action takes place on the eve of an independence referendum asking if Ireland will finally take its place among the nations of the world. But the arguments aren’t as clear cut as you might think.

Oisín Kearney (director & writer) and Michael Patrick (actor & writer) run Pan Narrans Theatre in Belfast. Together they wrote the award-winning My Left Nut, which was developed through the Show in a Bag programme run by Fishamble, The ITI and The Dublin Fringe. Oisín directs both theatre and documentary films. He localised Willy Russell’s script of Educating Rita, setting it in 1980s Belfast for the Lyric’s production in 2016-17, and was Assistant Director. Oisín has Assistant Produced a number of feature documentaries, and his first feature as Director will be released later this year. As an actor Michael has worked with The Abbey, The Lyric, and is currently in rehearsals for the Royal Shakespeare Company’s 2019 season. Together they’re in the BBC Belfast Voices screenwriting scheme. Through this they’ve written for BBC’s Soft Border Patrol and were shortlisted to write for BBC 3’s The Break.
fishamble.com