'What is more trustworthy than nature?'

The Flora Fauna Project, a new series at D-Light studios, explores how we affect the environment and vice versa 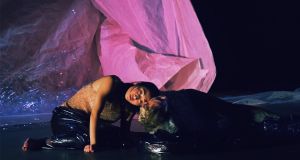 Imagination led architect and photographer Agata Stoinska to visualise a photography and film studio when she first entered a derelict car garage and woollen mill in Dublin’s north-east inner city. Ten years later, the venue supports emerging artists and start-ups, and generates income through photoshoots and filming. The old garage’s ramp, built for clapped-out bangers to be repaired, is used by sparkling showroom cars making their way to be photographed in the light which floods through the glass roof and bounces off the high, gleaming white walls.

This success came from the relationships nurtured – not just with the local community who have grown to embrace the building and its ideals, and more importantly, become active users – but also with artists and creatives who have benefitted through its office spaces and studios.

And yet all is not complete. The building still needs renovating and as its physical structure slowly evolves, so too does the type of art that gets created within its walls. It is still imagining its future and in search of new relationships to create that art.

The body and its environment

Imagination and relationships are also at the heart of Flora Fauna Project, which started life as a performance and has expanded to include talks and workshops. Created by choreographer Maria Nilsson Waller with music by Gill, it was born in D-Light, when Nilsson Waller became a resident artist and Gill spotted her with bits of paper spread around the floor of the studio.

“I looked at them and thought that these were all themes that I was also grappling with,” say Gill. “It wasn’t just questions around music or dance, but more general questions about art, gender and politics. I felt like these could have been my notes.”

Environmental degradation was also a theme, being an issue represented in Nilsson Waller’s choreography. The Swedish native has been resident in Ireland for some years and her investigations into shifting geographies, myth and the natural world are unique within the dance community. Not since, perhaps, Dance Theatre of Ireland’s works in the 1990s has an Irish-based dance artist consistently mediated the two-way relationship between the body and environment: how the body changes its environment and how the natural and built environment writes on to the body.

More importantly, these investigations regularly take place outside the theatre and so she created choreography for a variety of performers, from professionals to schoolchildren. In 2015 she created a dance, See the Man, with Östersunds FK, a professional football team in the Swedish first division.

The Flora Fauna Project has gathered a similarly diverse group of participants. A theatre performance for professional dancers has been created and premiered after a residency at Riksteatern in Stockholm. (It will be performed in Dublin later this year.)

“Now that we created the dance show, our focus has changed to storytelling and trying to create that intimate space with the audience,” says Nillson Waller. “It is almost like creating an installation in interaction with the audience.”

In February, 80 students will perform their own version of Flora Fauna in Ballyfermot library as part of Dublin City Council’s Children’s Art in Libraries Project. A series of talks will take place on Tuesdays during Lent at Christ Church Cathedral, as well as workshops for members of the public at D-Light Studios.

Rather than preach the dystopian outcomes of present behaviour – like literature’s climate fiction or cli-fi – dance offers the participants the chance to physically connect and engage with the natural world. Choice and consequences will feature – no idealistic Solarpunk here – but none of the events will be prescriptive in solutions or behavioural change.

“We certainly don’t want to pass judgment,” says Nilsson Waller. “Rather, we want to reconnect the body to nature.”

This meant Nilsson Waller and Gill both had to physically reconnect with their artforms.

“Of course, us dancers have bodily intelligence, but it is often never called on,” says Nilsson Waller. “We think of our bodies like instruments. ‘Tell me what to do and I will do it.’ What we needed to do was override that instrumental behaviour and humanise them.”

Gill also had to physically connect with her music-making, frequently a cerebral task of creating beats on a computer. Singing remained the only means of physically expressing her music, but during a Hatch residency at Dance House she began moving with the dancers as part of warm-ups and creative tasks. Working collaboratively changed her music.

“Two years leading up to the residency I had been in deep isolation writing my own album,” she say. “I had collaborated previously, but it was more like tennis. I would write a bit and send it to another person, who would write another bit and send it back. For Flora Fauna I created music late at night, almost like a side project. It grew into a kind of sound diary, the music of my sub-conscious, what I sounded like on the inside.”

“It sounded a bit like minimalist 1980s sci-fi or computer game music,” says Nillson Waller. “Which is appropriate, since a lot of 1980s sci-fi films involve scary things that come from strange botanical forms. [In recreating retro-horror, the Duffer Brothers created the demogorgon in the Netflix series Stranger Things.] This fear of the wild is another manifestation of how we have lost our physical connection with the natural world.”

“Ultimately it is about listening and learning,” says Gill. “What is more trustworthy than nature? In the natural world, if it is then it is. But modern life draws us aways from those certainties.”

Redressing this will require building new relationships, both with other people and the environment. But an ideal future also needs imagination.

“We just need to imagine it, and it will happen. And we need to start imagining better.”