Heather review: If you shouldn’t judge a book by its cover, should you judge it by its author? 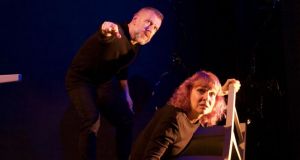 ★★★☆☆
Bewley’s Café Theatre, Dublin
If you shouldn’t judge a book by its cover, does it make any more sense to judge a book by its author? It was a question raised last week when the novelist Dan Mallory, who writes as AJ Finn, was exposed as an arch fabulist. But in Heather, Thomas Eccleshare’s shape-shifting two-hander from 2017, about the retreating author behind a series of sensationally popular children’s books, it becomes even harder to separate the tale from the teller.

Although not quite as important as the form it takes, Eccleshare’s play contains its own share of twists and revelations, rationed out in three distinct stages. (For those who prefer total suspense, there are mild spoilers ahead.)

In neutral black costumes that suggest their roles are lightly worn, Aenne Barr and Dermot Magennis read an email exchange from cue cards. A publisher, Harry, and an author, Heather, discuss the catch-fire success of her supernatural fantasy Greta and the Pen of the Necromancer. “I don’t think I’ve seen anything like this happen so quickly,” Harry writes, as though JK Rowling never happened.

Eccleshare is keen to provoke thought: can the creations of a villain be themselves wholly innocent? But his own invocations of race suggest he is also out to push buttons

Heather claims motherhood, and later cancer, as a reason to shirk publicity. But, it will surprise no one to learn, hers is much more terminal condition of the pseudonym.

Here nobody is what they seem: not Heather, revealed as Tariq, a prisoner incarcerated for some of the worst crimes imaginable, not Harry, and – when the book series stalls against the controversy – not even the public. “They want to know what happens,” Harry says.

Eccleshare’s wider point is about the right to be someone else, whether through acts of imagination or rehabilitation. Liam Halligan, who directs this staging, seizes it by allowing his performers to slip unfussily and lucidly between rolls.

Eccleshare is certainly keen to provoke thought: can the creations of a villain be themselves wholly innocent? But his own invocations of race, left entirely untouched by the play and production, suggest he is also out to push buttons. Is Tariq a sensitively drawn figure of flesh and blood or just an overcooked bogeyman?

Concluding with an excerpt from the book’s film adaptation, laced with the technical language of a shooting script (“Ext The Cave of Shadows”) but engagingly performed as a breathless Hollywood denouement against a tremendously dynamic composition by Denis Clohessy, the play attempts another kind of doubling. It’s ambitious to ask the tropes of a generic fantasy to also serve as revealing metafiction, slipping clues about the writer’s psychology into his story of a hero and villain who become hard to distinguish.

The assured production suggests a glib reading, blurring roles, stressing redemption and a duality finally reconciled. But it allows a more thorny interpretation too: that under the author’s spell, here in this cave of shadows, we see what Heather wants us to see. In the end, perhaps, we all choose our own story.