No Child 2020: Put the kids in charge – how the Ark turned to children for ideas 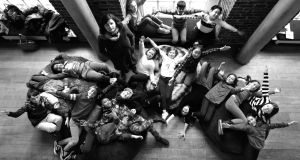 At the Ark: Kate Heffernan with members of the centre’s children’s council. Photograph: Dara Mac Dónaill

No Child 2020 is an initiative by The Irish Times providing a sustained focus on child welfare and children’s issues. We explore the problems facing children in the Republic today, and offer solutions that would make this a better country in which to be a child. You can find out more here

In 2016, when Kate Heffernan first began thinking about what would become Peat, her new play for children, her first port of call was a national school in Portlaoise, Co Laois, where she invited a group of third-class students to “have a frank conversation about the way in which they see the world.” Heffernan only had a loose idea of what she wanted to explore, “how we think about our place in history”, and she hoped the young people would help her to uncover a more concrete form for the play. “We tend to think of children as existing in a separate sphere from us,” she explains in the beanbag-strewn Long Room of the Ark, the children’s cultural centre in Dublin’s Temple Bar. “But actually, they share the same world as us, even if we have a different frame of reference than them; we share the same experiences, even if we articulate them differently.

“I was interested in exploring a sort of metaphysical idea: the enormity of the world and how we accommodate our place in it. And if you want to have that conversation with children, the best place to start is by actually having a conversation with them about it.”

This idea – of consulting children about artistic work that is being made for them – is a fundamental part of the ethos at the Ark, which in the last three years has been working towards embedding children in all aspects of its operation, from theatre-making to policy-making, and from its daily operations to its future plans.

As the Ark’s director, Aideen Howard explains: “The idea for the Ark came into being just after Ireland ratified the United Nations Convention on the Rights of the Child.” Article 31 of the Convention recognises the right of the child to “participate fully in cultural and artistic life,” and having a dedicated cultural centre for children showed a vital commitment to that principle.

If children have the right to be heard and for their voices to be given due weight, they have ample capacity to participate in everything we do

However, as Howard explains, the Ark has become increasingly aware that “the rights set out in the convention are actually interdependent. It is easy to say that children have a right to great art – that argument has already been made and won – the question is how can we deliver that. If children are the right-holders, adults are the duty-bearers. It is our responsibility to ensure that they can claim their rights in a productive way.”

We shouldn’t just be thinking about access, she says, but about process. “How do we make that work?” In particular, article 12 – the right of children to have an opinion – resonated with how the Ark was evolving as institution.

“If children have the right to be heard and for their voices to be given due weight, they have ample capacity to participate in everything we do. It is not enough that the work is being made for them. They should be informing how that work is made. But it is not just about the individual works of art: they can fundamentally shape the processes by which we develop as an organisation.”

As Howard explains, the Ark use a four-part process called the Lundy Model of Child Participation through which to engage with children. The methodology centres on the principles of space (providing a safe opportunity to express their view), voice (to be facilitated to express their view), audience (that they must be listened to) and influence (their opinions must be acted on as appropriate).

For Howard, this last principle is particularly important: young people “should be able to see that they that have made something happen. Or, crucially, that something didn’t happen, so they can interrogate why.”

It was to this end that the Ark established a Children’s Council in 2016. Children from the Dublin city area were invited to apply to be a part of the Ark for a calendar year. Working with facilitator Shaun Dunne, the council would have access to exhibitions and performances at the Ark, and be encouraged to engage even deeper through workshops and question-and-answer sessions; for example, the children were directly involved in the development of Peat.

After Heffernan’s initial consultation with primary school students, she wrote a 10-minute piece, which she performed for the children’s council. Some of the feedback went on to shape the form the play would take in very concrete terms.

“One of the kids literally said, ‘don’t bother with the story, just play the game instead,’” referring to a game of “would you rather?” that one of the characters played at the start of the piece.

“So I decided to just do that, as much as I could. It made sense: to use the game as vehicle for that character to negotiate their way through the world. That’s what ‘play’ is all about when you are a kid.”

Heffernan found the feedback session particularly enlightening. “I was expecting the [children] to be honest and brutal in their feedback, but actually they were almost afraid to talk.”

For Heffernan that reluctance spoke volumes. “They were already locked into this social construct that adults know better – so it took some coaxing. But the fact that they took some coaxing reinforced for me the responsibility to take on board what they said, because to not do so would totally betray that trust.  How you think about children dictates the experience you have with them – its a self-fulfilling prophecy – and these children were my collaborators.”

By encouraging debate and discussion about themes posed by artistic work, as well as the way the Ark operates as an institution, the function of the children’s council extends beyond artistic engagement, encompassing “active citizenship and engagement” too.

I spoke with two members of the 2017 to 2018 children’s council, 11-year-old Luka Delaney and 12-year-old Conn Butler . They loved all the various artistic disciplines they were introduced to – from glass sculpture to film – but their favourite part of their year was the opportunity to ask questions of Taoiseach Leo Varadkar in Leinster House. The questions were sourced through an open call to the broader nation of children, and the children whittled down hundreds of suggestions to just 11. As Delaney says “it wasn’t a personal thing. We looked at the questions people our age – and even younger – wanted to ask and put forward the questions that we thought were the most important.”

Delaney says his experience on the children’s council “let me meet some really cool people that I would never have had the opportunity to meet before, and to see some very cool plays and things and to give unhurtful feedback to people. It can be easy to have an opinion in your head but it’s more difficult to say it.” As a result of being asked for his input directly, he feels that he is, “definitely more confident. I learned how to express myself better, because people really cared about what you had to say.” Butler agrees: At the Ark “what children think seems to mean a lot more, and that’s really cool.”

One of the parting gifts that the children’s council of 2017 to 2018 left for their peers was the idea for a festival of children at the Ark, the first iteration of which will take place in June. The council wanted to reach outside their own group to include other children in the organisation of the festival, so they invited the public to choose a name for it. After vetting all the entries they chose one: Right Here, Right Now. Children from all over the country have also been invited to help design the logo and artwork, and budding creatives still have the opportunity to do so, as the competition closes on February 28th. See ark.ie for details. Right Here, Right Now runs at the Ark from June 14th to 16th.

Peat runs at the Ark from February 28-March 31. There will be an evening performance for adults on Tuesday March 12th

Bearman of Buncrana: not the odyssey into rural Ireland’s heart of weirdness we wanted
5