Dublin Fringe Festival: Some narrative techniques are a stretch too far for these skilled dancers 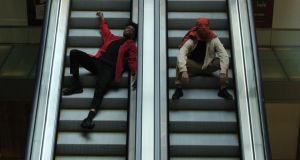 Fable: each of the five sequences take their cues from tales already on the borderline of myth – pumped-up news reports, political conspiracy theories or dubious cultural phenomena. Photograph: Cathy Coughlan

Project Arts Centre
★ ★ ★
In Fable, the new dance-theatre company Human Collective take tentative steps towards uniting the energies of street dance and the craft of storytelling for young audiences. Against dwarfing video projections, a masked, stooped figure sows seeds while three combatants wriggle up behind him like mythic vermin. Each of the five sequences take their cues from tales already on the borderline of myth – pumped-up news reports, political conspiracy theories or dubious cultural phenomena – but, limber as these skilled dancers are, some narrative techniques are a stretch too far.

In one duet of coercion and control, manipulation is archly conveyed through break-dancing, a white-coated sorcerer spinning his stunned captive on his head, but other “chapters” are laboured and unclear. A simplistic riff inspired by a notorious Polish plane crash, for instance, is confusing from its title, The Changelings of Smolensk, to its conclusion, while a heavy ponderousness and ragged tech tend to obscure the strength of the dancers. Tellingly, one solo sketch of coiled isolation, inspired by Japan’s so-called herbivore men, has a more focused command of space, the display enhanced by keeping the story straight.

Melania Trump: ‘A sphinx with a rubber eraser in place of a tail’
5