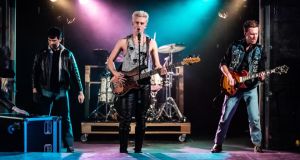 Good Vibrations: the full-throated spirit of punk is alive and roaring in the Lyric Theatre auditorium

Lyric Theatre, Belfast
★★★★
When you hear the words “stage musical” you don’t tend to imagine a posse of young punks belting out a song so fiercely that the floorboards shake. But that’s what happens on Wednesday night at the Lyric Theatre in Belfast, at the opening performance of Good Vibrations. It is a glorious moment.

Adapted from the award-winning film, Good Vibrations is the story of Terri Hooley, who, with a mixture of reckless abandon and unquenchable hope, opened a record shop on “the most bombed half-mile in Europe”, Great Victoria Street in Belfast, in the 1970s. There he discovered the underground punk scene and its joyous, anarchic ability to transcend tribal boundaries and bring people together, even as the city burned. Hooley became an unlikely impresario, putting on gigs and producing records in defiance of the bombers, the police and the snooty attitude of the mainstream music industry in London.

In the movie Hooley was played with compelling charisma and depth by Richard Dormer: you couldn’t take your eyes off him. This can’t be easy for Aaron McCusker, as the stage Hooley, but he visibly relaxes into the role and makes it his own. And although there’s always a risk that theatrical adaptations will descend into superficial pastiche, its writers, Colin Carberry and Glenn Patterson, made the transition with style. Under the direction of Des Kennedy they turn their original screenplay into a stage performance of fast pace, high energy and sardonic good humour. “You’re carrying on like Led Zeppelin,” Hooley’s friend Dave, dismayed at his alcoholic excesses, says. “That is f***ing low,” Hooley growls.

Sean Kearns is a class act, providing the substance, subtlety and presence needed to underpin the high-octane antics of the younger members of the cast

Of course, if you’ve got a stage you can also have live music. This starts with a rather tentative rendition of The Outcasts’ Just Another Teenage Rebel, and there is an unfortunate sound glitch during the opening lines of Belfast’s anthem, Teenage Kicks, by The Undertones, but by the time we get to Stiff Little Fingers’ Alternative Ulster – the one that makes the floorboards shake – the full-throated spirit of punk is alive and roaring in the auditorium.

A special mention must go to Sean Kearns, who shows impressive versatility across a range of roles, including Hooley’s taciturn father, George, a sinister RUC officer, a God-fearing Orangeman, and the late BBC DJ John Peel. Kearns is a class act, providing the substance, subtlety and presence needed to underpin the high-octane antics of the younger members of the cast.

Terri Hooley himself takes to the stage at the end of the show, joined by two of the original Outcasts. Hooley sweats that the fight will not be over “until we beat the bigots, racists and homophobes”. “Power to the people,” he shouts. The audience, caught somewhere between tears and laughter, respond with an ecstatic cheer.