The magic and loss of coming out in rural Ireland

Dublin Fringe Festival: Performer’s new show is about growning up gay in Roscommon 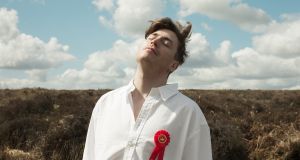 Xnthony will perform his new show ‘Confirmation’ at this year’s Dublin Fringe Festival.

Roscommon-South Leitrim was the only constituency in the country to vote against same-sex marriage. Roscommon was quickly dubbed Ireland’s conservative backwater, and it became the subject of jokes and ridicule across the country.

That is something that Anthony Keigher, who goes by his stage name Xnthony, wants to change. He was born and raised in Roscommon, and continues to be fiercely protective of his home county, even though he has now lived in London for a number of years. Despite this pride, he also readily admits that his experience growing up gay in Roscommon was not always easy, and was often “complex”.

It is this story that is the subject of his new musical memoir, Confirmation, which is debuting at the Dublin Fringe Festival in September.

Confirmation juxtaposes two central events in the life of Xnthony: his Confirmation, which he made when he was 12 years old, and the marriage equality referendum, which happened when he was 26. He describes it as “a pop concert with musical attributes and theatrical tendencies” and is hoping that through this, he might be able to capture something of the experience of being gay in rural Ireland, and what happens when a child loses their magic.

He decided to hook the show on the idea of the sacrament of Confirmation because he remembers that period of his life as the time “just before the magic was ripped away.

“You get into teenage life and things get a bit muddled. You get into your 20s – muddled again. I’ve always been striving to be that eight-year-old, or that 12-year-old, just before everything changed. Before I became aware of my sexuality, just before your magic is whipped away from you.”

While Confirmation is about losing magic, it’s also about getting it back again – or maybe even recognising that everybody has a bit of magic in them.

“I think that magic is inherently linked to gayness, to being other, to being rural, to being slightly different, because our differences are magical,” he says. “When you’re a kid and you’re gay, you have this bizarre energy, and people are looking at you like you’re a bit of a witch. The show explores that potential magic that we have, that we perceive as being taken from us.”

For Xnthony, losing his magic was an upsetting – and sometimes violent – experience as he entered his teenage years.

“I came out when I was 16, but that didn’t make it better. That didn’t make the harassment better. I did have a lot of protection from the people above me. I had a principal who took me out after I got into a fight, and he said, ‘Never change who you are for anybody.’

“I remember being beaten up at my grad, and the whole thing was hushed. It was this attitude of ‘don’t make a fuss about it’. And that’s so, so stupid. We think that the story is over, the book is closed. We’re now on the front of Tatler. We’re white, we’re married, and we’re sorted. But it’s not done for me.”

He says that when he came out at 16, it was because he had no other choice.

“I felt like I wasn’t being real. I just felt like there was more to me. I was watching the lads having fun, and I was like, ‘I can’t have fun because that’ll show something that I don’t want them to see. And then I just realised, ‘I need to tell people.’

“Most people accepted it pretty quickly. It just became more of an issue later on, when other people’s issues made it harder for me. It was nothing to do with me in the end.”

He was one of only three openly gay people in his secondary school, and he was the first one to come out, too. Now, he says he thinks that “the whole of Roscommon is practically gay at this stage”, adding that many people he went to school with came out as gay in later years.

Confirmation also looks at what it was like to be a gay man from Co Roscommon when the county voted No in the 2015 referendum.

“We were all gunning for a Yes and it was extremely important to us,” he says. “My sister and I were both in London when the results came out, and we were so thrilled, and then horrified when Roscommon voted No, and really shocked and kind of upset and hurt. I started wondering, who voted No? Was it people I knew?

“I started to look into it, and I realised it was a much more complex situation – almost a bit of a protest vote, or a hospital vote, with the hospital being very valuable. I learned that things aren’t so black and white. But then I started to think about my home, and about how people started to turn against Roscommon as a place, as a community.

“There’s always been this talk of Roscommon being sheep-stealing county, this toxic branding. I was in Edinburgh last August touring and a girl asked me where I was from, and she had just seen one of my shows which was super camp and fun. I said Roscommon, and she was horrified. She just couldn’t believe it. She literally said:‘I want my money back.’”

Today, he says he has let go of the things that he went through as a teenager, and this is part of what Confirmation will explore, too.

“As a kid I created my own world, and as an adult I created another world to exist on stage, to create my own magical world. Confirmation is kind of an acceptance of that.”

He also wants people to know that, despite some of his bad experiences growing up in Roscommon, he still considers it a safe place where he is supported. Roscommon County Council has been supporting his work for years, and Roscommon people go wild for his camp, overblown performances.

“When I performed Douze in Roscommon, everyone said, ‘It’s going to fail. You’re going back to Roscommon? The place that voted No? They don’t like you.’ But the show sold out. A 75-year-old woman in the audience slapped my bum – with my consent. They came out of the arts centre saying, ‘I’ve never seen anything like this before.’ These people have amazing taste, but people keep shutting it out because they have a view of somewhere as being backwards. In the arts, you just have to knock on the door and people will come down.”

Xnthony is excited to bring the show to the Dublin Fringe Festival, and to see what people back home make of it when he performs it in the Roscommon Arts Centre.

“The whole show explores that potential for magic that we have, that we perceive as being taken from us, and actually, we have it all along. I’m trying to lend that to everyone in Roscommon.”

Confirmation is at the Lir Academy Studio One from September 17th–22nd. fringefest.com