Dublin Fringe Festival: shows to catch while you can

The latest reviews including Birdy, Everything Now, Kicking All The Boxes, Raven Eyed and MDLSX 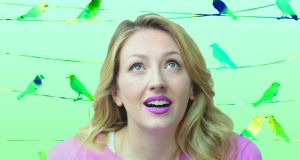 When the tyrannical President Liz bans music throughout the land, it falls to a ragtag band to try to restore some harmony. Such is the charmingly simple premise for this family show from Eccles Theatre Group, performed on a pop-up-book landscape using puppetry and live music. It is a score for adventure, comedy and song, but it also affords writers Jane Madden and Ross Gaynor grace notes of alliances, resistance and resilience, deftly addressing two audiences at once.

Ciara Ivie plays the toothsome Birdy, who searches the woods for a siren diva, Celine, whose powers might save the day. On her quest she meets an anxious chicken, Cluck (James Murphy); a conflicted hepcat, Jazz Fusion Fox (Roseanna Purcell), whose animal instincts threaten to tear the band apart, starting with Cluck; and Finbar Doyle’s loved-up Techno Turtle (tortoise, actually) whose electronic evangelism could strand everyone in a limbo of repetitive beats.

Director Davey Kelleher ensures a light touch to the telling and the social satire, given an absorbing focus by the cast. Like Dorothy’s discovery in Oz, there’s something cheering and motivating in Birdy’s late realisation that they are the heroes they’ve been looking for.

Back in the sixties, “Living Theatre’s ‘Paradise Now” tried to breach the boundaries of conventional theatre. Their stages teemed with voice, sound and movement bringing physical theatre into focus. Here, 50 years on, John Scott’s new work, “Everything Now” for Irish Modern Dance Theatre, in which he references the other, explodes with a similar mix of non-narrative, high-energy dance, voices and music. His fine, multicultural cast put their diverse bodies on the line with compulsive athletic performances.

The company, led by a terrific quartet of dancers Kevin Coquelard, Maurice Ivy, Sebastiao Kamalandua and Ryan O’Neill is complemented by a “migrant chorus” (as Scott calls them) into a fluid, intuitive ensemble. Together they evoke a struggle for identity in a cacophonous stressful world with non- stop news, obsessive instagramming and alien, bland soundscapes.

The movement is beautifully and simply grounded; the barefoot dancers stamp, march and beat out time, getting close to the earth, reclaiming territory and recalling their own music and rhythms. Occasionally interrupted as they try to bridge gaps between past and present, they succeed in raising moments of pure joy, with phases of sheer unadulterated physical dance.

Kicking All The Boxes

There are times during Liz Fitzgibbon’s vibrantly performed, but slightly confusing, one-woman show that the title of Luigi Pirandello’s famous play springs to mind, albeit in paraphrased form: not so much 'Six Characters in Search of an Author' as 'Six Scenes in Search of a Story'. Okay, maybe more like a dozen, but either way, a smooth narrative arc is not the chief virtue of this piece, developed by Fitzgibbon with Mikel Murfi, about a kick-boxing single mother contemplating her fractured, fractious life.

Celebrating her 30th birthday, Naoise revisits the moments that have brought her this far, as she juggles her chaotic personal life with an insecure professional one, her anger management issues exacerbated by past experiences. Each vignette thrums with inventiveness, the vividly realised setpieces full of sharply observed humour and understated drama. But the scenes don’t pull together to produce a satisfactory resolution, or even a coherent central protagonist: sometimes it seems like Naoise is less one person than, well, six characters in search of a life. However, such is Fitzgibbon’s energy (she kicks and boxes relentlessly), versatility (she portrays several side roles) and commitment that it’s a joy to watch her character trying to find herself, whoever she is.

The winds are howling inside an anonymous, dank warehouse space where we have been led from the shimmering glasshouses of the docklands. There are sounds of dripping water, of metal suddenly crashing on metal, as in a gothic ghost story. Anything can happen in Loosysmokes terrific new creation.

Blotches on the brick wall become slithery figures writhing on chairs suspended from the roof, crawling up and down the walls like feathery lacy spiders. This small aerial /circus/art collective have created another unique theatrical half world, mesmerising and atmospheric, allusive and seductive.

Twisting ropes sway into the half light, a trapeze is suddenly alive with two figures who tumble, arch and precariously dangle. These balletic shadowy feats create one of the many thrilling and scary visuals. A sinister puppeteer appears, entangling the hair of his two Coppelia-like marionettes in strands of rope. A whiff of hairspray and a snatch of the shipping forecast bring momentary shots of reality. But you swiftly want to return to that other upside-down world: to the acrobatic figure swooping from the chandeliers , the guttering candles, the eerie mystery of it all.

Miss it at your peril.

“What are you, anyway?” someone asks Cal, the protagonist of Jeffrey Eugenides’s novel, Middlesex. In Sylvia Calderoni’s solo show for the Italian contemporary theatre company Motus, which interleaves Eugenides’s text with Calderoni’s own searching biography, it is a question about gender and identity that both the performer and the character deliberately resist.

Built up along a discerning soundtrack of alternative rock music, which Calderoni DJs, the hyperkinetic performance incorporates family videos of her androgynous youth, interspersed with live footage of her thin and muscular frame which can recall Iggy Pop’s punk masculinity or the gender subversion of David Bowie. That makes Calderoni’s body both the show’s subject and its canvas, accommodating projections, manipulation and, in one strikingly violent sequence, a laser bisection. The music makes a similar point to a featured lecture on trans identity, or the bravado of the solo performance: all are towards the discovery of an image that fits, that deserves recognition.

Eugenides’ Cal is finally on a tumultuous journey of self-discovery, and if Calderoni’s performance becomes overstretched it is because she follows him too unstintingly. The confidence of the performance is to see someone who has undergone that journey, and arrived in complete command of themselves.

Show me the Monet: Banksy comment on consumerism fetches £7.5m
10