Everything I Do review: Heartbreak goes solo in this ‘live concept album’

Dublin Fringe Festival: The end of love feels like a broken record for Zoe Ní Riordáin 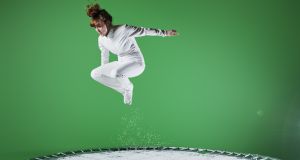 Everything I Do: Alone on a trampoline as marked as a lunar surface, Zoe Ní Riordáin has lost her support

Project Arts Centre, Cube
★ ★ ★ ★
Misery may love company, but in Zoe Ní Riordáin’s one-person performance, a “live concept album”, heartbreak prefers to go solo. Alone on a trampoline as marked as a lunar surface, she has lost her support. The end of love feels like a broken record, full of borrowed lyrics. “Since you’ve been gone I can do whatever I want,” she sings over the slow jangle of You Make Me Weak. “Wait, they don’t love you like I love you,” goes a pulsing synth number.

In an outfit as white as a cosmonaut’s, Ní Riordáin presents a dry, self-aware persona, where even pain is postmodern: “I can’t respond with any words that you haven’t already heard,” she sings, as though overwhelmed by back catalogues. Anyone fresh from a bad breakup will recognise the sensations, oscillating between anguish and repudiation. But anyone who has overcome two or more may want distinguishing details and more elaborate songs. Under Maud Lee’s direction, Ní Riordáin steadily achieves recuperative vigour in music and movement, but, new as it is, the journey feels like a cover version.

Marian Keyes: ‘I thought when I stopped drinking my life was over. It was just beginning’
5