Brendan Grace: His big break came when he gave the gig of his life for Frank Sinatra

Grace was a pioneer in Ireland, writing and performing his own comedy as a headline act 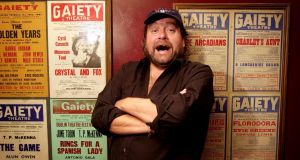 Brendan Grace, who died today on July 11th at the age of 68 came up the old-school way, serving a comedic apprenticeship and honing his act by travelling the highways and byways of the country in an effort to convince venue owners that a comedian could headline a night’s entertainment and not just be the opening act for a musical turn – as was the case in this country until relatively recently.

Far removed from today’s sophisticated and urbane comedy acts, Brendan Grace was not one for stretching or subverting the genre of comedy, he was a tour-de-force performer with a pan-generational appeal.

A master of comedic rhythms, set-ups and timing, he had an enviably high laugh-per-minute ratio and although his material was written and performed in a distinctly Dublin idiom, he did manage to become a successful touring comic in the US.

Born in the Liberties, Dublin in 1951, he left school at 13. His first foray into show business was with the folk band The Gingermen, but one evening when his bandmates failed to arrive for a gig, he just did the show solo. His comedic monologues about life growing up in the Liberties worked so well that evening that he decided to become a full-time comedian.

Entertainment in Ireland in the 1960s was ruled by the showbands, and Grace honed his craft as the opening act for many of these well-known bands. His plan was to build up to a two-hour set that would see him becoming the headliner rather than the hurried support act that had to perform while people were still making their way to the venue.

He put together a show that relied heavily on comedy characterisation. His best known creation, Bottler – an irreverent, slightly risqué young working-class Dubliner (which he says he modelled on himself) – was an immediate hit with audiences.

This was comedy that was far removed from what anyone else was doing at the time. While other comics sounded like they were reading from a tired old joke book that had been passed down from one generation to another, Grace had original material that was heavily dependent on his superb delivery skills.

He had similar success with his other much-loved character – that of a drunken father-of-the-bride stumbling his way through a wedding speech. The material may not have been cutting-edge (at least, by today’s standards) but it was his performance of it that elevated his act.

He was a pioneer in that he accustomed Irish audiences to the idea of a comedian who wrote and performed his own material as a headlining act. Not that his ascent was easy in the Ireland of the 1970s – his appeal was mainly spread by word of mouth, and his status as a celebrity comedian was hard-won in the unforgiving Irish showbusiness scene.

He was always advised to bring his act abroad and play to international audiences and he got the biggest break of his career in 1989 when Frank Sinatra, Sammy Davis Jr and Liza Minnelli came to do a show at Dublin’s Lansdowne Road (now The Aviva).

At the after-show party, Grace was given the onerous task of entertaining the three famous stars and their travelling entourage. From all accounts he gave the gig of his life that night, and Sinatra in particular was so impressed with Grace’s drunken father-of-the-bride routine that he personally convinced the comedian to travel to the US, where the singer would use his contacts to arrange shows for him.

Grace moved to Florida and had a secondary career entertaining US audiences, while still travelling back to Ireland to tour on an annual basis. It was important to him that his material – although rooted in a very Irish experience – could work with overseas audiences.

An appearance in the TV sitcom Father Ted – in which Grace played the sinister priest, Father Fintan Stack – was widely acclaimed and showed off his ability to create an instantly memorable character.

Grace did find it odd though that after over 30 years of hard slog on the Irish entertainment scene building up his own name, he would be stopped in the street by people recognising him only as Father Fintan Stack and asking him to recite his lines from that show.

As the tributes pour in to a much-loved star, it’s important to remember the pioneering aspect of Grace’s work. He single-handedly established the idea of a local comedian who wrote and performed his own original material as a valid and necessary part of Irish showbusiness life.

Because his routine were so character-based, his work and the skill that went into it can still be appreciated today – even if comedic tastes have significantly moved on from when he was at the peak of his powers.

Although he would not be a direct influence on any of today’s comedic stars, the manner in which he fashioned his material out of his own life and experiences and found his own distinctive voice is a lesson to anyone in the comedy world.

Outdoors is the future of live performance, and it’s time to get it right
9