Funeral to take place in the Liberties in Dublin on Monday 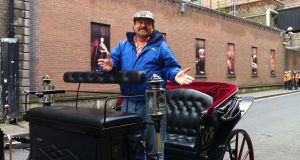 Brendan Grace worked in the entertainment industry for 50 years.

Tributes have been paid to the comedian, entertainer and musician Brendan Grace, who has died aged 68.

Grace, a native of Dublin’s Liberties, died in hospital overnight. He had been undergoing treatment for pneumonia for the last month, and it had transpired that he was also suffering from lung cancer.

“He had heart enough both for his family and a nation and we’re just so proud of that. We were happy to share him,” she told RTÉ’s Liveline.

“Offstage, although he absolutely made us laugh often, he was a different person and I loved that we got that person. Everyone else got the entertainer, we got a more vulnerable version of that,” she said.

“It was the comfort my mam gave him that made his passing so gentle.

“He promised that he would never leave us and we believe that to be true.”

Grace has had a number of health issues in recent years and suffered a stroke and complications from diabetes. He lived in Florida in the US and regularly returned to Ireland to tour but was forced to cancel his Irish tour this summer due to ill health.

He is survived by his wife of 46 years, Eileen, and three other children Amanda, Bradley and Brendan Patrick.

His funeral mass will take place on Monday at 1 pm in The Church of St. Nicholas of Myra, Francis Street, The Liberties, followed by Private Cremation for family and friends in Newlands Cross Crematorium.

A book of condolences was opened on Thursday afternoon at the Mansion House, Dublin and will remain open until 5pm on Friday.

President Michael D Higgins was among those paying tribute, saying: “Brendan’s spontaneous wit and his sense of timing, his obvious delight in interaction with his audiences, meant that Brendan’s sense of humour was drawing from, and itself a profound contribution to, the deep wellspring of Irish wit.”

The President extended his condolences to Grace’s wife, Eileen, his four children and his wider family and friends.

Taoiseach Leo Varadkar paid tribute on Twitter, writing: “RIP Brendan Grace, an Irish comedy legend. You made us laugh so many times, from Bottler to Father Ted and so many others. One of the greats. Our thoughts are with Brendan’s friends and family.”

Comedian and actress June Rodgers said Grace was “a wonderful family man” and a talented performer whose singing voice and comedic gifts made him “an all rounder”.

“He was so good. He always had a smile on his face, even though he wasn’t in the best of health... he would never show it, he would just get on with life,” she told RTÉ Radio.

Fellow comic Brendan O’Carroll spoke of how Grace gave him his first break in the business, warming up the audience at venues like the Noggin Inn in Dublin’s Sallynoggin. The Mrs Brown’s Boys star called him “an amazing all rounder and a very very generous man with his time, and with his advice”.

“He could stand there and do nothing and you would be just convulsed with laughter.”

McAnally said that Grace would be remembered for bringing joy and happiness all his life.

Noel McHale, a booker with MCD Productions, said he had worked with Grace since 1976, when he first booked him in Galway on behalf of entertainment figure Bill Fuller.

“He was a really funny guy, but always a decent guy. He was always checking if his crew had been fed. He was always very supportive of the local support acts, saying that the support of today were the stars of tomorrow.”

Mr McHale said Grace’s work had paved the way for high profile Irish comics who have come to international prominence such as Dara O Briain, Dylan Moran and Tommy Tiernan. “He showed that you could make a career out of being a comedian, it wasn’t a part time job. It would have encouraged other comedians.

“He was really funny, I have memories of packed rooms, people falling around laughing. He was Ireland’s first alternative comedian.”

He said that Grace’s on stage presence was undiminished by recent ill health, which had forced him to perform while seated. “He still just captivated the audience; he had them in the palm of his hand.”

RTÉ’s director general Dee Forbes said Grace had emerged as a talent “during an era when there were very few established Irish comedians”.

“Through his live shows, his live recordings, The Brendan Grace Show and many memorable guest appearances on RTÉ’s The Late Late Show, Brendan established himself in the hearts of generations of fans, not just in Ireland, but all over the world.”