Kate Bush’s live show is an arresting act of theatrical imagination and nerve – well, what else did you expect? 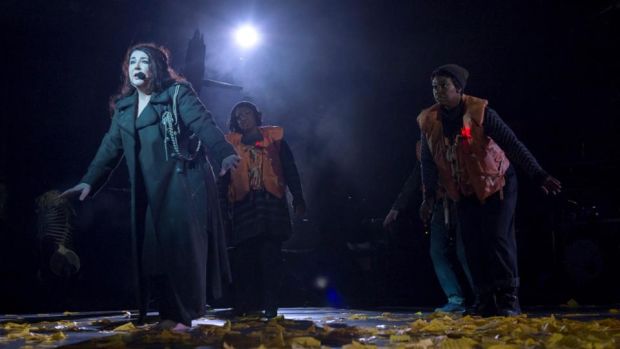 You wait 35 years for a Kate Bush gig and then 22 of them come along at once. And while we’re in the middle of it – and we really are, with surround sound, search and rescue helicopter lights sweeping the venue and confetti canons – there is an overwhelming sense that the word “gig” seems woefully inadequate to describe what’s happening at Hammersmith’s Apollo.

Aptly, the venue’s main function is as a theatre, and this show was never going to be a redivivus act of phoning in the hits. This is an auteur singer who made music videos before MTV existed and has always engaged with the visual on a physical, intellectual and aesthetic level. Bush – barefoot, smiling – leads a procession of backing singers on stage and after opener Lily offers us two of her biggest hits, Running up That Hill and The Hounds of Love. What’s immediately clear is that that the voice St Vincent recently described as “like fire coming out of her mouth” hasn’t diminished. Its warmth and depth are tonally perfect and utterly affecting, and the seven-piece band sound like there are 20 of them: secret babushkas with more versions inside the other, perhaps?

The pastoral has always loomed large in Bush’s work and the two back-to-back song cycles take us from the depths of the sea to the soaring sky. As we enter the Ninth Wave – the cluster of songs on the B-side of The Hounds of Love – a man on screen reports a sinking ship to the coastguard and the next 35 minutes are unlike anything I’ve ever seen at gig. The stage is transformed into a stricken boat, actors dressed in fish skeletons stalk the gloom, and the singer clings to gigantic buoy as “waves” and lights undulate around her.

For Watching You Without Me, her husband and son watch television in a slanting, Wonka-esque house, while Bush’s ghost looks on. Unsurprisingly, the crowd provide a miniature ovation after each song.

Tonight is about utter immersion and post-interval we dry off with the Sky of Honey sequence from 2005’s Aerial, and a brand new song, Tawny Moon, sung by Bush’s 16-year-old son Bertie.

Before the Dawn is an arresting act of theatrical imagination and nerve. Emotional, unique and engaging, Kate Bush never needed resurrection, but this exceptional woman’s work is clearly not done yet – and it will always be on her terms.

Paul Weller: ‘I’d hate to think how my health would have been if I hadn’t stopped the drink and drugs’