Women in comedy: ‘We’re not allowed to be okay... It has to be good’ 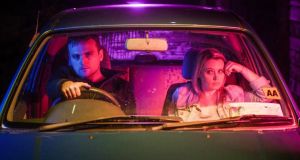 Alison Spittle’s play Starlet is set in a Toyota Starlet in Westmeath during the recession.

Each year Dublin Fringe Festival curates and facilitates a diverse comedy programme, giving some of the country’s top performers licence to run riot and play with the form. This year is no different with the strand featuring traditional stand-up shows, storytelling, theatre, and more besides from established and emerging comics alike.

Among those set to showcase their comedic wares at this year’s festival are Alison Spittle, Erin McGathy and Hannah Mamalis. All three performers are double-jobbing it at this year’s festival. Fresh from the Edinburgh Fringe, Spittle is bringing her stand-up show Mother of God to the festival as well as her new play Starlet, which marks her debut as a playwright. Meanwhile, both Mamalis and McGathy are staging their own solo shows and performing as part of the Dreamgun Film Reads ensemble.

The trio may have wildly different comedic sensibilities but one thing they do have in common is a willingness to flex different creative muscles and push the envelope. Mamalis says this is a product of being a woman in comedy.

“We feel like we constantly have to be better than the last thing we did,” she says. “Always be better and getting better because you’re not given a free pass in terms of that.”

“If you think about the debut from a female film director, it’s held to a much higher standard than so many debuts from male directors. A debut from a woman comes out and it’s up on this pedestal because it has to be. It has to be good because it’s representing so much for women. We’re not allowed to be okay or giving it a go or trying it out. It has to be really good when you put it out there. I think that pressure is there and that’s why women are constantly striving to make things better and make new things and push the boat out.”

Mamalis herself is used to experimenting with different forms of comedy and pursuing different interests, having dabbled in acting, writing, and stand-up. In fact, she recalls having a conversation with an acting teacher who admonished her for not just sticking with acting.

“I remember him asking me, ‘What do you want to do?’ and I said, ‘I really don’t know. I like acting but there are so many other paths I want to go down.’ He was like, ‘Ah no, you can’t do that. You have to stick to one thing or people won’t take you seriously.’ I was like, I think that’s bulls**t, actually.”

I love writing funny dialogue. It’s my favourite thing in the world

Structurally, the show straddles many styles and genres. There are elements of theatre, stand-up, and storytelling involved. “It’s a personal show so it’s me – I’m not doing a character,” she says. “Within it, I tell stories and imagine myself in a parallel world and I tell stories about myself that aren’t me but are me. It’s complicated.”

Asked to categorise it, she describes it as a story show. “It’s a term coined by Daniel Kitson, ” she says. “He’s a comedian so he does stand-up shows and he does story shows. They are two different things. They’re stories about other people and other worlds that he filters his own story through.”

These days, Mamalis refuses to pigeonhole herself and continues to carve her own niche. Her working motto? “Explore all the things you want to explore because you might as well if they’re in you.”

McGathy is also performing at this year’s festival. In 2015, the American embarked on what she describes as a “spirit quest”. A well-known comedic performer and podcast host, she signed up to volunteer on an organic farm with the WWOOF programme and found herself in Dundalk.

“When I got there, the farmer had Googled me and he had an old converted theatre on his property,” she says. “He asked me if I would put on a play and I ended up putting on an improvised play with some people from the town.”

She quickly felt at home in Ireland and befriended some Irish comedians. “I just felt happy here and I have quite a dark and dry sense of humour, which didn’t really fit in with Los Angeles.” She returned to the US and filed for divorce from her then-husband Dan Harmon, a television writer known for creating Community and Rick & Morty. She moved back to Dublin in January 2016 and has been living here ever since.

In that time, she has demonstrated herself to be an indispensable member of the Dublin comedy community. Last year, she co-founded MOB Theatre, a comedy theatre and school, which offers classes in improvisation and sketch writing.

At this year’s Dublin Fringe Festival, she stars in Al Dawes F**king Loves You. In the show, McGathy plays a “beta male, whimsical” comedian named Al Dawes who is going through a break-up and attempting to make sense of it in front of an audience. It’s a decidedly meta show that examines the role of the comedian as a narrator of his or her own life and experiences.

“It’s about how we, as comedians, tell the story of traumatic things that are happening in our lives and questioning what the ethics are around that and what is the value in that,” she explains.

The idea of a female comedian embodying the persona of a male comedian is transgressive and McGathy is relishing the prospect.

“As a performer, I am really excited at the idea of being a male comedian and everything that comes with,” she says. “Getting to experience walking on stage and not being seen as a woman.”

As a stand-up comedian, Spittle has established herself as one of the country’s foremost observers of life in rural Ireland. Her RTÉ2 sitcom Nowhere Fast followed a group of young people living in the midlands.

“With Nowhere Fast, I tapped into something I really like, which was the midlands,” she says. “I really loved telling those types of stories, probably because I am basing it on similar experiences that I’ve had. Also I just love writing dialogue. I love writing funny dialogue. It’s my favourite thing in the world.”

When the show wasn’t renewed for a second season, Spittle was disappointed as she knew she had more stories to tell. She sensed that theatre might be an avenue worth exploring and tweeted, “How does one go about writing a play?”

After being inundated with advice, she put pen to paper and wrote Starlet, a dark comedy set in Westmeath during the recession. The play is a two-hander set inside a Toyota Starlet and stars Roxanna Nic Liam and Peter McGann as two young people forgotten by the boom.

“It’s two people at very different stages in their lives but they’re brought together through geographic necessity,” she says. “If these people lived in a city or a town that was bigger than their village, they probably wouldn’t spend time together at all because they would have other options.”

Despite being new to the world of theatre, Spittle has so far found it to be a comfortable fit.

“Theatre is that lovely middle spot between doing stand-up and TV. You don’t have to change the way the characters speak or the references they have because the people in the theatre just have to sit and take it in. With TV, you need to think of the broader audience because you want to get it made again. With theatre, there’s not going to be another series of Starlet. This story is a complete story.”

Spittle is still a stand-up comedian, but don’t be surprised if she continues to innovate and diversify. “Doing theatre and doing Starlet has really opened my mind to what else you can do as a stand-up.”