Oireachtas committee to hear ‘economic hit will be immediate’ 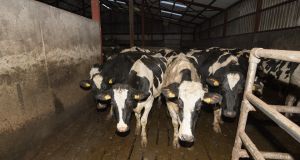 The Government and European Union must be ready with significant economic supports for the agri-food sector if a Brexit trade deal cannot be struck in the coming days, an Oireachtas committee will be told on Tuesday.

In written statements supplied to the Agriculture Committee, several representative groups for the sector warn of growing concerns about the impact of a no-deal Brexit.

Conor Mulvihill, director of Dairy Industry Ireland, has told the committee that “very significant [intervention] will be required to protect jobs and the success of the Irish dairy industry should an agreement not be reached”.

Given the uncertainty that would follow, “adequate and agile supports” should be made available in early January as the “practical consequences of Brexit become apparent. The economic hit will be immediate, so too must be the response”.

Dairy Industry Ireland and other groups will call for measures including a tariff rebate scheme, an export credit insurance scheme, investment in alternatives to the UK landbridge, and more supports to target non-EU markets.

Meat Industry Ireland director Cormac Healy said in a statement sent to the committee that there will be insufficient time for companies to get used to new trading rules. “Inevitably, this will bring chaos and disruption on a level never seen before”, unless there is a “sensible adjustment period” agreed, he will say.

The Irish Co-operative Organisation Society will tell the committee that tariffs could add costs to the agri-food sector of €1.5 billion, which it says is “an appalling vista”.

The Irish Natura and Hill Farmers Association will warn the committee that the loss of the UK landbridge needs to be offset with new cargo routes from Rosslare, Waterford or Cork. “Unfortunately this seems to have been lost on a lot of our politicians and the national media who still seem to be preoccupied with Dublin Port and how it will operate after January 1st.”