Europe is right to risk a double ‘no deal’ 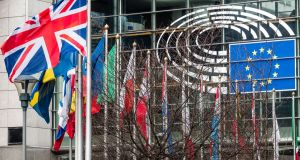 A double “no deal” would get the EU off to the worst possible start to 2021. But the consequences of two bad deals would last for decades. Photograph: Geert Vanden Wijngaert/Bloomberg

The proposed agenda for a summit of EU leaders later this week presents a picture of an orderly world. There are soothing words on Covid-19, climate change and the US presidential election. Left off the agenda are the two elephants that will be clattering around outside the conference chamber: Brexit, and a confrontation with Poland and Hungary over the rule of law.

But the reality is that, if compromises are not found soon, the EU could soon be looking at a double “no deal” – with the British, and with the Poles and Hungarians. That would mean a breakdown in trading relations with the UK from January 1st leading to the imposition of tariff barriers, long queues of lorries at the borders and possible confrontations between fishing fleets.

The consequences of no deal with Poland and Hungary would be that the EU fails to agree a budget for the first time in decades – leading to a disruption in financial flows and a stand-off with Warsaw and Budapest that could conceivably culminate in two further departures from the EU.

No sane EU leader would happily embrace these outcomes. So why are EU leaders prepared to run the risk?

The preferred narratives in London, Warsaw and Budapest are that arrogant European bureaucrats, spurred on by the French, are trying to push around the three sovereign nations.

The reality is that no one in the EU wants a double “no deal”. But European negotiators know that concluding two bad deals would be even worse for the bloc’s long-term future.

For the EU, a bad Brexit deal would involve granting the British unfettered market access, while leaving open the possibility that businesses based in the UK could undercut their European competitors by operating under laxer regulations. That is why the EU is so insistent on a “level-playing field” on regulations, as a condition for a trade deal.

The British argue that Canada was not held to similar standards as a condition for its deal with the EU. But Canada did not get completely tariff and quota-free access to the European single market. And the UK is right on the EU’s doorstep, and so potentially poses a much bigger competitive challenge.

European governments know that if they get this wrong, they could sustain long-term economic and political damage at home.

The fear of stoking domestic Euroscepticism also lies behind France’s hardline position on fishing in the Brexit negotiations. The last thing that President Emmanuel Macron needs, ahead of a presidential election in 2022, is to devastate fishing communities in a region that is already trending towards the far-right.

A bad deal with Hungary and Poland would be potentially even more drastic in its consequences. These two important EU countries have been drifting towards authoritarianism for some years. The proposal to tie future EU funding to respect for the rule of law represents perhaps the last proper opportunity for Brussels to put pressure on the Polish and Hungarian governments to change course.

If that effort fails, the EU may have to accept that its claim to be a club of law-governed democracies has lost credibility. That failure would be all the more galling, given that the Poles and Hungarians would continue to receive lavish funding from the EU budget.

Getting the Hungarian and Polish issue right is ultimately more important than Brexit. When Clement Beaune, France’s Europe minister, was interviewed on the Arte television channel last week, the first half of the interview was about Hungary and Poland; Brexit was only issue number two. But Mr Beaune made it clear that he saw a connection between the two subjects. In both cases, the EU needs an agreement – but not at the cost of sacrificing its fundamental interests.

The irony is that it is also in the interests of the populations of the UK, Hungary and Poland to get a deal – largely along the lines currently proposed by the EU.

The pursuit of unfettered sovereignty is an important principle for some British Conservatives. But the government of prime minister Boris Johnson claims that it has no intention of undercutting EU environmental or labour regulations. So it would be very odd to rupture economic relations with the EU in defence of a right that the UK will not use.

And fishing – while symbolically important – is a tiny industry. Under any conceivable deal, the UK will get a larger share of the catch. There is no British national interest involved in poisoning relations with France to secure some extra herring.

As for Poland and Hungary, the EU’s core concerns are Polish and Hungarian laws that undermine the independence of the judiciary – not imposing a “LGBTQ ideology”, as the government in Warsaw claims. Independent courts are awkward for authoritarians. But they are obviously in the interests of ordinary Poles and Hungarians, since they represent the best guarantee against corruption and arbitrary rule.

Poles and Hungarians also continue to benefit massively from membership of the EU – both in terms of funding and in the freedom to live and work across the region.

A double “no deal” – in the midst of the coronavirus pandemic – would get the EU off to the worst possible start to 2021. But the consequences of two bad deals would last for decades. – Copyright The Financial Times Limited 2020