Dublin Theatre Festival gets its history on

Whether it’s looking back or casting forward, this year’s event is rooted firmly in the now 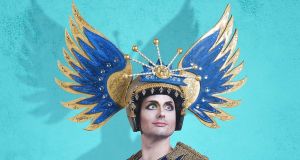 Dublin Theatre Festival: How to Win Against History

You could say the art of the theatre is to always look back in order to cast forward. Familiar plays are revived and reinterpreted to suit the tenor of the times. New work, however experimental, builds on tradition and past breakthroughs. The live moment of theatre is always a present-tense experience, but every act has one foot in the past and a step towards the future.

How to Win Against History goes the title of one of the offerings from this year’s Dublin Theatre Festival, now 62 years old, a celebrated musical about the immensely flamboyant, almost-erased Henry Paget, the fifth marquess of Anglesey. But if ephemeral art forms can’t beat history, they must join it.

That may explain a programme marked by modern revivals of hardy perennials (the festival’s coproduction with the Lyric Theatre of Playboy of the Western World), big-hitter adaptations of classic sources (Marina Carr’s Hecuba for Rough Magic) and entirely contemporary performances inspired by past masters (Dead Centre’s Beckett’s Room at the Gate Theatre; Dylan Tighe and the Abbey’s Pasolini’s Salò Redubbed; the Beckettian nods of Forced Entertainment’s Real Magic). Between where we’ve come from and where we might be heading, there is always a lot to process.

Few plays are quite as familiar to an Irish audience as JM Synge’s riotous rural drama of wildly exaggerated patricide, for instance. But its director, Oonagh Murphy, is looking for contemporary echoes in the power structures that still persist, where a young woman’s destiny is not hers to shape, and young people would rather create a reality to escape the one they’re given.

In Beckett’s Room, from the internationally acclaimed Dead Centre, reality itself seems to have become a daily absurdity in Nazi-occupied Paris. While Samuel Beckett and his partner Suzanne Déchevaux-Dumesnil undertake furtive missions for the Resistance, the horror of the war threatens to erase the face of humanity, as a wizardry of special effects scrubs the stage of actors for this master of absence. That suits Beckett, whose Waiting for Godot revolved around absences, where characters fail to materialise and clear meanings are elusive. We’re still haunted by those ghosts.

You could say the same for Anú’s extraordinary, form-pushing work, which has made the company a fixture of the festival programme. Its site-responsive piece for the Gate, Faultline, staged at 11 Parnell Square East, addresses the near “queer pogrom” of the early 1980s, when 1,500 LGBTQ+ people were outed and investigated, leading to a mass exodus from the country.

In Burgerz, a new piece by the trans artist Travis Alabanza, such intolerance persists. Inspired by a transphobic incident, in which someone threw fast food at them, Alabanza playfully explores burgers – from their make-up to air velocity – while considering how trans bodies withstand acts of violence.

If that reminds you that theatre is a fundamental act of empathy, other visiting productions ask you to put yourself in the place of others. Your Words in My Mouth, from Belgium, invites you to reconstruct a conversation about love between a panoply of Brussels residents. Collection of Lovers, from Portugal’s Raquel André, exhibits the evidence of her subversive performance of intimacy, inviting strangers to pretend to be her lover.

What does it say that other shows hasten to imagine dramatic endings? Tim Crouch’s Total Immediate Collective Imminent Terrestrial Salvation, about a guru manipulating his followers to believe in a fiction of his making, the end of the world, maps the audience contract in a sly piece of metatheatre. Other works probe at morality and resilience in extreme situations, which are now daily considerations. Some aim simply to delight and inspire. But one play, The Alternative, set in a present-day Ireland under British rule, dares to imagine another kind of now. Perhaps that too is what a theatre festival is for. dublintheatrefestival.com