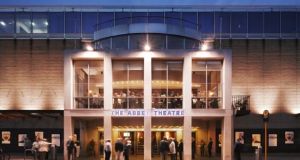 The Abbey Theatre has rowed back on its claim this week that there was an accumulated deficit of €1.4 million at the national theatre when the current directors took over in January 2017.

The theatre acknowledged to The Irish Times last night that in fact “there was no overall deficit”.

The theatre’s original statement on Monday was in response to a letter to Minister for Culture Josepha Madigan signed by 312 actors, directors, designers, agents and playwrights.

The letter expressed “deep concern and dissatisfaction” about the impact of the Abbey’s current strategy of more coproductions and fewer self-produced shows on jobs in the theatre sector since the appointment of its codirectors, Neil Murray and Graham McLaren.

In its Monday statement the Abbey said:“The financial position inherited by the current directors is also worth noting. In the two years prior to their inaugural 2017 programme, the Abbey Theatre had incurred an accumulated deficit of €1.4 million. These losses were incurred by the programming model that the signatories’ letter appears to advocate – a predominance of large-scale Abbey Theatre self-produced shows with little access for smaller independent companies and artists.”

A number of people close to the figures took issue with the suggestion of an accumulated deficit of €1.4 million. Accounts for 2016 show the Abbey had an unrestricted surplus of some €500,000 on the balance sheet.

At the time, outgoing director Fiach MacConghail was praised for bringing financial stability to the organisation.

In a reply yesterday to an Irish Times query, the Abbey acknowledged: “There was no overall deficit.

“Both of these losses were covered by reserves, and pre-approved by the Board.”

It is understood the Abbey yesterday clarified to former director Fiach MacConghail that the deficits over two years were agreed with the board and the Arts Council, and apologised for any distress caused.

Separately, the Arts Council also said yesterday it had withheld €300,000 of the Abbey Theatre’s funding for 2019, as it looked for assurances about the “quality of its employment opportunities for Irish based artists”, including paying workers Abbey rates of pay.

The Arts Council said “the Abbey is now required to evidence the range and nature of these opportunities” and €300,000 has been withheld pending confirmation the conditions were met.

The Abbey says it has “huge respect for the artists who have signed the letter, and we take its content and the concerns raised by this important group of practitioners very seriously”.

On Tuesday evening the Abbey directors wrote to signatories to the letter, saying they took their concerns very seriously and would like to discuss them in person, inviting them to send a small representative group for a round table meeting them at the Abbey Theatre.

Ms Madigan said she expected the two sides to engage with each other to find a solution and looked forward “ to a mutually satisfactory outcome”. It is understood the Minister’s office won’t become involved at this stage.

“I acknowledge the wealth of talent available among Irish theatre practitioners and the concerns they have raised, while at the same time recognising the need for The Abbey to strike a balance in terms of its programming,” the minister said in a statement issued to The Irish Times.

“I understand that The Abbey will be engaging directly on the matters raised in the letter with representatives of the signatories. I welcome that commitment to dialogue and engagement and look forward to a mutually satisfactory outcome.”

The dominance of coproduced plays has had several negative effects for theatre, the signatories to the letter to Ms Madigan said.

These include a sharp reduction in employment for Irish-based actors overall; fewer actors, directors and designers contracted directly by the Abbey on their rates, and instead paid by the coproducing company, on significantly lower rates of pay, and for shorter runs.

Brie Larson is sick of being interviewed by ‘white dudes’
7

Food or War: Alarming take on future of humanity
9