Q and A: What’s going on at the Abbey that has angered so many?

Over 300 actors and directors are dismayed by its new strategy. The Abbey has come out fighting 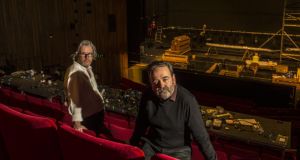 Abbey controversy: Graham McLaren and Neil Murray, its joint directors, at the theatre just before they took over, in January 2017. Photograph: Dara Mac Dónaill

What’s all the drama at the Abbey Theatre?
The proverbial manure hit the fan on Monday when a hefty letter landed on the desk of Minister for Culture Josepha Madigan – copied to the Abbey and the Arts Council – in which more than 300 actors, directors, designers, agents and playwrights expressed “deep concern and dissatisfaction” with the direction of the theatre since its new directors, Neil Murray and Graham McLaren, took over, in January 2017.

The letter claimed that the Abbey’s switch to merely coproducing a greater proportion of the plays it stages has significantly eroded their income and chances of employment. The whopping 312 people who signed the letter are a roll-call of some of Ireland’s highest-profile theatre professionals.

I’ve seen the Abbey’s posters for some of its coproduced shows, but if Irish actors and directors are involved, what’s the problem?
In many coproductions the independent producer takes the lead, which can mean significantly lower fees – up to 25 per cent less than the national theatre might pay in its own productions – for the people hired to take part. And as the Abbey is scheduling shorter runs, they say, their potential income declines even further. Acting is a precarious profession at the best of times; even some top-flight actors have needed to rely on the money from three months’ work in an in-house Abbey production, with its better rates of pay, to anchor their income for the entire year.

The Abbey counters that it still stages a significant number of its own productions and that its new approach has opened up the national theatre to a wider range of companies and artists. It also points out that, even with the increased number of coproduced and presented shows, Abbey funding is still going to theatre companies and artists.

Why is this important?
As Ireland’s national theatre the Abbey gets the lion’s share – €7 million this year – of State drama funding. In part this is to allow it to stage significant but less commercial plays. This is one of the arguments against the Abbey’s current coproduction, Come from Away, the European premiere of a Broadway musical that, along with its overseas-based cast, director and designers, is now bound for the West End of London. Critics say a try-out like this is more suited to a commercial venue; the Abbey says that it chose the play for its artistic integrity, that it didn’t impinge on the theatre’s Arts Council grant and that it should return a profit that can be invested in future shows.

Another good reason for its subsidy is that the Abbey has traditionally been a big employer. But many long-established and highly regarded actors are frustrated – and impoverished – because the national theatre is now directly employing far fewer actors despite having more shows on its stages. The same goes for directors, designers and other professionals.

Theatre is a central part of our culture, and Irish theatre punches far above its weight internationally, to worldwide acclaim. Theatre workers say the Abbey’s new strategy is further reducing the viability of a career for those who make the “product”.

The national theatre is also seen as having a role in nurturing talent of the future, such as by holding twice-yearly open auditions. Actors and casting agents are concerned that the Abbey has abolished its casting department; the jaundiced observe there is hardly a need for a casting department now the Abbey casts so few actors.

Any other effects of this strategy?
Because some shows from bigger independent companies, such as Druid and Landmark, are now copresented on the Abbey stage, Ireland’s receiving venues (as opposed, that is to say, to theatres that produce work) say fewer shows are available from companies that used to perform in them.

What else has the Abbey said?
It came out fighting. It argues that before 2017 there was a perception, real or otherwise, that its programme lacked diversity and urgency and was closed to many theatre practitioners; now, it says, other Irish companies and artists are in the theatre, and more people are buying tickets. But even for the Abbey, which has been at the centre of many controversies, the letter from the Theatre 312 is unprecedented, especially coming from freelancers who would normally be reluctant to raise their heads over the parapet for fear of jeopardising future employment. And some of its assertions – about the numbers of actors it employed, and an incoming deficit – have been challenged.

Of course there’s a conflict about numbers.
The letter says no Ireland-based actor will have been directly employed on an Abbey stage in an Abbey Theatre production for the 5½ months between the final performance of Jimmy’s Hall, on September 8th, 2018, and the opening of The Country Girls, on February 23rd this year. The Abbey responds that, within that time, 78 Irish actors will have been in employment, “either directly or with our coproducing partners”, at the Abbey and on tours – “51 actors on stage, 17 touring and 10 rehearsing for The Country Girls”. But this is comparing apples and oranges: the letter refers to actors directly employed by the Abbey; the Abbey’s response refers to a much wider category of theatre-makers.

What happens next?
The Abbey says it has “huge respect for the artists who have signed the letter, and we take its content and the concerns raised by this important group of practitioners very seriously”. It will invite the Theatre 312’s representatives to talk (although that invitation hadn’t arrived by early on Tuesday evening). The Arts Council had already put a hold on €300,000 of the Abbey’s €7 million grant for 2019, pending evidence about the quality of employment at the theatre.

Minister for Culture Josepha Madigan, the main recipient of the letter, welcomes the Abbey’s “commitment to dialogue and engagement” and says she’s looking forward to a “mutually satisfactory outcome”.

Neil Murray and Graham McLaren’s welcome opening up of the national theatre seems to have had a number of unforeseen consequences for the people who make theatre happen. Behind the scenes some furious action is undoubtedly going on to make this right.

Rise of the killer robots: The future of war
8