Abbey dispute: ‘I’m earning the same money I was 20 years ago’

Short contracts: Actors Jane Brennan and Frank McCusker on the effect of the theatre’s new strategy 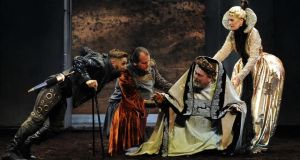 Jane Brennan is one of Ireland’s top stage actors. She has been named best actress at the Irish Times Irish Theatre Awards and won an Ifta as best supporting actress in Brooklyn. “The amount of work the Abbey is producing has shrunk and everyone is on short contracts for short runs. No one can make a living,” she said.

In many coproductions the independent producer takes the lead, which can mean significantly lower fees – up to 25 per cent less than the national theatre might pay in its own productions, said the letter from theatre professionals to the Minister for Culture this week.

Brennan says the Abbey has “traditionally been a huge employer, but it’s employing far fewer actors on Abbey rates now, despite more shows on the stage”.

We are the blood and guts, the coal face, it cannot happen without us

She performed at the Abbey in October 2018 in its coproduction with Druid theatre of Richard III, during the Dublin Theatre Festival.

“I was paid the Druid salary. Druid’s top salary is €850 a week and the Abbey’s is €950. This is despite the Abbey’s name on the poster. I’m working for the same money in the Abbey as I was getting 20 years ago.

“Actors feel they’re being shoved to the bottom of the food chain again. The Abbey’s success is at our expense. They have managed with this model to reduce our already poor remuneration to pre-millennium levels.

“Theatre actors, designers, directors – we relied on the Abbey salary if we were cast. It can’t be right to have our highest subsidised theatre in coproduction with another subsidised company, paying us the lower company’s rate on the national stages.”

Another actor, Frank McCusker, who has performed regularly at the Abbey over 30 years, says lower rates and shorter runs have impacted on his income and mean it’s difficult to “make a living (or scrape one) in what has ever been an insecure profession”.

He recently finished in the Landmark/Everyman/Abbey coproduction of an adaptation of Louise O’Neill’s Asking For It. He did eight (rather than the usual seven) shows a week for the sold-out show in the Abbey, for rates offered by the coproducer rather than the higher Abbey rates.

The contract was for nine weeks rather than the usual Abbey contract of about three months.

“Having worked regularly since 1988 at our national theatre, I feel conditions are getting dangerously worse rather than better for those who deliver ‘the product’. We, and stage management, offer the work nightly, we are the blood and guts, the coal face, it cannot happen without us.”

Once, being cast in an Abbey show was “the raft, the anchor for a year’s employment. Now there are fewer jobs, shorter runs, at lower rates. There is less work for actors, which is untenable as a model for the people who are central to serving it.

“It’s unsustainable. I don’t know if I can do this any more.”

Dolph Lundgren: Grace Jones would bring as many as five girls back... ‘Exhausting’
6

Emma Swift: Blonde on the Tracks review – Dylan with a twist
Real news has value SUBSCRIBE