Unthinkable: Philosopher Patrick Masterson believes there is a ‘rational order’ to the universe whether or not God exists 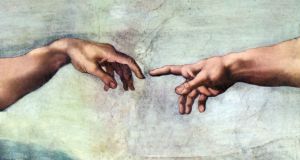 Michelangelo’s Creation of Adam in the Sistine Chapel in Vatican City, Rome. ‘It is reasonable to hope in a particular rational ordering of things,’ says philosopher Patrick Masterson. Photograph: Getty Images/Science Photo Library

Possibly the single biggest trend in philosophy in the past 50 years has been the decline of metaphysics. “Meta-what?” you say (proving the point).

Metaphysics: The quasi-religious study of the ultimate reality, a venturing beyond science, or what the British thinker FH Bradley called “the finding of bad reasons for what we believe upon instinct”. It’s hard to fathom but University College Dublin used to have an entire department devoted to the subject, alongside departments of logic and politics, “but metaphysics was the centrepiece of the thing,” former UCD president Paddy Masterson fondly recalls.

Now carrying the title of emeritus professor of philosophy of religion, Masterson has devoted his academic career to solving the God question. While his oeuvre defies pithy summary, he has kept returning to two concepts in copious works.

First, asymmetry: The idea that our lives are full of asymmetrical relationships. (For example, we depend on scientific knowledge; it does not depend on us.) Masterson asks whether this dynamic could also apply to the transcendent whereby “I depend radically upon God but he does not depend upon me”.

Second, emergence: Where do things such as love and hope ultimately come from? Masterson has gone through cycles of thought over the years but a defining moment came in 2013 when his wife of 50 years died.

“I had a really wonderful, beautiful wife, Frankie,” he explains, inviting Unthinkable into his home for a chat over coffee. “She is in a box in my study there. But I think there is more to her than that bag of ashes.

“I think that beauty, truth, goodness, good humour, that all of that isn’t reducible without residue to a bag of ashes. It obtains somehow. How that is I have no idea but I believe . . . because of what is and ought to be the case somehow.”

Where once Masterson was occupied with the ancient task of proving God’s existence from first principles, he now starts with what he knows to be true – earthly love – and “works back” from there.

“It would be hard to make any sense of this except in terms of a loving God who is the creative source of all emergence, including her emergence from death and my love of her as still alive.”

Now 84, Masterson still has an infectious enthusiasm for inquiry and is working on yet another book. In honour of his life’s searching, Irish Academic Press has published a collection of essays, Ciphers of Transcendence edited by Fran O’Rourke and featuring Richard Kearney, Philip Pettit and Alasdair MacIntyre, among others, as well as contributions from the late archbishop Desmond Connell and Seamus Heaney whose paths crossed Masterson’s in bygone years.

An essay from the man himself is included, in which he defends metaphysics “as an activity which is not an illusion but one which sheds light on the great question of the ultimate meaning and value of human existence”.

Why has metaphysics fallen out fashion?

Patrick Masterson: “The general metaphysical approach to things got a terrible belt in two directions, one the development of modern science, and the other is the Cartesian thing, both in the 17th century.

“These came with a bang. It said forget about all this speculative stuff about gods; let’s understand the world from within. Then you got Descartes saying I’m going to doubt everything I can – the world, my body but the one thing I can’t doubt is ‘cogito ergo sum, I think therefore I am’. Therefore, I will only accept what I can perceive clearly and distinctly.

“That begins the game of not knowing things as they are in themselves but as they appear to us. That raises a problem because we only know God as he appears to us.”

Part of the problem with metaphysics is how to measure progress in the discipline. What achievement can you point to?

“I suppose the last really great hope would have been Hegel. One of the central problems of metaphysics is . . . If there were a God how do you understand the relationship between God and human beings?

“Hegel answered it by saying human beings are the mechanism by which the God gets to know himself. The question of co-existence becomes a central idea.”

What are you certain of?

“My thinking has evolved but I would have, and do not abandon, my belief. I can make a case that what I call the analogy of being – the different levels of being and truth and goodness – must be ultimately explained in terms of a spiritual reality rather than pure chance occurrences.

“I’ll put it this way, the second law of thermodynamics involves the idea of entropy, the idea that ultimately disorder is increasing and ultimately, in a few million years, there is going to be just utter chaos and disorder and all the great things we have been devising, all meaning and value, will have been wiped out. It seems to me you have to use science to make that conclusion.

“I think therefore the concept of negative entropy [is possible] where order is being built up rather than breaking down. And I think I can argue, yes, order has a more ultimate reality.

“Maybe it’s because I am convinced – and this is more a conviction than a proof – that how things are and how they ought to be coincide.

Could this be related to wishing for life after death?

“Yes, I’m wondering does that have an affect on me. It would be impossible to say it didn’t, which doesn’t mean that I don’t have moments when I wonder is it all caboodle.

“Sometimes in that case I say, well even if the whole theological interpretation of it was mistaken, Christ was a pretty good guy and if I could live a life in accordance with what he lived, even if he was only a human being, it wouldn’t be a bad way of living.”

How often should you update your social media profile?

Anselm of Canterbury replies: “It is better to exist in reality than as a concept.”

The Comey Rule review: You actually begin to root for Trump
9