Declan Buckley, the man behind Shirley Temple Bar, on the paintings of Gabhann Dunne, Emma Dabiri’s Don’t Touch My Hair and why Madonna’s new album is worth repeated listens. 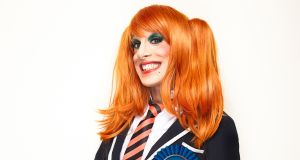 I’ve just finished Don’t Touch My Hair by Emma Dabiri. It has a different resonance to a drag queen: it’s about being an Irish person growing up in a society she doesn’t fit into, so that alone is interesting, and on a superficial level, there’s the same issue about wanting people to get away from our hair. But it’s much deeper than I expected. She uses black hair as a prism to look at beauty, Irish politics and how people of colour are treated in Ireland, the UK and America – countries we consider to be similar.

It was an incredible read, and it left me furious and educated at the same time. It also made me feel guilty because I’m part of the culture she discusses: while I didn’t have some of the privileges she refers to, I had other ones. It’s important we open our eyes to other peoples’ perspective of us.

Myself and my friends tend to congregate in a small restaurant called Romano on Capel Street. It’s very cheap and cheerful. It’s nothing to look at but the staff are so friendly. We’ve been going there for years. It’s a basic Italian, so I’d usually have a pizza or pasta.

Comedy has been killed by the farce of politics at the moment, but I have to mention my good mate Deirdre O’Kane, who’s touring her show at the moment. She’s gas craic.

The last thing I remember seeing was The Country Girls in the Abbey Theatre, an adaptation of Edna O’Brien’s first book. Edna O’Brien came on the stage at the end, which turned the production into a ‘returning prophet’ kind of thing. She was talking about feminism and being a sex-positive icon in a world of religious thinking and narrow-mindedness, so to see her tell her story was brilliant. She’s a force a nature, that woman.

My husband works in the area, so it means we’ve been gathering some great stuff in our house over the years. We have a few pieces by Gabhann Dunne, a painter who blurs the line between figurative and abstract – so you know what you’re looking at, but it’s presented in a different way.

I’ll go cliché gay and say Madonna’s latest album, Madame X. When I first heard her new music, I was horrified, but it’s grown on me. She’s gone for an international sound, probably because she’s living in Portugal at the moment and she’s using its international flavour. There are sounds from Africa and South America, as well as European-style dance music. It’s a lot more playful than if she had to throw out chart-toppers. She doesn’t cares about being a chart-topper anymore, but it still managed to get to number one in the States.

Florence in Italy is probably my favourite city in the world because it has everything: culture, food, art, wine, history, and it’s small enough that you don’t feel overwhelmed. I’m going to Palermo in Sicily next week and hoping that’s also the case there. I’m reading up on it and I’m excited, but also terrified because everyone keeps talking about the mafia. I can deal with the drag queen mafia, but I’m not sure about the actual mafia.

I’m watching The Same Sky on Netflix. It’s in German, and set in divided Berlin when the wall was still up. It’s about how the people deal with their situation. There’s lots of different storylines, like the Stasi guy who’s sent over to West German side to spy, and women who are being indoctrinated into the East German Olympics Team – they’re taking the medications and getting hairs where they shouldn’t be. It’s fun, but also an interesting look at what life was like there at the time.