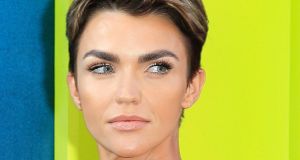 Ruby Rose: “Where on earth did ‘Ruby is not a lesbian therefore she can’t be Batwoman’ come from? Has to be the funniest, most ridiculous thing I’ve ever read.” Photograph: Nina Prommer/EPA

Actor Ruby Rose has deleted her Twitter account after receiving abuse following the announcement she will play the first openly gay superhero lead role in an upcoming TV series.

Earlier in August it was revealed that Australian star Rose (32) had been cast as Batwoman.

The character has been described as a highly trained street fighter with a passion for social justice.

The Orange Is The New Black star claimed she had been sent negative tweets about her own sexuality since the announcement.

In a final series of tweets quoted in various media outlets, Rose posted before deleting her account: “Where on earth did ‘Ruby is not a lesbian therefore she can’t be Batwoman’ come from? Has to be the funniest, most ridiculous thing I’ve ever read.

“I came out at 12? And have for the past five years had to deal with ‘she’s too gay’. How do y’all flip it like that? I didn’t change. I wish we would all support each other and our journeys.

“When women and when minorities join forces we are unstoppable. When we tear each other down it’s much more hurtful than from any group.

“But hey, love a challenge. I just wish women and the LGBT community supported each other more.

“My wish was we were all a little kinder and more supportive of each other.

“Sending everyone my love and gratitude, it’s been a rollercoaster of a year, this month especially.

“I am looking forward to getting more than four hours of sleep and to break from Twitter to focus all my energy on my next two projects. If you need me, I’ll be on my Bat Phone.”

The star’s Instagram profile remains up but the settings have been changed so only people she knows can comment on her posts.

Rose previously told US talk show host Jimmy Kimmel that she was “thrilled” to be playing Batwoman and that she used to make bat wings and jump off “high places” as a child.

The tearful star added: “I feel like the reason I kept getting so emotional is because when I was growing up watching TV, I never saw someone I could identify with, let alone a superhero.”

Rose will be introduced as Batwoman in a December crossover event between The CW Network’s other DC Comics shows Arrow, The Flash and Supergirl.

A standalone series about Batwoman is in development for the 2019-20 TV season.

Rose representatives have been contacted by the Press Association for comment.–PA