Richard Attenborough’s son will visit Skibbereen for ‘Oh! What a Lovely War’ screening 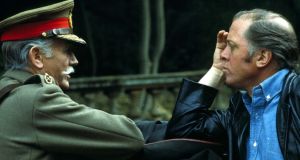 This weekend, the West Cork History Festival will be hosting one of the more underrated emanations of the turbulent 1960s. Oh! What a Lovely War began as a theatre piece at Joan Littlewood’s legendary Theatre Workshop in Stratford, East London.

First staged in 1963, the show used the songs of the first World War – some patriotic, some bitterly satirical – to revisit the waste and barbarity of that conflict. The audience sang along uneasily to Good-bye-ee! and The Bells Of Hell Go Ting-a-ling-a-ling while a scoreboard listed loss of life and yards gained.

It’s hard to imagine a more defiantly theatrical piece of work, but, in 1969, Richard Attenborough made a film of Oh! What a Lovely War. Featuring a dizzying array of British stars – John Mills, John Gielgud, Laurence Olivier, everyone else – the picture follows an ordinary family as they move from enthusiasm to bereaved despair.

Glancing at the picture as it approaches its half-century, one is reminded that handsomely budgeted pictures really were allowed to be quite odd in those years. The closing scene, in which a soldier follows a red ribbon past squabbling generals, towards a vision of peace and then emblems of slaughter, suggests nothing so much as the contemporaneous 2001: A Space Odyssey. Both films excited as many as they puzzled.

The piece is endlessly sympathetic to the soldiers on either side. It stands not just as an anti-war film, but also as a genuine pacifist text

Michael Attenborough, the late Lord Attenborough’s son and a distinguished theatre director in his own right, will be in Skibbereen to discuss a screening of this peculiar, troubling work. By the time of its release, his dad had been acting for close to 40 years and producing for close to 10. How on earth did this ambitious project become his first film as director?

“He had already agreed to direct a film about Gandhi,” Michael says, alluding to an Oscar-winning behemoth that would not arrive for another 13 years. “The search for money for Gandhi was already well under way. It landed in his lap because one of his best mates, John Mills, was asked to direct it and he said: ‘I know Dickie is looking to direct something.’ He lived near us and he literally walked it down and said: ‘You should have a look at this.’”

Michael Attenborough, who met his first wife, the actor Jane Seymour, on the set, was an inquisitive 18-year-old when the film was being shot. He remembers that information was still trickling through about the atrocities on the Western Front half a century earlier. Meanwhile, his contemporaries – Oh! What a Lovely War’s Vanessa Redgrave among them – were outside the US embassy protesting the Vietnam War. The film was timely in many ways.

“Look at the dates,” Attenborough says. “One of the highest points of protest against the Vietnam War was in the late 1960s and Oh! What a Lovely War was made in 1968. You couldn’t have missed that title.”

The piece was also timely in that the theatrical and cinematic releases emerged either side of the war’s 50th anniversary. The screening in west Cork comes as we prepare for the 100th anniversary of the armistice. Maybe, we are more obsessed with anniversaries now, but Michael is confident that wasn’t a driving impetus.

It was a thrilling time for British popular culture and, inevitably, all sorts of legends have grown up around the film’s shooting

The most significant difference between the two anniversaries hangs around the presence of living veterans in 1968 and their absence now. Oh! What a Lovely War is an awkward project. The piece is endlessly sympathetic to the soldiers on either side. It stands not just as an anti-war film, but also as a genuine pacifist text. Yet the tone is so deeply ironical – jolly songs accompanying atrocities – that it surely risked causing offence to the many surviving veterans.

“I only had this second-hand,” Michael says. “But Dad tells me that a lot of them were very moved by it and appreciated that no attempt had been made to convey the full, bloody horror of it. I don’t think they wanted to go there. ‘Don’t try and recreate my pain.’ I think also there was a shared feeling among most of them that they weren’t sure why they were there. They didn’t understand why the slaughter was necessary.”

It was a thrilling time for British popular culture and, inevitably, all sorts of legends have grown up around the film’s shooting. The polymathic Len Deighton – spy novelist, cookery writer, cartoonist – had bought the film rights from Littlewood, but, though apparently a producer on the project, he took his name off the opening credits.

Speaking to The Independent in 2006, Deighton described the decision as “stupid and infantile”. The explanation asked more questions than it answered. It seems he objected to certain other people taking credit they didn’t deserve. “I thought these people should be ashamed of claiming things they hadn’t done,” he said. “So I thought I would shame them by taking my name off. It doesn’t matter. The film got made.”

Deighton also told the interviewer that, at the suggestion of philosopher Bertrand Russell, he met Paul McCartney to discuss the possibility of The Beatles appearing in Oh! What a Lovely War. Bertrand Russell? Len Deighton? The Beatles? You just don’t get those sorts of interactions any more.

“I have no reason to believe that’s not true,” Michael says. “But I am certain that if it reached my dad’s ears he’d have gone: ‘That’s just not a clever idea.’”

At any rate, the picture became a hit in the UK and launched Richard Attenborough on a road that led eventually to an Oscar for Gandhi and, in 1992, a place in the House of Lords. Michael became one of the busiest theatre directors of his generation. In 1986, he returned to the first World War when he directed the first British production of Frank McGuinness’s Observe the Sons of Ulster Marching Towards the Somme.

He remembers: “My first job was to research the nature of that Protestant contribution to the first World War and the scale of slaughter among the Ulster regiments. I went to Ireland and talked to lots of people. It was a real lesson.”

Michael, artistic director of the Almeida Theatre between 2002 and 2013, remembers his dad being uneasy about looking back at his work. He wouldn’t even watch Gandhi. But Michael reckons Lord Attenborough was largely happy with Oh! What a Lovely War. He might have “speeded it up” a bit. But he had no great regrets.

“I remember so clearly, he just loved doing it,” he says. “I think he looked back and thought: ‘Blimey, that’s not a bad debut.”

Oh! What a Lovely War screens as part of the West Cork History Festival at 7.30pm on Friday, August 17th

Milkman by Anna Burns: putting Ardoyne on the literary map
2

Domhnall Gleeson, locked down in Dublin: ‘Oh s**t, this is embarrassing’
6