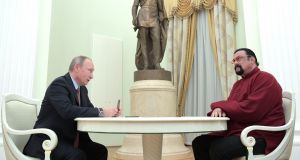 Steven Seagal has just been appointed by Vladimir Putin as special representative for Russian-US humanitarian ties, which means, either I’m having some sort of neurological episode, or, alternatively, that that’s just life now in the 21st century. Walks to window. Looks out at the hellscape. It’s the second one, I think.

Steven Seagal is exactly the kind of former film star and alleged sexual harasser that does very well in politics these days and would, of course, worship a humourless shirt-phobic circus strongman like Vlad. He also now looks like a baddie in one of his own films, with jet black completely natural hair, a mirror universe goatee glued to his scowly face and the kind of dark glasses and Mao-suits traditionally worn by purveyors of alternative medicine, Bitcoin and counterfeit denim.

Up until recently I did not know that Seagal has been accused of sexual assault and was an apologist for a KGB-trained autocrat. In more innocent times, before I knew these things, my friend Claire suggested that we have a Steven Seagal day during which we celebrated Seagal’s oeuvre by watching three of his films before sitting around a piano and drunkenly singing about his doings. It seemed like a good idea at the time. Obama was still president. The Good Friday Agreement was still relevant. Zayn was still with One Direction. It felt like history had a trajectory and a logic to it.

We watched early Seagal (Marked for Death), peak Seagal (Under Siege 2 – an unusual title for a film until someone explains that it’s a sequel) and late-period Seagal which is basically anything after 2001 in which the actor doesn’t feel like moving too much. This was represented by 2004’s Out of Reach.

In Marked for Death, a number of superstitious Jamaican gangsters led by a stereotype named Screwface decide to take over the American drug trade. Only one orientalising, greasy haired, violence-acrobat can stop them. Guess who it is? That’s right. It’s Steven, looking like a pile of melted cheese with a pony tail and a pout.

In order to downplay the fact that this film is basically a montage of Steven Seagal killing Jamaicans, at one point even travelling to Jamaica to do so, Seagal is given not one, but two black friends. Their names are “Friend of Steven” and “Steven is not a Racist”. Well they might as well be, for all the nuance that goes into the writing. Watching this film you experience the gamut of emotions from “This film is racist” with a question mark at the end to “This film is racist” with two exclamation marks. Apart from this, however, it helped us identify a few things about Steven the man.

1) He’s not the most expressive actor. When the baddies shoot up his lovely suburban house, he has a sour puss on him that’s like, “Tsk! I am so annoyed with these Jamaican drug dealers right now!”

2) In his early films he likes to wear short bolero-style jackets like your sister wore for her confirmation.

3) He has tiny little eyes. They’re like raisins on a big moist plate. What do those raisins see? The official state broadcasts of the Russian government, apparently.

4) He has a really strange way of running that involves tiny rapid footsteps and gently flailing arms. Over the course of his long career no director has dared to raise this with him.

I mean, how would they do so? “Steven, I can’t help noticing that you run as though you are a particularly expressive toddler auditioning for Cats. I don’t mean to pry into your process but is your intention to look like… a prize fool?”

Because that conversation would end with Steven stabbing the director through the head with a samurai sword and then slowly walking, not running, in the direction of his attorney (“I’ve got something a little different for you today, Dave”). Of course, Steven rarely runs these days, preferring to be sucked around the Kremlin by vacuum tube.

Under Siege 2 is, most definitely, one of Steven Seagal’s most successful films. In it Seagal plays a former Navy Seal who now just wants to forget all of the killing he did by being a chef on various modes of transport. In Under Siege he was a chef on a boat. In Under Siege 2 he’s a chef on a train which also happens to be carrying the daughter of his dead brother (Jonathan Livingston Seagal) from whom he has been estranged.

Unfortunately, he can’t make a pie without being besieged by terrorists. “No not terrorists again! I’m trying to make a pie!” he cries as he kills a few terrorists.

The terrorists are the Hollywood type of terrorist who are so sweetly international in their makeup that it feels like they might actually be doing an Erasmus year. Furthermore, like most Erasmus students, they don’t have coherent politics. In this instance they are going to use the speeding train and “science” to blow up the eastern seaboard of America, the best country by all accounts, and which thus makes foreigners jealous (Seagal has changed his mind about what’s the best country since then).

Well, they have picked the wrong train and before long they are all dead due to serious head wounds and horrific burns and brutal lacerations and Steven has bonded with his niece who doesn’t seem bothered in the slightest by all the death because she is a teenage American. Yes, Under Siege 2 is a docudrama about being a teenager in America and the director is Mike Leigh.

The last film we watched was Out of Reach and at this stage I was a little too Seagal-drunk to follow the plot properly (I have also definitely got previous plot details wrong). We had at this point written several verses of a song about Steven’s “running”, his “jackets” and his “big face” but, due to our ignorance, failed to write verses about his sucking up to autocracy or his treatment of women.

But the gist is this: Steven now lives in the Alaskan forest where he heals sick animals and writes to his pen-pal, a 13-year-old Polish orphan girl – you know, totally normal behaviour for a middle-aged man. When the letters stop suddenly, he does the logical thing – he goes to Poland and starts killing people with a sword.

Late period Seagal has replaced the short little jackets for smock-like overcoats. He already seems quite tired as though distracted by geopolitics and potential law suits. The fight scenes involve lots of close-ups of Seagal’s big face followed by acrobatic shenanigans from someone else with working joints. I’m fairly certain they even use a stunt double for a scene in which his character must climb stairs, largely because his limbs aren’t flailing about like two extravagant flamingo necks as he runs.

But that’s just Steven’s old job. Now he’s a special envoy for the Russians. Putin presumably enjoyed these documentaries about life in America and thought their allegedly predatory creator would best represent his feelings towards his western neighbours – one of malevolent contempt. So I’m fascinated to hear more about Steven’s new role. I wish him and all other possible envoys – Conor McGregor, Dennis Rodman, Scrooge McDuck, Jar Jar Binks, Marshall from Paw Patrol – all the worst.

A blow-by-blow guide to the Easter Rising
5

YA fiction: Children of Lir’s Aífe tells her side of the story
10