The big film about the Big Fella: Michael Collins review (1996)

From the archive: ‘The most important film made in or about Ireland in the first century of film’ 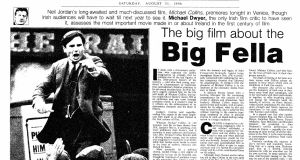 Among the items in the collection are personal correspondence, drafts of film scripts, story boards , production files, notes and photographs.

Below, we take a look back at the review of Jordan’s 1996 film Michael Collins. The piece was written by Michael Dwyer and first appeared in the paper on Saturday, August 31st, 1996.

It deals with a charismatic politician who captured the public imagination so strongly that he remains one of the key figures in the 20th century history of his country - and who died young, murdered in circumstances so suspicious that contradictory theories continue to be advanced decades later. So Neil Jordan’s eagerly awaited film on the life and death of Michael Collins inevitably recalls Oliver Stone’s recent JFK as an ambitious and epic trawl through turbulent events in a country’s past as it reflects on the achievements of its eponymous character and his place in history.

Jordan’s riveting and superbly crafted film stands as the most important film made in or about Ireland in the first century of film.

Whereas Michael Collins, at 140 minutes, runs for an hour shorter than JFK, Jordan’s film is, if anything, even more ambitious than Stone’s, and it certainly is more coherent and focused. Like JFK, Michael Collins bristles with a driving kinetic energy, but its robust and imaginative visual style is so formidable that Jordan never needs to resort to the kind of stylistic intricacy employed by Stone.

Most unusually for a political drama, Jordan brings a rare degree of objectivity to bear on his heartfelt and thoughtful treatment of complex issues in this admirable film. There is such a wealth of detail and incident to absorb and digest on seeing Michael Collins for the first time that, in an era of so manly grossly over extended movies, here is one which might profitably have been allowed to run longer.

Even before it went into production in Dublin last summer, Jordan’s film was generating a level of controversy in this part of the world to match the battle of words that followed the release of Stone’s film in the US. However, while the memory and legacy of John Fitzgerald Kennedy looms large throughout Stone’s film, JFK is principally concerned with exploring the various conspiracy theories that followed his assassination. In Jordan’s film the character of Michael Collins is to the forefront of the cinematic drama from start to finish.

A salutary history lesson with a burning relevance for the continuing consequences for this country of the events it depicts and dramatises, Neil Jordan’s Michael Collins makes his points firmly and lucidly, with an admiration for its subject, what he did and what he tried to do, and it achieves this without resorting to the emotive trappings employed so often in political cinema to work up blood boiling indignation in a target audience.

Collins is depicted as a determined pragmatist who is not without self doubt, a man with a capacity for violence and the ability to see when it had to stop and when political means and negotiation would be the only way forward. Jordan’s most adventurous and most accomplished film to date, Michael Collins is epic in scope and scale and it is fuelled by a dynamic energy and by a firm, cool headed focus on its subject.

Although Liam Neeson seems rather too old to play Collins in the very early scenes of the film, he is physically every inch The Big Fella and he settles into the part with supreme ease and flair, delivering his finest and most complete screen performance to date.

In the difficult role of Kitty Kiernan, the only woman in the film with more than a couple of lines to speak, Julia Roberts plays the role with charm and grace, persuasively establishing the dilemma of a woman who was romantically involved with Harry Boland before falling in love with his best friend Michael Collins and who fears for the lives of both men in their dangerous pursuits.

The depth of feeling in her later intimate scenes with Collins echoes the passion in their letters which went on exhibition in Cork this month.

Her character also serves to flesh out the humanity of both men in their hours away from their campaigns, and in her interludes with them individually or together, to offer breathing spaces and pauses for reflection amid the tumults of activity. As Harry Boland, Aidan Quinn underplays the role with a quiet strength and firmly captures the transitions in his close relationships with Kiernan and Collins.

In a superb cast that also notably features Stephen Rea, Ian Hart, Charles Dance, Jonathan Rhys Myers, Gerard McSorley, Sean McGinley and Brendan Gleeson, the revelation is Alan Rickman’s terrific performance as Eamon de Valera - arguably the most daunting of roles in that, of all the characters in the film, it is the most familiar to contemporary audiences from radio and television.

Precisely catching the nuances in Dev’s delivery and uncannily resembling him as a young man, Rickman plays him as a shrewd, cunning manoeuvrer with an ever alert eye for his own survival. In some quarters, the most controversial casting in the film may be one of the smallest roles the American ambassador to Ireland, Jean Kennedy Smith, makes a brief cameo appearance as a woman who directs Collins to an exit when he is on the run.

Among the many awards it may reap, Jordan’s film should earn a third Oscar for its gifted lighting cameraman, Chris Menges, who lit Jordan’s first film, Angel, and went on to win Oscars for The Killing Fields and The Mission.