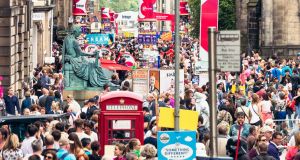 Crowds at the Edinburgh International Festival in 2015. Photograph: Getty Images

In September 2020, Deutsche Bank strategist Jim Reid stated that we are likely waving goodbye to the era of globalisation and entering into an “Age of Disorder”. A report on markets in this paper two weeks later observed growth in the digital sector, across environmentally sustainable initiatives, and a focus on “returning production closer to home”.

The cultural sector is not immune to these market forces and is similarly undergoing a necessary shift in response to the pandemic. The upending of “business as usual” brings into focus the way we have been making, delivering and valuing work in the arts. Globalisation saw training, touring and collaborating across borders become the norm rather than the exception: we were all international. With that came a value system which prized the international above the local. But if we are entering into an Age of Disorder, is it time to re-evaluate concepts of internationalism and provincialism in the arts?

The same month as Reid’s prediction, Galway International Arts Festival posted a promotional video featuring the work of visual artist Jennifer Cunningham. The voice-over of artistic director Paul Fahy stated: “She’s from Galway, based in Galway but her work is of an amazing international standard.” The seemingly innocuous statement was quickly picked up by local artists who drew attention to the “but”. Their assertion was that the conjunction implied a contradiction, a linking of ideas in contrast to one another, in this case “local” and “international”.

In the arts, the term “international standard” can mean different things: artists whose work has international resonance; who have international training; who are exploring current global artistic trends; whose work has been seen internationally; or as shorthand for “better than the usual local fare”. In most cases “international” points to ambition, reach and excellence, but when used to describe a level of artistry, we distinguish it from its place of origin and an element of cultural cringe is implicit.

Cultural cringe is not the purview of the local artist alone. Common among post-colonial societies, the idea that we cannot define the value of our work until it is appraised by a society or marketplace other than our own is, however, deeply problematic for a local artist.

As Terry Smith pointed out in The Provincialism Problem, it creates a tension “between two antithetical terms: a defiant urge to localism (a claim for the possibility and validity of ‘making good, original art right here’) and a reluctant recognition that the generative innovations in art, and the criteria . . . are determined externally”. Local artists are caught between a desire for authenticity, which often means responding to their environment, and a need to articulate and measure themselves in external terms.

The inclusion of “international” in these festival titles undoubtedly serves to indicate the scope of the festival programme and ensure the organisation is well-disposed for global opportunities. Yet it is also a signifier of values, adapting the international as a marker of sophistication and maturity, unwittingly bringing with it undercurrents of cultural cringe.

Galway, “Ireland’s cultural heart”, is known for creativity and artistic success, yet a contrary reputation also persists. The Dylan Thomas quote apparently referring to Swansea as “the graveyard of ambition” is often lazily applied to Galway. Local artists create work in the shadow of successful native arts organisations while simultaneously being told repeatedly that their aspirations are doomed to failure because of where they live. That any location should be seen as a mark of failure, or lack of ambition, is objectively absurd. In Am I Still an Artist?, Lynne Fanthome acknowledges that in the visual arts it is widely accepted that to be successful, artists need to move to London or farther afield.

Regardless of profession, one makes a decision about where to live based on a series of factors: work, affordability, connection to place etc. Within this decision lies compromise, and for those artists who choose to live outside of major artistic centres, the compromises must be carefully weighed: income prospects are lower but so are living costs; presenting opportunities are fewer but competition is less; the distance to centres of creativity and influence is farther but the standard of living is higher; audiences are smaller but the connection with them can be deeper.

A common trajectory for artists is to study or train abroad before returning to, or settling in, a location that meets their needs. International training and connection are something artists, myself included, are quick to highlight. We mention our European links and global internships as a way to add value to our experience and weight to our practice, acutely aware that our local status contrasts with the value of internationalism.

Operating under the burden of a postcolonial inferiority complex, we adopt the values of those who have the resources to shape our development in the hopes of becoming an artist of relevance, and thus we ourselves perpetuate cultural cringe and the hierarchy of values from (lowly) local to (intoxicating) international.

Where 12 months ago artists were encouraged to engage in cross-border programmes and collaborations, there is now a shift into digital programming with incentives for upskilling and presenting online. Audiences throughout the world attend performances streamed from our own homes and local venues: the audiences now create the international element of cultural exchange and the local becomes exotic.

This change in how we deliver our work is, for many artists, a welcome one. In response to the environmental impact of air travel, several international artists and organisations had already adapted overland travel policies for touring, which every artist and organisation must now consider. Such changes to the methods of dissemination of work arguably transform the value and interpretation of internationalism.

The past year has seen a surge of grassroots mobilisation across the sector, from the Independent Artist Group to the We Are the Support Act campaign, and the formation of the country’s first artist union, Praxis. Conversations highlighted the unsustainability of the sector prior to Covid and its vulnerability in the coming months and years (later verified by the E&Y Report for the Arts Council). There have been rallying cries to support not just the arts as an industry (its institutions and organisations), but the artists and freelancers who make their home here.

In response to the mobilisation and campaigns, last October the Irish Government announced funding of €180 million for the arts and entertainment industries. This allowed the Arts Council to support more than 530 artists through bursaries alone. Venues launched initiatives to engage local artists and some festivals and organisations announced new schemes to support the development of new Irish work.

Borne out of an economic necessity to “save the arts”, this activity points to a re-evaluation of the arts as a pillar of society, a recognition of the sector’s frailty and a realisation that it is those arts workers who make their homes here who will be required to revive the sector in future. Local artists and organisations will be ready before airports are fully operational; when they are, we must face questions about the necessity and environmental cost of touring.

In April 2020, Edinburgh International Festival director Fergus Linehan spoke of a return to the festival’s original values: “The old approach is no longer sustainable either environmentally, or in terms of the real value of the arts, which are much more than just a branding exercise.”

This re-evaluation may prove an example of how shifting the priority from the international to the local can have wide-reaching and long-lasting effects. There’s an opportunity to create new infrastructures that provide greater investment and prolonged supports for artists, and to have an impact on Edinburgh’s citizens, whose fight against the negative effects of the city’s “rampant over-growth” culminated in the formation of the Easter Rising group in 2019.

Amid all of this change and disorder is an opportunity for the arts to take stock of how we were functioning, what we were championing and where we were going – what Linehan describes as “a world in which the arts are framed as part of a wider economic regeneration agenda that’s all about tourism and never-ending growth”.

What’s required now is not simply the elevation of native work – we must be wary of a “local shop for local people” ideology – but the re-emergence of a vibrant cultural sector that puts local and international on equal footing. In doing so, it creates a value system that encourages us to be kinder to the environment, celebrates artists of diverse backgrounds and geographies, and appreciates potential, as much as proven, talent.