Tim Burgess: The listening parties are here to stay 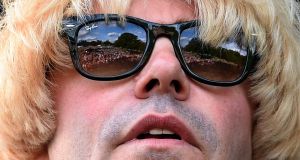 People need culture in their lives – now and always, says Tim Burgess, lead singer of The Charlatans, author and all-round good guy. Especially now, he adds with real emphasis, when Covid-19 resists every request to cease and desist.

To say Burgess has been adding all things bright and beautiful to the cultural arena since March 2020 is an understatement. When you least expected something, anything, on Twitter to remove you from your personal Dead Zone for a while, along comes Tim’s Listening Parties (number of followers at the time of writing 46,000-plus), which makes its Irish debut at this year’s Dublin Bowie Festival.

They started, however, not 10 months but 10 years ago, when Burgess reckoned the idea to celebrate the 20th anniversary of The Charlatans’ debut album (Some Friendly) would be an interesting way to invite fans to the party. Over the intervening years, he shared all of The Charlatans albums as well as his solo releases.

“They were things that I knew my Twitter followers would really enjoy. Of course, from March of last year it kinda took on a life of its own. It started with albums by people I had contact numbers of in my phone – Dave Rowntree from Blur, Paul Arthurs from Oasis, Alex Kapranos from Franz Ferdinand and so on, but it broadened out to others, generally people that I followed on Twitter.”

The process is simple, he explains. At an appointed time, you stream or play the album under discussion, jump on the Twitter train driven by Burgess and his passengers and read the tweets in real time. Pop in by asking questions about songs and the musicians who made them and share relevant memories, thoughts, theories. What was he initially expecting from these “together-apart” gatherings?

“From the interest for the early ones I knew that people really liked them. From April onwards I was doing more than one per day. Sometimes, especially during summer, I’d do what I called LP festivals – up to eight per day. That couldn’t last, of course, as they are very time-consuming to arrange, but I certainly had a notion they’d grow in popularity.”

One of the primary benefits of the parties, I suggest, is that  they break down barriers between fan and musician – there is no “us” and “them” about the process.

“No, there isn’t. In fact, there is a more casual atmosphere between the fans and the musicians we have as guests. For starters, there are no cameras or lights or getting ready to do anything other than sit down at the computer or laptop and join in. For the musician there’s no pressure to be “on”, so to speak – they can be in their pyjamas, hair messed up, no make-up and so on.

“There’s also a level of interaction, honesty and off-the-cuff remarks that you normally wouldn’t get in your typical physical meet-and-greet situations. Some musicians are, initially, a bit nervous taking to Twitter, but they soon get into it.”

Burgess mentions other positive byproducts (albeit virtual) of the listening parties: not just a sense of community for those connected but also an impression that the musicians (and host) really enjoy the interaction. “After the sessions finish, you get great feedback, especially from the musicians who say it’s as if they’d just played a festival gig – sweating, buzzing!”

And, of course, the events treat the album as an entity in itself and not just a collection of disparate tracks. Burgess agrees that listening to an album in full in one sitting is something of a dying pastime, but that 2020 was the year when people had more time on their hands to do just that.

“For many musicians of any age the album is the end game, and that has been proven again and again by the listening parties over the past 10 months. Fans want to know so many things about certain songs, how they sound the way they sound, the production, the mood, everything. Some of the questions are great – people really want to know nitty-gritty details, and the only people that can provide that information are the musicians who created the songs.”

No lights, no camera

A sense of how serious Burgess views his online success is how he has resisted commercial sponsorship. Despite his (we are sure he would shudder at the term) “influencer” status, he has refused to monetise the parties. “I’m happy doing it the way I’ve been doing it,” he says. “Some people have suggested I bring in cameras and lights and refine it a bit more but that’s for other people to do, not me. I’m happy doing it for free and without the kind of sponsorship that might change it.”

There are no clouds hovering over these silver linings. In April 2020, in an article he wrote for the Guardian, he remarked that “we could keep this going until Christmas”. Yes, he says approvingly, that deadline has well and truly been passed.

“There is no end to what we could choose to listen to and talk about. At the start, it was albums by bands that people would know – acts such as Oasis, Chemical Brothers, Blur – but as the months went by, I also chose records by under-the-radar acts such as Pip Blom and The Orielles, whose music I just really liked. That mix has worked out well.”

The blend of known/emerging acts continues. A major coup by Burgess at the close of 2020, however, was nabbing Paul McCartney for a listening party for his third solo album, Paul McCartney III. A Twitter request from him prompted Macca to respond with the familiar “thumbs up” emoji. “Reader – he said yes!” Burgess subsequently tweeted.

In other words, things can only get better and bigger, but the listening party head honcho knows lockdowns won’t last for ever. What happens, I ask, when bands, including his own beloved Charlatans, start touring again? Will the Twitter sessions drift away? Not a chance, he says.

“I’ve been booked by festivals to do it live, so that’ll be good. Yes, we will gradually go back to normal this year, but the feedback I’m getting is that people want it to continue, so it will for as long as there’s interest. It might not be two or three per night as it currently is, but it will.”

All events are online; all discussion/interview-based events are hosted by Bowie expert and acclaimed author Nicholas Pegg.

Turn and Face the Strange: Hunky Dory Reimagined by Shobsy
Sunday, January 10th, 8pm
At the Culture Vultures event during last year’s Dublin Bowie Festival, State Lights lead singer Shobsy delivered a short set of Bowie songs, leaving everyone in the room with a warm glow. He returns this year with a do-not-miss track-by-track presentation of Hunky Dory.

Authenticity – What a Drag!
Tuesday, January 12th, 8.30pm
Dr Alex Sharp returns to the festival with an audiovisual presentation that – as viewed through a Bowie lens – confronts “the notion that truth resides in authenticity”.

Tony Visconti: The Stories behind the Songs
Thursday, January 14th, 8.30pm
The single most important mainstay of Bowie’s recording career is producer/musician Tony Visconti, who returns (virtually) to Dublin Bowie Festival to outline the process behind the songs on Hunky Dory.

Rick Wakeman: In Conversation
Friday, January 14th, 8pm
The trajectory of Rick Wakeman’s career has been fascinating: from one-time Bowie associate, to an integral part of prog-rock group Yes, to a solo artist who presented one of prog’s most absurd/audacious conceits: the staging of his fourth solo album, The Myths and Legends of King Arthur and the Knights of the Round Table, on ice at London’s Wembley Stadium in summer 1975.