John Lasseter will take ‘a six-month sabbatical’ after unspecified ‘missteps’ 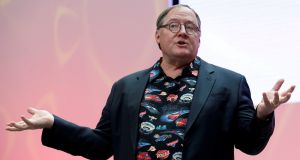 Lasseter: ‘No matter how benign my intent, everyone has the right to set their own boundaries and have them respected’ Photograph: Reuters

One of the Walt Disney Co.’s most important executives, Pixar co-founder John Lasseter, said on Tuesday that he would take “a six-month sabbatical” after unspecified “missteps” that made some staffers feel “disrespected or uncomfortable.”

Lasseter (60) made the announcement in a lengthy email sent to employees at Disney’s animation division, which he leads as chief creative officer. “I especially want to apologize to anyone who has ever been on the receiving end of an unwanted hug or any other gesture they felt crossed the line in any way, shape or form,” Lasseter wrote in the email, a copy of which was viewed by The New York Times. “No matter how benign my intent, everyone has the right to set their own boundaries and have them respected.”

Disney said in a statement: “We are committed to maintaining an environment in which all employees are respected and empowered to do their best work. We appreciate John’s candor and sincere apology and fully support his sabbatical.” A spokeswoman declined to comment further. Shortly after Lasseter’s announcement, The Hollywood Reporter published an article that cited “grabbing, kissing, making comments about physical attributes” as recurring behavior by Lasseter. The article also said Rashida Jones, the actress and writer, had left a Pixar assignment early after Lasseter made “an unwanted advance.” Jones and her writing partner, Will McCormack, had been working on the screenplay for “Toy Story 4.” Jones and McCormack said their departure was tied to Pixar’s general treatment of female and minority employees. “The breakneck speed at which journalists have been naming the next perpetrator renders some reporting irresponsible,” they said. “We did not leave Pixar because of unwanted advances. That is untrue. We parted ways because of creative and, more importantly, philosophical differences.

“There is so much talent at Pixar, and we remain enormous fans of their films,” they continued. “However, it is also a culture where women and people of color do not have an equal creative voice.” Jones and McCormack concluded the statement by saying: “We encourage Pixar to be leaders in bolstering, hiring and promoting more diverse and female storytellers and leaders. We hope we can encourage all those who have felt like their voices could not be heard in the past to feel empowered.”

Over the years, Pixar has been criticized for a lack of female directors. Pixar has made 19 feature films, and only one of them, “Brave,” has a credited female director. That woman, Brenda Chapman, was fired halfway through production after she clashed with Lasseter. Chapman subsequently joined DreamWorks Animation, telling The Times in 2013 that “you can butt heads here and not be punished for it, unlike at another place I could name.”

Many Pixar movies have been produced by women. As part of his oversight of the separate Disney animation studio, Lasseter hired Jennifer Lee as a co-director of “Frozen.” The animation business as a whole is a boys’ club, even more so than the live-action film industry.

Lasseter is taking a leave of absence as hundreds of women (and some men) have stepped forward with allegations of sexual harassment against men in Hollywood, the news media, politics, higher education and other industries. Some men, including Harvey Weinstein and Charlie Rose, have been fired by their companies.

Because of his enormous creative input across the entertainment conglomerate, Lasseter has been heralded as a latter-day Walt Disney. He departed one day before Disney was set to release Pixar’s latest film, “Coco,” in North American theaters. In addition to overseeing feature animation for Disney, he is a principal creative adviser to Walt Disney Imagineering, which designs theme park attractions.

While sometimes moody behind closed doors, Lasseter has an exuberant public image. At events for Disney fans, he often bounds onto the stage wearing a Hawaiian shirt and uses a cannon to fire T-shirts into the cheering crowd. He commonly weeps during interviews when talking about heartwarming scenes from Pixar movies like “Toy Story 3.” He owns a winery in Sonoma County with his wife, Nancy, with whom he has five children.

Like many executives in Hollywood, Lasseter has long used hugs and kisses on the cheek instead of handshakes in business settings. Over the years, he has taken the practice to the extreme, giving lengthy hugs to both men and women wherever he goes. In 2011, The Wall Street Journal published a photo slideshow about his frequent hugging, saying he had embraced 48 people in one day.

In his email to the staff Tuesday, Lasseter said he had agreed in “conversations with Disney” that concerns about his behavior should be treated with “the seriousness they deserve.” He added that a sabbatical “will give me the opportunity to start taking better care of myself, to recharge and be inspired, and ultimately return with the insight and perspective I need to be the leader you deserve.” – New York Times

In a week of tributes to John Hume, a 12-year-old has the biggest impact
4

Robert Sheehan: ‘I was a contrarian f**ker. I thought it made me seem more edgy’
9