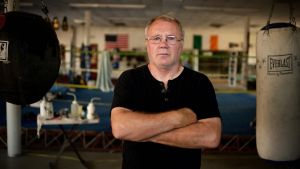 He could have been a contender. Even Angelo Dundee, Muhammad Ali’s cornerman, thought so: “If I had had that guy at 20,” said the legendary trainer of Connemara pugilist Sean Mannion.

In October 1984, as Mannion was preparing to fight Jamaican Mike McCallum at Madison Square Garden for the world super welterweight title, a corporate sponsor came courting.

The Irish contender could have $5,000 if he sported their logo on his waistband. “I said I couldn’t,” recalls Mannion. “I would wear it at the back if he wanted. But I couldn’t change the front because that had ‘Ros Muc’ on it.”

Undaunted, the wannabe sponsor came back with a better offer. And another. And another. At the $25,000 mark, the boxer explained that he’d even turn down a million. Perplexed, they wondered what Ros Muc manufactured to give them such an edge. “Human beings,” said Mannion.

Michael Fanning’s Irish-language documentary – one of the record 170 documentary features vying for the 2018 Oscar – opens with this anecdote, as a way of introducing its uncompromising subject. He’s “principled”, as Mannion’s biographer Rónán Mac Con Iomaire has it.

He needed to be. Mannion, a native of the small village of Ros Muc in Galway, emigrated to Boston as a teenager in the 1970s. His sparring partners were often members of Whitey Bulger’s Winter Hill gang, including the Irish-American mobster Patrick Nee, who, despite his thick Southie brogue, is another Ros Muc native.

Mannion’s career has previously been explored in the award-winning RTÉ documentary Never Knocked Down. Rocky Ros Muc chronicles Mannion’s rise through the boxing ranks, but it equally explores the psychology of emigration and enclave populations, such as Dorchester in Boston, where Irish is widely spoken and where the “squeaky wheel” used to ensure that the police and fire departments recruited Gaelic speakers first, Irish-born second and Irish-Americans after that.

The film, which was released in the US last month, is careful, perhaps a little too careful, not to intrude on its subject’s marriage. His battle with alcoholism is alluded to but not explored in depth.