What I learned about mental health from watching The A-Team 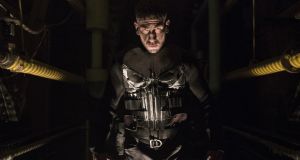 He works hard for the money: The Punisher

My first encounter with mental health on television was on The A-Team. I’ve written about this before. I’m slightly obsessed with The A-Team. The most on-the-nose characterisation was that of pilot “Howling Mad” Murdoch who was clinically “howling mad” and whose treatment was halted whenever his friends broke him out of the mental institution. You see, they didn’t care about his health, they just wanted him to fly a plane.

This was doubly troublesome because another member of the group, irate peacock BA Baracus, had a phobia about flying and so, logically, had to be regularly rendered unconscious with a blow to the head or drugs. Times have certainly changed. To quote the HR department of The Irish Times: “The antics of The A-Team are no guide to interacting with colleagues in the modern workplace, Patrick.”

And yet, that didn’t stop TV drama using psychological problems as a quick and easy way to give an underwritten character “depth”. For a while in the aughts, the way to pitch a cop show was to pick a random noun for a name and a diagnosis from the Diagnostic and Statistical Manual of Mental Disorders in lieu of an actual personality. So, we had Monk, for example, with his obsessive compulsive disorder-aided detection skills. Arguably this should have gone away in the golden age of television, but after a stellar first series of Homeland, I began to suspect that Carrie Mathison’s bipolar disorder was a similarly shallow shtick and that she would soon be introducing herself as CIA agent John Homeland.

This has all been made even more problematic because ancient superheroes are taking over the culture. So we got nerdy Bruce Banner with his rage issues and short-shorts and Bruce Wayne who processes childhood trauma, like most billionaires, by dressing in rubber and beating up the poor. All of these characters have begun washing away the subtleties of prestige drama with simplistic psychological bol***ks originally cooked up to entertain bright children in the post-war years. (The one exception is Legion by Noah Hawley with its inventive, stylistically stunning exploration of schizophrenia.)

The most recent addition to the canon is Netflix’s The Punisher. Even in his comic book form, Punisher is barely a superhero at all. His power is that he is angry and has PTSD and his costume is a skull-themed jumper like that worn by Danny from the Bash Street Kids.

He’s not entirely new to television. We last saw him on a roof in gruff Socratic debate with Daredevil (an angry superheroic lawyer who was once bitten by a radioactive bondage, discipline, dominance and submission fetishist) over the correct way to deliver brutal vigilante justice without trial. Nowadays, this is what passes for philosophy in mainstream superhero stories (see also Captain America: Civil War). It’s also an indication of how far the Overton window in the US has moved to the right. Daredevil and his “let’s beat them to the point of death but not kill them” policy seems like a centrist Democrat by today’s standards.

Are we not all, in our own ways, gruntingly hammering a wall with our mallets?

The new show begins with an opening montage in which Punisher, aka Frank Castle (Jon Bernthal), enacts violent revenge on the people who killed his family, then retires to a New York construction site to gruntingly hammer a wall with a big mallet for days on end. Why? How useful is that, really? I suspect it’s a metaphor. Are we not all, in our own ways, gruntingly hammering a wall with our mallets?

Frank is bearded and fluffy haired to indicate that he is in decline (see byline photo above for confirmation of this phenomenon) and he is scorned by his brutish colleagues, who foolishly mock him and will, by the end of the first episode, be writhing around in bloody broken-limbed agony.

I’m sorry for not giving a spoiler alert there, but, to be fair, the programme makers stop just short of flashing the word “doomed” on the screen whenever these witless Punisher-taunters appear.

Still, I find it hard not to have some sympathy for these minor thugs, given that one of them teasingly refers to Frank as “Captain Batshit” which is a far better superhero name than Punisher. Using it as a title might be a better way to signpost Frank’s issues in season two.

At one point, this friend tries to talk Frank into getting some therapy

Apart from all the grunting and hammering and recreational killing, Frank also befriends a young co-worker and saves him from the aforementioned thugs. Then he also lurks in the shadows at a meeting of traumatised war veterans run by a friend. At one point, this friend tries to talk Frank into getting some therapy and inadvertently makes a pitch for a Punisher branded self-help book. “The only person you’re punishing, Frank, is yourself,” he says, which made me laugh aloud. I started thinking about how you could apply it to other superheroes.

“The only person you’re Spiderman-ing, Peter, is yourself.”

“The only person you’re WolverinefromtheXmening, Logan, is yourself.”

“The only thing you cannot transform, Optimus Prime, is your heart.”

So, five episodes in, here’s what I’ve learned: Frank’s family died in consequence of his own morally dubious activities in Afghanistan. Therefore Frank must do more punishing. (Well, what did you expect? Restorative justice?)

Frank’s family, Mrs Punisher, Punisher jnr and Punisherette, apparently spent their last days in summer clothes laughing joyously. We get endless flashbacks of them throughout the early episodes being delightful in the hazy sun.

Punisher likes Bruce Springsteen (grunting men are drawn to each other I guess).

Punisher’s other hobbies include going full Rambo in the woods of an autumn evening.

Punisher’s new pal, a computer-whiz, can afford state-of-the-art surveillance equipment but not a cleaner for his dusty secret lair. His family think he’s dead, so Punisher starts flirting with his wife because he’s basically a jerk.

There’s also, in the early episodes, a baddie who tells all his secrets to Punisher for no good reason while gloatingly holding Punisher at gunpoint before inevitably choking to death on his own blood. Lots of baddies underestimate Punisher and die screaming.

Frank, I suspect, will not end up getting therapy

That last bit is the sole point of the show. Everything else is there to provide dodgy moral and thematic justifications for the ultra-violence. There’s a subtext about America’s foreign escapades coming back to haunt a divided nation, but the creators are also keen that we can enjoy the simple pleasures of watching Frank bludgeoning someone to death with a rock. Frank, I suspect, will not end up getting therapy.

Anyway, it got me thinking about how the best television programmes about sadness in recent years have all been comedies. While Punisher, through lack of imagination and an overdose of dour pretention, devolves into tedium, stylistically inventive, Day-Glo-bright shows like The Unbreakable Kimmy Schmidt, Lady Dynamite and Bojack Horseman manage to mine something very real and humane out of their characters’ PTSD, bipolar disorder and existential angst.

And this week, two new shows continued exploring such themes: Alison Spittle’s Nowhere Fast (RTÉ2), which riffs on failure and depression, and Rachel Bloom’s comedy musical Crazy Ex-Girlfriend (Netflix), which followed its ongoing journey through one woman’s obsessive behaviour, all the way, plausibly and heartbreakingly, to a very real suicide attempt. Punisher could learn from these programmes. And when it does I think they should also embrace the name “Captain Batshit”. Lean into it, Frank.