Philosophers on the ‘intriguing ethics’ of sex robots

Unthinkable: Sexbots are under development. Don't ban them, an academic team advises

Artificial intelligence (AI) is making its way into the global sex market, bringing with it a revolution in robotic "sextech" designed to offer sexual gratification with a near-human touch. Video: Thomson Reuters Foundation 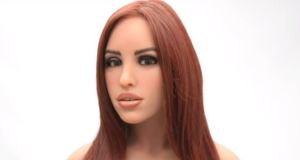 A prototype of Harmony, which offers an “alternative form of relationship”, according to its manufacturers RealDoll. Image: RealDoll/YouTube

The robots are coming, and it’s not just your job they’re after. If the futurologists are right you may soon be waking up after a night’s romancing with a piece of silicone-enhanced technology next to you in the bed.

“Sex robots” are already under development, the most advanced of which – a $15,000 (€12,700) home pleasure unit called Harmony – was unveiled this year in California (where else?). The sex tech industry is already estimated to be worth $30bn (€25m), based on demand for existing “smart sex toys”, and the products are set to become more lifelike in tandem with advances in artificial intelligence.

But what does this mean for future human relationships and will any moral boundaries apply to the new technology? The issues are explored by NUI Galway academic John Danaher and Neil McArthur, a philosopher at University of Manitoba, Canada, in their book, Robot Sex: Social and Ethical Implications (MIT Press).

Promoters of the technology say the availability of sexbots will help counter loneliness among those who don’t have a sexual partner, while also potentially reducing the demand for prostitution and accompanying human harm. But opponents, including researchers who have formed a group Campaign Against Sex Robots, say the new technology is “part of rape culture” and is likely to stimulate further exploitation and sex crime. (Tellingly, most of the prototype sexbots are female rather than male.)

Answering questions from The Irish Times for this week’s Unthinkable column, Danaher and McArthur advocate regulation rather than prohibition. New technology is morally neutral, they suggest, “it is how we manifest and control the technology that matters”.

Why should we pay attention to the issue of robot sex?

Danaher and McArthur: “The development of this technology raises a number of intriguing ethical and social questions, for example (i) how will sexbots affect intimate relationships between human beings? (ii) Will they harm the user and the society around them? (iii) Is there something problematic about the symbolism of sex robots? (iv) Can you have a loving intimate relationship with a robot?

“There are also interesting questions having to do with the possibility of robot personhood and our moral duties to technology.”

You argue against the prohibition of robot sex but should it be regulated?

“We think total prohibition is mistaken for three reasons. First, it seems unlikely to be successful, given past experiences with prohibitionism. Second, it ignores or downplays potential benefits of this technology. And third, it overlooks or underestimates the cost of policing and enforcing such a ban. That said, some sort of regulation seems desirable.

“All commercial products have to be regulated in some ways – on grounds of safety, environmental impact, etc. Sexbots will also require regulations to address issues raised by many digital technologies. Is the user’s privacy protected? Can they be hacked?

“There are some issues specific to sexbots. We believe there may have to be laws preventing people from having access to child sexbots. We also may want to place restrictions on the age of people who can purchase them. Finally, we may have to regulate how sexbots look. People may not want sexbots modelled off of them, and celebrities especially may want to exert control over the use of their likenesses.”

“There are certainly legitimate concerns of this kind, though not everyone would agree that self-gratification need be dehumanising. More conventional sex toys, for example, do not raise such concerns, except among certain conservative religious groups.

“It is certainly true however that sexbots can be used to enact certain kinds of human-type relationships that we might not consider praiseworthy. However it’s not clear that our moral judgements should be directed at the technology itself, even if that technology potentially enables certain kinds of behaviour.

“Cars allow people to drive in ways that are selfish and destructive. Telephones make it easier to be mean to people since you don’t need to look them in the eye. Text messages make this easier still.

“Technology can bring to the fore issues that we as a society should be talking about when it comes to how we treat each other. But we should not make the mistake of thinking the technology by itself is somehow to blame.”

“Our reading of the empirical evidence is a bit more nuanced than this. You can certainly find studies that suggest a causal link between exposure to pornography and negative or dysfunctional behaviour. But you can also find lots of studies suggesting that these effects are negligible, as well as quite a few suggesting positive effects.

Have you any moral duties to the robot in robot sex?

“This depends on whether a robot is capable of being a moral victim or a holder of rights. There is an emerging and active philosophical debate on this. Our view is that if a robot is behaviourally indistinguishable from an entity (eg human or animal) to whom we ordinarily have moral duties, we would also have moral duties to the robot. In other words, a kind of ethical Turing test applies.

“That said, there is a curious inconsistency in our approach to this. One of us – Neil – has a son who recently participated in a competition at his school that allowed him to build a robot and battle with other robots in a fight for survival. The school saw this as a great way to interest kids in technology, and indeed it’s part of a national programme used widely in schools.

“It’s interesting that people are much more concerned about having duties to sexbots than they do to battle bots.”