Legal advice to be sought over Communicorp ban on Irish Times 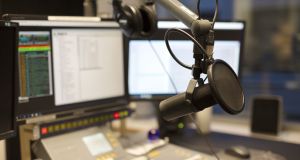 The broadcasting ban has angered some staff at Newstalk and Today FM, several of whom have complained to their stations’ management. But it remains in force. File photograph: Getty Images

The Broadcasting Authority of Ireland is to seek independent legal advice as to whether Denis O’Brien’s Communicorp has breached the terms of radio licences granted to it under the Broadcasting Act.

The move follows a decision by the authority’s compliance committee which has been looking into the company’s decision to ban staff at four of its radio stations – Newstalk, Today FM, Spin1038 and Spin southwest – from interviewing anyone from The Irish Times.

On Thursday the BAI declined to comment, beyond repeating an earlier statement that it was “engaged in discussions with Communicorp on a number of matters”.

However, it is understood that the authority is concerned that by imposing a blanket ban on its staff, thereby restricting the service they can provide their listeners, Communicorp may have put the four stations in breach of the terms of their licences to broadcast, which are granted by the authority, or the Broadcasting Act itself.

Unlike newspapers and magazines which are not regulated by statute, as such, but are covered by the law of defamation, broadcasters operate by licence. The terms of these vary from station to station but seek to regulate the quantity and type of material broadcast. There is also a broadcasting code of practice.

Newstalk programme director Patricia Monahan wrote a riposte to O’Toole, which the Irish Times published, but Serle then sought an apology which was refused.

He then told staff at the four stations that “no Irish Times journalist, commentator, or reporter will appear on any Communicorp stations or shows, with immediate effect”.

The ban has angered some staff at Newstalk and Today FM, a number of whom have complained to their stations’ management, but it remains in force.

It is understood that the BAI hopes that legal advise indicating what, if anything, the authority can do will be available for the authority’s December meeting.