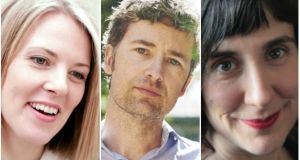 Three Irish writers are among the 20 authors shortlisted this evening for the Costa Book Awards.

Karl Geary, the former actor and screenwriter, has been shortlisted for the First Novel Award for Montpelier Parade, along with Xan Brooks for The Clocks in This House All Tell Different Times; Rebecca F John for The Haunting of Henry Twist; and Gail Honeyman for Eleanor Oliphant is Completely Fine, which is to be adapted for the big screen by Reese Witherspoon’s production company. The judges called Montpelier Parade “a beautifully-written story about the pain and wonder of love found in unexpected places”.

Forward Prize winner Sinéad Morrissey has been nominated for the Poetry Award for On Balance along with Kayo Chingonyi and wild food forager Richard Osmond, both for debut collections, and Helen Dunmore, who died earlier this year. The judges said of On Balance: “This collection appropriately strikes a balance between technical mastery and range and depth of enquiry.”

Sarah Crossan features on the all-female Children’s Book Award shortlist alongside former comedy producer Lissa Evans, Katherine Rundell and Kiran Millwood Hargrave. Crossan’s novel, Moonrise, about two brothers, one on death row, is “an exceptional, compelling book for our time – its analysis is devastating but its message is hope,” said the judges.

Stef Penney, 2006 Costa Book of the Year winner, has been shortlisted in the Novel Award category together with Jon McGregor, Kamila Shamsie and actor and novelist Sarah Winman.

The Costa Book Awards is the only major UK book prize that is open solely to authors resident in Britain and Ireland and recognises the most enjoyable books across five categories published in the last year.

2017 Costa Biography Award shortlist
Xiaolu Guo for Once Upon a Time in the East: A Story of Growing Up (Chatto & Windus)
Caroline Moorehead for A Bold and Dangerous Family: The Rossellis and the Fight Against Mussolini (Chatto & Windus)
Rebecca Stott for In The Days of Rain (4th Estate)
Prof Stephen Westaby for Fragile Lives: A Heart Surgeon’s Stories of Life and Death on the Operating Table (HarperCollins)