‘Children are not people of tomorrow, but people today’

A message from Dr Niall Muldoon, Ombudsman for Children 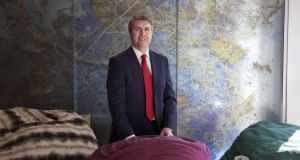 Ombudsman for Children Dr Niall Muldoon: “We need now, more than ever, to recognise that the rights of many children and young people living in Ireland are not being fully protected or realised.”

The Ombudsman for Children’s Office is delighted to have the opportunity to collaborate with Fighting Words and The Irish Times on this commemorative supplement Children’s Rights, Children’s Writing.

As Ombudsman for Children I seek to hear children’s voices every day, but today, Universal Children’s Day, is most definitely a day to put children and young people first. It is a day to listen to them and to give them the opportunity to have a voice about the things that matter to them.

It’s been 25 years since Ireland ratified the UN Convention on the Rights of the Child (UNCRC) when the State made a promise to children to prioritise their rights and to hear their voices. It is important that we remember, reflect and act on that promise.

The 25 young writers featured here provide us with their own unique, insightful and individual perspectives of what it is to be a child or young person living in Ireland in 2017. Their views express how they see rights in reality. From all parts of the country, their voices represent very different lives and experiences and I wish to congratulate and acknowledge their contribution.

This is a complex and challenging time for children and young people who are coming of age. Issues such as mental health, disability, homelessness, sexuality and access to services loom large in the consciousness of this generation. This is a cohort of young people who lived through the early parts of their childhood in the centre of a serious economic downturn and still 10 per cent of those under 18 are living in consistent poverty. Now, as the economy is set to right itself and money is said to be more available, we need to ensure the ‘haves’ do not sail away from the ‘have-nots’. If we allow that to happen, we will have failed this generation twice.

If we can succeed in creating a society where every child has their voice heard and listened to, where every young person is fully considered in decisions affecting them and where no child is discriminated against for any reason, we would transform their world.

President Higgins, in an address to young people to mark the 25th anniversary of the ratification of the UNCRC called on them as “future rights enforcers” to use their “energy, ideals, creativity and courage” towards creating “a better version of ourselves”.

We all have a role to play in helping children and young people to realise their true potential. Whether you are the volunteer lining a soccer pitch for a youth match, the fundraiser for the youth band, the facilitator directing a local drama group or the leader in a youth club, you are promoting children’s rights, and we salute you.

The famous children’s rights activist, Janus Korczak said that “children are not people of tomorrow, but people today” and it is this sentiment that we are trying to capture throughout this year in our discussions about #ChildrenNowRightsNow.

We look forward to continuing the ‘right’ conversation with children, young people and across Irish society from Donegal to Dungarvan over the next 12 months.

With this in mind, we are issuing a national invitation to schools, young people’s groups and cross-sector organisations to get involved in this 25th anniversary year and in this supplement you can find information and suggestions to help and inspire you!

The United Nations Convention on the Rights of the Child

This year, 2017, marks the 25th anniversary of Ireland’s ratification of the United Nations Convention on the Rights of the Child.

The convention is a human rights treaty setting out the civil, political, economic, social, health and cultural rights of children.

The Convention defines a child as any human being under 18.

Nations that ratify this convention are bound to it by international law.

The UN General Assembly adopted the convention in 1989 and it came into force in 1990.

Ireland ratified the convention in 1992, and is now one of 196 countries that are party to it.

The Ombudsman for Children’s office is marking this milestone by extending an invitation across Irish society to celebrate ‘Children Now, Rights Now’.