Patrick Freyne: The best of TV in 2019 and what to watch this year 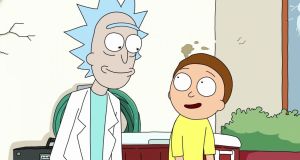 Rick and Morty: a show of mind-bending nihilism

In the olden days, people worried about young people watching too much television. Now that we’re all addicted to status updates and online fascism, watching a 30-minute television programme often feels like reading a really long, really boring book. Nowadays, I hate when people say sentences that have more than five words. Therefore, to start the year and in the interests of furthering the intellectual development of my people, I’ve collected some thoughts on my favourite recent television programmes, which are basically books.

Comedies that are all about trauma and depression

Comedy is where all the serious telly is happening now. Bojack Horseman continues to use the satirical surrealism of its animal-headed Hollywoo (not Hollywood) to explore the psyche of a depressed cartoon horse, while also implying that the horse deserves a reckoning for his toxic behaviour. Russian Doll took a dark fantasy about a woman condemned to die over and over again and made it a story of childhood trauma and the need for connection. And in This Way Up Aisling Bea managed to make a girl in the big city scenario into a heartbreakingly hilarious story about depression. It all began, of course, with the sensitive portrayal of mental illness we got from “Howling Mad” Murdock in the A-Team.

A show I resisted because I’m a contrarian

From a haughty distance, I mistook Succession, a drama about a Murdochian cable news proprietor (Brian Cox) and his power-hungry brood, as another of those anti-heroic shows that was light on nuance but heavy on pompous American power worship. Like Christmas dinner at my house. I was wrong. I hadn’t realised that it was created by Jesse Armstrong, the British co-writer of Peep Show, and that it was actually an uproariously incisive comedy dressed up as a portentous high-stakes drama for Halloween. The DNA of Armstrong’s gag-writing is there in its most heartbreaking lines and in the layer of circumstantial irony that hovers over each troubling scenario. It somehow manages to take the suffering of the Roy family seriously while simultaneously lampooning the sad/stupid details of how wealth has corrupted them. Of course, the limits of satire are evident in the fact it airs on the formerly Murdoch-owned Sky Atlantic. Perhaps there is more than one “Howling Mad” Murdock. But don’t let that put you off. Watch Succession.

Programmes that remix rather than remake

I also greatly enjoyed Damon Lindelof’s sequel to the old Alan Moore/Dave Gibbons graphic novel, Watchmen (Sky Atlantic). Lindelof realised, I think, that treating the book too reverently was disrespectful to the spirit of the book. He starts with a completely new set of characters and instead of focusing on the subject that grounded it in the 1980s – the threat of nuclear annihilation – he grounds it in the very 21st century subject of white supremacy. And he does this while still sampling the book’s aesthetics, ambition and plot details in every frame. This type of remix has been done before with television franchises, most notably in Noah Hawley’s three series riff on the Coen Brothers’ Fargo. It’s fun to watch someone with vision playing in someone else’s toy box. It’s also fun to watch angry fanboys criticise the show for not taking the original’s tale of a nude, blue superhero seriously enough.

I have two very different shows in mind here. Firstly, there’s Donald Glover’s Atlanta (BBC2), the newest season of which felt more like a series of short interconnected independent films than a comedy series. Some were appealingly odd, like Teddy Perkin, in which a character goes to buy a piano from a reclusive musician. Others are naturalistic and unapologetically told from a black working-class point of view.

The second is the cancelled then re-commissioned by popular demand One Day at a Time (Netflix). A remake of the classic 1970s Norman Lear sitcom, it recasts its protagonists as a single-parent Hispanic family and deals with race, gender and migration issues without deviating from a zippy sitcom format.

Next year, sees similar re-imaginings of old stories with Nick Hornsby’s High Fidelity remade with biracial actress Zoe Kravitz in the formerly white male central role, and a version of moody teen drama Party of Five in which the five siblings have been rendered parentless, not by a car crash, but by the repatriation of their parents to Mexico.

This televisual phenomenon might have begun with Twin Peaks but that town had nothing on the weird places where I grew up. There are lots of strange goings on in small Irish towns (in just the planning departments alone) but when it comes to television drama we have to go elsewhere. Recently Netflix has gifted us with the densely-plotted German time-travel family drama Dark and the looser, equally unsettling, Black Spot, about a crime-ridden French town with an eerie pagan past. Both have disturbing yet satisfying stories to tell and are somehow tonally distinct from anything else on television. They’re the shows to watch if you feel that Black Mirror’s hold on the zeitgeist has slipped and that Stranger Things has turned into a cartoon.

The funniest television programmes are of the hand-drawn variety. On one extreme you have the mind-bending nihilism of Rick and Morty (E4), a dimension-hopping superscientist and his abused nephew, and on the other there’s the life-affirming hilarity of Bob’s Burgers (Comedy Central), a family drama grounded in idiosyncratically absurd character detail. In both instances the characters seem more real to me than many of my colleagues, neighbours and close family members.

The local is universal. So, the very Cork-based Young Offenders and the very Derry-based Derry Girls impressed their way into second series on BBC3/RTÉ2 and Channel 4. In both instances creators Peter Foott and Lisa McGee have made the most of the fact that teenagers can be simultaneously vulnerable, selfish, absurd and endearing. In the process they’ve created hilarious and moving teenage microdramas set against a backdrop of social deprivation and/or sectarian violence. Sadly, many UK viewers believe both are set in a suburb of Birmingham.

The dragon show has ended and TV networks are about to spend a decade commissioning bad programmes involving sex, magic and people who say “thee”.

Downton Abbey and the The Crown have shown us there’s a lot of mileage in high-budget period cosplay and Julian Fellowes, creator of the former, returns in 2020 with Belgravia.

Over the past decade Ru Paul took the fringey Drag Race right into the mainstream and next year stars in drag queen-meets-runaway buddy drama, AJ and the Queen.

Love Island taught us the importance of both love and being a small open island economy.

Disney now owns all the space men and most of the superheroes. It’s what Walt would have wanted, I’m sure. We’ll know when they unfreeze his head.

In 2020, I have high hopes for Lenny Abrahamson’s Sally Rooney adaptation Normal People, Armando Iannucci’s sci-fi/comedy Avenue Five, Cate Blanchette’s tribute to second-wave feminism Mrs America, and the Star Trek/Last of the Summer Wine mash-up Picard, in which Patrick Stewart returns to the role he played two decades ago in Star Trek: The Next Generation.

Finally, the best dramas of the whole decade were The Good Wife, Succession, Justified, Orange is the New Black, Dark, Happy Valley, Search Party and Rectify. Don’t argue with me. That’s just a fact.

The Music Quiz: What song did the BBC say was 'too depressing' to play
4

Arthur Miller voiced the hopes and fears of ordinary Americans
9