Patrick Freyne on the ascent of Amber, from investigative journalist to modern-medieval queen 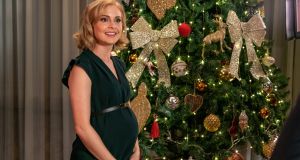 Modernising the monarchy does not, as far as Amber is concerned, need to involve introducing democratic reforms or the redistribution of wealth or abolishing the monarchy. Photograph: Cos Aelenei

The Royal Baby, as you know, is a terrifying infant who is reborn every few years to dominate the tabloid headlines and rule the Britons with a chubby fist of iron. My wife says these are all different royal babies, that there are several of them and that I misunderstand the British political system, but I know what I see.

The Netflix film, The Royal Baby, the third in the A Christmas Prince series, is about a very different Royal Baby. This Baby makes an appearance only at the end of this film, like Jaws. It’s also a different royal family, not the British one with which we’re familiar, with its alleged sex pests and strangely dressed Edwardian children. The Netflix Royal Baby is from the Aldovian royal family.

A few words about the Kingdom of Aldovia.

Aldovia is a snowy central European country which, according to a map we see during the film, is located in the Balkans. Everyone in Aldovia speaks English in an English accent. It’s the version of an English accent that Americans love, which is one that feels designed to come out of snaggle-toothed, squinty-faced heads, accompanied by insincere apologies and golly-goshes and polite chauvinism. There’s a bit in the film where some Aldovians are singing a carol and it’s like 20 Dick Van Dykes of different ages and heights are singing “Chim Chim Cher-ee”.

Aldovia is not a constitutional monarchy. It’s an old-fashioned regal kleptocracy in which a single family control the fortunes of a whole people, like Saudi Arabia or Kerry. Of course, this film is made for Americans, and Americans think feudalism is nice, so the Aldovian monarchy’s oppressive tyranny is very pleasant and filled with nice jumpers and log fires.

The economics of Aldovia, which are central to this film, are very confusing. It is unclear what the main industries in Aldovia are but they appear to be the production of Christmas decorations and eggnog, not to mention the provision of sleigh-ride services. Aldovia also appears to have only about 100 people in it and they all live in a Christmas market. Even when the King is making an open-air royal pronouncement, only about 60 people show up. Why is it so depopulated? This might simply be because the producers underinvested in extras, but given the seasonal nature of their livelihoods I suspect a lot of the Aldovian peasantry simply die off in the summer months. Best not to think about it.

Our hero, Queen Amber, started out in the first instalment (A Christmas Prince) as an investigative reporter sent to investigate the flaky new prince of Aldovia. As happens often in journalism, she falls deeply in love with the subject of her investigation. He is hunky and misunderstood, and he rides horses in the snow. She is spunky and well-understood, and is filled with newfangled ideas like “computers are good” and “perhaps women should vote” and “maybe fire is science not witchcraft”. By the end of the first film, her journalistic standards saw her having it off with a head of state and being beloved by those renowned schmucks, the people of Aldovia. Exactly like what happens to me whenever I go and investigate something for the Irish Times.

Now, by film three, Amber is pregnant and says things like, “I want this baby to have a normal life”. She says this as she is propelled through the royal family’s vast grounds in a carriage, gazing out at a country she now basically co-owns. Amber is intent on modernising the monarchy. She is doing this by writing a blog. Yes, a blog, like that one your uncle did his racism on in the noughties. This is like modernising the monarchy by printing a pamphlet or operating a spinning jenny. It is, let’s be clear, a ye olde blog.

Modernising the monarchy does not, as far as Amber is concerned, need to involve introducing democratic reforms or the redistribution of wealth or abolishing the monarchy. She wants to do things like make the monarchy equal for women, which is basically boardroom feminism. And she wants to do it by being adorably quirky and flawed. The quirks and flaws are not things like, for example, befriending fascists or frequenting the home of a paedophile sex trafficker or dressing as a Nazi at a fancy dress party or being recorded having phone sex with one’s mistress, which are just some quirks and flaws the real royal family have demonstrated. No, Amber’s quirks and flaws are things like being clumsy and knocking things over sometimes and occasionally eating doughnuts.

Aldovia’s ancient enemy is Penglia, which is an Asian state a few countries to the east. The Aldovians owe the Penglians billions of Aldovo-bucks (I can’t remember what pretend currency they have) and Amber is the only person who can sort that out, having come all the way from America where they have maths and calculators. Furthermore, every 100 years or so the two kings of Aldovia and Penglia must get together to sign an ancient piece of parchment. If this is not signed, a treaty between their two kingdoms is not renewed and the two states are, once again, at war. Also, the Queen’s firstborn, the eponymous Royal Baby, will be subjected to an ancient curse. This is the sort of trade deal I imagine Britain will be signing when it eventually leaves the EU. Couple this with climate change, and snowy medieval Aldovia might be a picture of the future.

For now, the Aldovian and Penglian royals seem happy enough until it’s time to sign ye olde parchment; at which point they all discover, to their horror, that the treaty has been stolen from the weird carved wooden box in which it is kept. Oh no! What will they do?

They play an olde board game beloved by the Aldovian royal family because it is all about the history of their own family. They go to ye olde Christmas fair. They go ye olde ice skating. They do some ye olde archery. The Penglian ice queen Ming and Queen Amber have a “We’re not so different you and I” moment. Then Amber goes into labour, and while she is in labour she and her friends solve the mystery of the missing parchment. It was literally the butler who did it. He tells us about the ancient feud his family have had with the royals and also lets slip that he has worked for the family since he was a child. This is probably the sort of child labour law that Amber should look at modernising. Instead she has the butler taken away and killed. I presume. Though to be honest we’ve learned very little about the Aldovian justice system.

They find the treaty and everyone signs it just in time to save Amber’s baby from “the curse”. Then Amber gives birth while the entire cast just hang around watching (most of the cast are left over from the previous films and have nothing to do). Moments later we cut to Amber, who doesn’t look remotely stressed out by the experience of childbirth. She is clutching a suspiciously large baby. It looks about 10 years old. This, at last, is the Royal Baby after whom the film is titled. “God bless us everyone,” says the Royal Baby in a deep man’s voice, its eyes flashing red. Ah yes, that’s the Royal Baby I know.

Inside the dark web: ‘The truth is there is a lot of evil out there’
9