Patrick Freyne: Ant and Dec will always be with us, like poverty and Fianna Fáil

Once we wanted our celebs glamorous. Now we want them crying on I’m a Celebrity 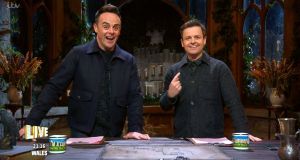 In a time of plague, it makes sense to me that Ant and Dec would hole up with a pile of celebrities in an old medieval castle waiting it all out. Photograph: ITV

In a time of plague, it makes sense to me that Ant and Dec would hole up with a pile of celebrities in an old medieval castle waiting it all out. In The Masque of the Red Death, Vincent Price (the Ant and Dec of his era, possibly even literally Ant on Dec’s shoulders and wearing a long coat) did something very similar, but eventually the walls of his castle were penetrated by Death Himself.

In I’m a Celebrity Get Me Out of Here (Sunday to Thursday, Virgin Media One), death is represented this year, I think, by cheeky EastEnders star and three-time winner of Britain’s Sexiest Male, Shane Richie. Somehow I knew death would be a cheeky cockney and winner of Britain’s Sexiest Male. Here he is telling us about the time he went go-karting with Tom Cruise: “We’d talk about stuff, but mostly go-karting.” Take me now, death.

Let’s be clear, Ant and Dec will never get their comeuppance like Vincent Price’s Prince Prospero. Because Ant and Dec will always be with us, like poverty and Fianna Fáil and Chewits. Every year now, the great are brought low for three weeks as our favourite light entertainment homunculi chortle nearby. Victoria Derbyshire and Shane Richie carrying a chemical toilet? Radio 1 DJ Jordan North vomiting on a cliffside? Vernon Kay gagging on a sheep’s testicle? Coronation Street’s Beverley Callard being doused in maggots? Yes, it is very important that we keep supporting the arts at this difficult time.

This year’s pandemic-shaped version of I’m a Celebrity Get Me Out of Here occurs not in the jungles of Australia but in a big draughty castle in Wales. Given that the apparently authentic jungle always manages to look like the creaky set of a Timmy Mallett children’s show, the programme doesn’t suffer much due to the change.

The castle features flaming torches on the walls and suits of armour and huge chemical toilets and two chuckling goblins who turn up every now and again to inflict pain. I don’t know who first decided to give Ant and Dec a batch of minor celebrities each year. All I know is that the gods are seemingly happy with this tribute and we’ve had a great decade, give or take some autocracy and a bit of plague.

In keeping with their status, some celebrities arrive in a convoy of six individual helicopters. This is, I think you’ll agree, a very welcome attack on that chancer, “the environment”, who has been a total git to us this year with Covid. “You’re going to inflict a society-halting pandemic on us? Well we’re going to use six helicopters for no reason,” the producers seem to say on our behalf.

Meanwhile, the celebrities say things like, “I don’t want to be a screamer” (soap star Jessica Plummer) and “I probably won’t survive this” (Callard), which bodes well for future screaming and hardship. Sweet-natured Radio 1 DJ North tells us that he is afraid of heights and snakes.

The producers have him abseil down the face of a cliff, then they put him in a coffin filled with snakes. If I know the producers, the cliff probably said: “I’m terrified of being clambered over by Radio 1 DJ Jordan North” and the bunch of snakes said: “We can cope with most anything except being stuck in a coffin with Radio 1 DJ Jordan North.” Anyway, we clap with joy as North dry heaves and gibbers and weeps. That’ll teach him to be open and vulnerable.

Is this healthy? Well prior to the abseil, Kay says of North’s vomity gibbering: “For his own mental wellbeing I think if he gets this one out of the way and overcomes his fear of heights it will set him up nicely for his time in camp.”

And Kay, as you know, is a doctor. The fact is, in the olden days we wanted our celebrities to be mysterious and glamorous and unknowable but now we want to see them spew fluids and cry. They deserve it for entertaining us, the b******s. Or to put it in Dr Vernon Kay’s encouraging words to North, “You’ve done heights, you’ve done snakes and now you’re going to eat lamb’s balls.”

There’s another popular programme that’s also about a bunch of depressed celebrities trapped in a castle eating horrible food. The Crown (Netflix) is a beautifully made and wonderfully acted show about some very boring people. You see, for their national icon, the British have inexplicably chosen an unhappy rich family as opposed to a cross or a harp or a cool animal or a tree. And that family has about the same amount of agency as those aforementioned things. They’re a family that things happen to.

Of course, it can be pretty compelling when the things that happen to them are Margaret Thatcher (Gillian Anderson) and Diana Spencer (Emma Corrin), as is the case in this season. But for the most part, the hereditary grumps sit around grumbling in huge houses as the real history of Britain happens somewhere else (in Steve McQueen’s Small Axe, for example, a wonderfully dramatised social history of Caribbean Britishness that began on BBC1 on Sunday).

We know the outcomes. We know the general shape of British society would be the same no matter what these people did or do. They’re pretend rulers, cosplaying as their ancestors. They don’t even like it.

Whenever we see the Queen (Olivia Coleman) riding her horse across windswept Scottish mountains, it’s clear that she’d prefer to be pretending to rule some hills than pretending to rule people. In the first episodes of the series we see the royals’ obsession with hunting paralleled with the steely yet naive Diana’s stalking of Charles and naive yet steely Thatcher’s gutting of the state.

The latter, like the IRA murder of Mountbatten, comes with dangerously little context in the early episodes. Our interest, and the programme makers’, lies, instead, with the strange family-shaped void of meaninglessness at the centre of British tradition. It’s glossy nihilism for the pandemic weary masses.

At its best, the Crown manages to depict edgy tedium and societal inertia in a completely unique way, usually thanks to the strength of the actors. At its worst, it’s a nifty guide to the properties that will be seized when the revolution comes.

At one point in episode two, the Queen says to Thatcher, as she drags her out on a deer-hunting expedition, “The trick is to disappear into nature to preserve the element of surprise” and for a glorious moment I imagine an episode in which the Queen terrorises a small town like in Rambo First Blood. I’ll watch the rest of this series in hope and report back.