Patrick Freyne: Nigella Lawson is not a chef, she's a food playwright

Here's the thing, herbs and spices are costumes. Rice and pasta are ‘extras’. Bowls and plates are sets. Chicken is the lead character 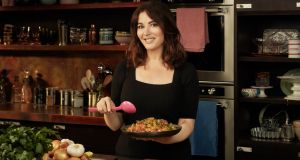 Here’s the hill I will die on: recipe books should be in the fiction section of book shops because recipes are fiction, not non-fiction. Bear with me. I feel that over the next few paragraphs you’ll see that I have made a compelling case and your view of cookery books will have changed forever.

Food as God intended it – apples, oranges, carrots, ducks, mushrooms, prawns, Curly Wurlys – are undeniably non-fictional entities, sprouting from the earth and blossoming in the sun (especially ducks). However, the “ingredients” part of a recipe is just “the cast”. The cast is non-fictional in the same way that Ralph Fiennes or Stan Laurel or Gwyneth Paltrow are non-fiction. Foodstuffs in the context of a recipe are actors, in the same way that in emergency situations, actors can be transformed into food (that’s for a very different Irish Times Food Month a few dystopian years from now).

Already some of you will be all like: “Shut up, Freyne. Food aren’t actors!” Others will be nodding their heads in agreement. This will make intuitive sense to anyone who regularly says things like: “Who’s that guy again? He’s in everything. That’s it! Potatoes!” or “This guy always plays baddies. I think he’s called ‘Kale’.” Or “Phoar! I’m desperately sexually attracted to this young ingenue, Turnips.”

It is, however, the next part of my argument that the rest of my readers and hopefully the judges of the Booker Prize will find most convincing. Let me set the scene. It was month six of lockdown and we were making dinner. I was reading a recipe aloud to my wife in the kitchen when I was struck by something. The “method” part of the recipe looked like stage directions. I threw the book on the floor and said, sonorously: “Recipes. Are. FOOD PLAYS! Herbs and spices are costumes. Rice and pasta are ‘extras’. Bowls and plates are sets. Chicken is the lead character.”

My wife wasn’t impressed, so I abandoned food production to call some friends. My friends weren’t impressed either. “I’ll put it in the paper of record,” I said to myself. “That’ll make this part of the national conversation.”

The fact is, Neven Maguire and Jamie Oliver and Clodagh McKenna are food playwrights. They have looked at the sheep in the fields and the apples in the trees and the mushrooms of the ground and thought “Pshaw! God’s creation isn’t enough for me, I can do better.”

They have set out to create attractive lies from the fabric of existence. And attractive lies, as you know, are just another way of saying “fiction”. Yes, gnawing on a slow sheep in a wet field, like what you like to do, that’s nonfiction eating. But eating a lamb curry? That’s food being something it’s not. You’re consuming a “food play”. Food playwrights or “chefs” (if you insist on calling them that) have put food into completely makey-up scenarios which we, like local amateur dramatic societies, endeavour to then produce in our kitchens and mouths. “Food plays” like “people plays”, are usually either tragedy or comedy. And “food plays” like “people plays” tell us something about the society in which they were created.

In a way, if you or any politicians out there disagree with my desire to elevate recipes up the hierarchy of arts, I’d argue that you hate the Irish food industry. Yes, food will be moved from the Magazine to the Ticket immediately (note to self: check if I have the authority to do this). And, in conclusion, I hope that you’ll see that in the run-up to Christmas it would not be right for recipe books to appear in the non-fiction book charts. And this has nothing to do with the fact I have a non-fiction book out right now.

With that said, over on Nigella’s Cook, Eat, Repeat (Monday, BBC2), the excellent Nigella Lawson endeavours to produce and direct several of her own acclaimed “food plays”. The title is even a touch Beckettian. “Cook, eat, repeat, is frankly the story of my life,” she says at the outset, followed by a split-screen montage of Nigella mixing, drizzling, scooping and shovelling food into her charismatic head, much like a sensuous Sisyphus.

As food dramaturgs go, Nigella has a compelling turn of phrase. “We all know that cooking can be a balm in troubled times but more I believe the kitchen can be both a sanctuary and a pleasure palace,” she says. To which, the traditional response is: “fine, but do I have to do anything?”

She has a whole season’s worth of food plays to show us and she demonstrates how ready she is to get going by wearing a top with racing stripes down the arms. Yes, this is a no-nonsense production with few lifestyle fripperies around the edges, just plain old cooking and eating and the occasional Star Trek reference (Nigella unexpectedly mentions the Klingon dish “gagh” at one point).

She marshals her food cast deftly, casting glances and asides at the camera which follows her around the warmly lit kitchen like a faithful hound. Cookery shows are basically “making of” documentaries after which we can’t actually sample the item in production. Though we can, I believe, produce Nigella’s food plays ourselves at home, even adding asides to an invisible camera crew if we like (we do).

My favourite of her food plays/food lies was “fish finger bhorta” starring my favourite food actor, “fish fingers”, not appearing here as human-like digits on a fish, as nature planned, but smooshed up/fictionalised and augmented by an ensemble cast of chilli, garlic, lime, ginger and spinach. Like all great directors Nigella has a knack for unusual casting decisions.

This evening, for example, she also casts a much-denigrated bit-player “banana skins” into a showpiece production called “banana skin curry”. This blew the minds of simple and easily stimulated people of the internet. In fairness, though it’s a common enough theatrical food-trope in some parts of the world, here it feels like that time Tarantino cast John Travolta in Pulp Fiction. Speaking of “pulp fiction” the rest of the banana is used to make a food play called “chocolate, tahini and banana pudding”. This latter production probably ascends to the status of food erotica, really. But no one was hurt. It’s all just fiction (see opening arguments). Next week: why music is “sound fiction”.