Patrick Freyne: Pooing in a bucket? That’s the whole point of the show 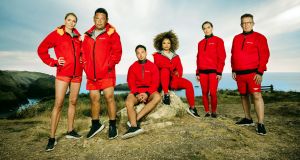 These days people frequently observe how dystopian novels like The Handmaid’s Tale and 1984 are harbingers of today’s unpleasant realities (see this week’s election across the water in Gilead). Pshaw. Atwood and Orwell are mere amateurs, because I remember reading a strip in Viz comic in my youth in which the character Roger Mellie the Man on the Telly proposed an outrageous television show called Celebrity S**t in a Bucket.

Well friends, I have just watched a celebrity s**t in a bucket on the television, much as Mellie foretold. In fact, I am of the strong view that new reality television programme Don’t Rock the Boat (Monday to Friday, Virgin Media One) probably had the working title Celebrity S**t in a Bucket but that this was changed at the last minute by squeamish middle-management. In fairness, Don’t Rock the Boat’s co-presenter, the hunky quidditch player Freddie Flintoff, never actually says the words “Welcome to the programme in which celebrities s**t in a bucket”. But I’d say it was in the original script.

On the face of it Don’t Rock the Boat is a programme in which two rival bands of celebrities race rowing boats along the west coast of Britain, no doubt protecting British fishing rights and reminding the people at home where the borders lie in time for their splendid isolation. That said, celebrity effluent is a recurring theme of this boating escapade and it does, in fact, end up in a bucket. In fact, at one point in the first episode the actor Craig Charles needs to poo and vomit at the same time, presenting him with a sort of bucket-related Sophie’s Choice. It’s quite moving. Though, again, in fairness to the programme-makers, they don’t linger over this moment with split screens or slow motion. Instead, they understate it with a simple exclamation of, “Oh, he’s puking and s***ting,” from glamorous model Jodie Kidd

Almost everyone on this show vomits. And that sentence is also a potential programme title

As well as Charles and Kidd, the show features popstar Fleur East, a veteran of The X Factor and I’m a Celebrity Get Me out of Here. As a consequence, she has a thousand-yard stare and only some qualms about using the bucket. “Doing a number two in a bucket, I’m really not looking forward to,” she says. It’s the whole point of the show, Fleur!

And there’s former Labour party deputy leader Tom Watson, who can clearly see more dignity in taking part in Celebrity S**t in a Bucket than being involved in contemporary British politics (and who could blame him?).

There are also two former Olympians, Denise Lewis and Victoria Pendleton, and a “Pussy Cat Doll”, Kimberly Wyatt. The latter is introduced as though a “Pussy Cat Doll” is a widely recognised profession like “stevedore” or “optometrist” (It is! I’ve looked up the points and I could probably have done it in TCD). There are also three cheeky chappies of the sort beloved by light entertainment producers. “Cheeky Chappy” is probably also a college course now. I am going to call them something cute like Snap, Crackle and Pop. Or maybe Nevada, Michigan and Wisconsin. I can’t make my mind up.

Almost everyone on this show vomits. And that sentence is also a potential programme title. But now that I’ve watched a few episodes I can see there is a bit more to it than I may have led you to believe in the early paragraphs. Yes, I came here for the celebrities and their s**t bucket but I stuck around for the gruelling challenges and the camaraderie. I particularly enjoy the touching bromance between Watson and Charles, ageing men at crossroads in their lives. I also like Lewis and Wyatt’s collective lust for glory. “This has the makings of a titanic battle,” says Lewis at one point, indicating, I think, that her team would be the iceberg. I also like that one of the cheeky chappies responds to someone’s suggestion that he is as intelligent as an amoeba with, “What’s an amoeba?”.

Of course, these are small boats, so not every member of the six-person teams can fit inside them along with the sleeping area and the s**t bucket, so while two teams of four exhaust themselves at sea, Flintoff and co-presenter AJ Odudu take four spare celebrities and make them do terrifying things on a cliffside in what they call a “Land Challenge”. Watching celebrities scream as they dangle from ropes and pulleys over a chasm isn’t as much fun as you might imagine.

But what actually is quite fun, is watching the teams learn to work together and trust each other as they engage in the quite gruelling task of rowing a boat. I’m usually sceptical of shows in which celebrities endeavour to do the things professionals usually do – dancing/heart surgery – but when it’s genuinely difficult physical feats that require teamwork it’s often quite compelling. Also, as I may have mentioned, they have to poo in a bucket.

Apologies for all these scatological shenanigans at what is the start of Food Month in the Irish Times. I also watched some food-related programming this week, most notably Donal’s Family Food in Minutes (RTÉ 1, Wednesday) in which the always likeable food guru, Donal Skehan, demonstrates the kind of meals he just throws together for his family from “store cupboard” ingredients.

Over the course of this we see his lovely house, charming wife and delightful children, not to mention some footage representing his fond memories of living elsewhere. “Stop mocking us with your perfect life, Skehan,” I growl. Why do no television chefs stumble to a stained countertop beneath a single bare bulb, naked from the waist up (or down), food stuck to their hair, muttering about how they’re going to make something delicious with a few things they found stuck in the couch? Surely some food boffins are also sad basket-cases? I mean, if it works for writers and artists, there must be some culinary mavericks living on the edge of decency?

The food looks delicious and potentially recreatable even by the likes of us. That said, I have doubts that Skehan’s notion of “store cupboard” ingredients are the same as mine. His include white beans, Dijon mustard, capers, basil leaves, prawns, a few steaks. But what can you make with squiggly pasta, an old bottle of crème de menthe, a tin with no label, a family pack of Haribo Supermix and sadness, Donal? What can you make with that, you handsome, charming, Tintin-quiffed genius?