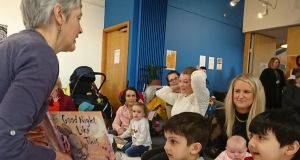 The Deepest Breath by Meg Grehan (Little Island) has been shortlisted for a Waterstones Children’s Book Prize 2020. The winners will be announced on March 26th.

Limerick babies who were read to from the age of three months attended a special ‘meet-the-author’ event at Dooradoyle Library yesterday. The babies, who are celebrating their first birthdays, are participating in Bookseed, a €75,000 scheme run by Children’s Books Ireland, delivered in partnership with Limerick Libraries & the HSE, and funded by the JP McManus Benevolent Fund and Social Innovation Fund Ireland. The project aims to get parents reading to their babies from birth. The Bookseed books are by Irish author-illustrators, Owl Bat Bat Owl by Marie-Louise Fitzpatrick and Shh! We Have A Plan by Chris Haughton.

The full programme for the 14th Ennis Book Club Festival has been announced. In a new departure, it has commissioned writer Mia Gallagher to curate a special exhibition from the Arts Council collection, showing at glór from February 7th until March 21st and to write a short story inspired by the artwork. Metamorphosis: Characters in Collision features work by some of Ireland’s finest and most innovative artists including Alice Maher, Dorothy Cross, and Brian Maguire.

Corvus has bought two new titles by bestselling thriller writer Catherine Ryan Howard. Her third novel, Rewind, will appear in paperback in May. Her debut, Distress Signals, was shortlisted for the CWA John Creasey/New Blood Dagger and her second novel, The Liar’s Girl, was nominated for a Best Novel Edgar. The first novel in this new deal, As Told To, will be published in autumn 2021, following The Nothing Man this August.

Writing.ie’s Vanessa Fox O’Loughlin, aka bestselling Irish crime writer Sam Blake, has recently been elected to the board of the Society of Authors, where she will be working with Chocolat author Joanne Harris, who has just been elected chair of its management committee.

Museum of Literature Ireland has launched the Edna O’Brien Young Writers Bursary, a five-day immersive programme for teen writers this July. Students between 15 and 17 years of age can apply at moli.ie/ednaobrienbursary. The winning applicants will be mentored by author Alan McMonagle.

Clonkeen College Press is publishing its ninth edition of the Anthology series of student writing in April. Advance orders can be placed by contacting ccp@clonkeencollege.ie.

There is a feast of book features in The Irish Times this Saturday. In Weekend Review, Joshua Wong, author of Unfree Speech: The Threat to Global Democracy and Why We Must Act, Now, is interviewed by Peter Gough. In Ticket, Anne Enright discusses her new novel Actress and her time as Laureate of Irish Fiction with Hugh Linehan; and Katherine McSharry of the National Library recalls the complex and often controversial character of Stephen Joyce, James Joyce’s grandson and literary executor. In the Magazine, John Boorman talks to Donald Clarke about Conclusions, the latest instalment of his memoirs; and Colette Sheridan visits the last surviving traditional wooden boat yard in Ireland outside Skibbereen, which has been captured in a new photographic book, Hegarty’s Boatyard by Kevin O’Farrell.

Our reviews include Philip O Ceallaigh on Dresden by Sinclair McKay and Fire and Fury: The Allied Bombing of Germany and Japan by Randall Hansen; Eoghan Smith on The Secret Guests by BW Black; Mic Moroney on Crisis of Conscience: Whistleblowing by Tom Mueller; Shaun Whiteside on Strange Hotel by Eimear McBride; Karl Whitney on Sam Wasson’s The Big Goodbye: Chinatown and the Last Years of Hollywood; Henrietta McKervey on The Water Dancer by Ta-Neishi Coates; John Self on How to Argue with a Racist by Dr Adam Rutherford and How to be a Fascist: A Manual by Michela Murgia; Niamh Donnelly on House of Trelawney by Hannah Rothschild; Sarah Gilmartin on Illness Lessons by Claire Beams; and John McAuliffe on new books by Eiléan Ní Chuilleanáin, Chris Agee, Rachael Hegarty and editors Pat Boran and Chiamaka Enyi-Amadi.

Knife by Jo Nesbo is this weekend’s Irish Times Eason offer. When you buy Saturday’s newspaper, you can also purchase this latest slice of Scandi noir by the bestselling Norwegian for just €4.99, a saving of €7.