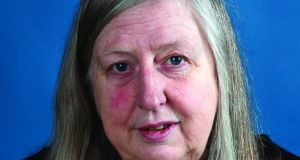 Eiléan Ní Chuilleanáin explores what exactly it is about poetry that has enthralled her. Photograph: Brian Mcgovern

Instead of a Shrine (UCD Press, €20) collects the three lectures Eiléan Ní Chuilleanáin delivered as part of her duties as Ireland Professor of Poetry. Ní Chuilleanáin possesses a wonderfully engaging, curious imagination and the lectures explore what exactly it is about poetry that has enthralled her, and other readers, across her life. Each has a particular starting point, for example: her friendship with the poet and translator Pearse Hutchinson; the ways in which readers of poetry are represented in fiction; how poems draw on religious ritual. Sometimes the book is very funny, in her memories of pub readings in Dublin in the 1960s, or when she recounts how poetry readers, and poets, are represented by PG Wodehouse and Agatha Christie; at other times, there is a sort of amazed acknowledgement of the ways in which poetry entered the life of others, copied out in their diaries, “evidence”, she writes, “that poems can reach across cultural and temporal and national gaps”.

This is a terrific, wise, companionable book, possibly the best of a fine series. Its many provoking thoughts will resonate with readers, such as this, from among her concluding remarks: “There are debts we cannot pay. To write poems is not to claim that we can write off those debts, but to acknowledge them. The sense of debt being due comes in part from the multitude of unfairnesses that crowd history [...]Poetry does not balance because if there were a balance, an equipoise, it would not need to move.” And as she declares, in this book which should become a fixed star and reference point in the realm of Irish literature, “poetry is motion”.

Ní Chuilleanáin is excellent on language, and on how a shared interest in different languages nourished her friendship with Pearse Hutchinson. The anthology Writing Home: The “New Irish” Poets (Dedalus, €14.50), edited by Pat Boran and Chiamaka Enyi-Amadi, opens a different door into a sense of a larger, shared culture. In his introduction, Boran is uneasy about saying anything definitive about the poets in the anthology, but his uncertainty – about whether the poets are international or Irish, or best characterized as temporary travellers – is understandable when he includes Irish-American, English and Canadian poets alongside European, African and Asian poets. At any rate, this is clearly a first step in broadening our sense of what is happening, and what will be happening, in Irish poetry.

Among the best poems here, Polina Cosgrove’s Dog I Can’t Keep begins “First language is a dog I can’t keep anymore / Barking in the back of my mind”, but the poem catches the intractable tension in our relation to language: “Stay, I command. / But it goes wherever it pleases, / Reminding me who is the real owner here”. Simone Sav has a similarly parable-like tone in The Present, which sets out “to buy a present / for the person I hate most”. Co-editor Enyi-Amadi writes freer, drifting poems which shift easily from metaphor, memory as “a wool blanket, / fraying at the edges” to reading the NY Times online and checking her calendar on Google, to a not unhappy meditation on love as an “epic guessing game”. Bogusia Wardein and Nidhi Zak / Aria Eipe are equally good with long-lined lyrical poems, while Victoria Melkovska’s sequence The Back Door strikes a different note. Tuned in to idioms, she shows us her Irish house from her visiting mother’s amazed perspective:

is the strangest of all.

Not my ceiling-mounted windows, no.

Not stepping on the pleasantly heated floor.

She wonders at something so trivial:

And her fingers smelling of dill

left many miles away,

and invite itself in.

Chris Agee might see himself as one of the Dedalus anthology’s forerunners. Long resident in Belfast, Agee is as well known for his work with poets from Bosnia as his poems about the native US and his moving book-length elegy for his daughter, Next to Nothing. He has now established his own press and one of its first publications is his Blue Sandbar Moon: A micro-epic (Irish Pages Press, €18). An unusual book, well over 200 pages long, it begins with a quartet of centred stanzaic poems, then a pair of poems in couplets, and a prose poem, before the micro-epic itself starts, a series of notes and observations, each of them dated and located as the poems move between Ireland, Scotland, The Hague and Croatia.

While it may seem that Agee’s book is various, it feels, as the reader speeds through the “micro-epic”, that they are so many variations on a single poem, some of which piercingly capture, or are captured by, the loss of his daughter, whose memory or absence recurringly haunts the book. The prose poem, Parable of a Summer, may be the most challenging and interesting piece here, although its ending’s desire to overwhelm with abstraction nearly topples its good image of an “ant which hauls its awn of straw” by adding “with Sisyphean purpose, towards the Eocene’s version of our own technohive”. The micro-poems, at their best, approach the same haunted, fearful music of Ciaran Carson’s remarkable Until Before After. The M of blossoms is one of many poems to picture a deserted scene to which the poet was once, and forever, “called back”: “never / to return / to that stilled / coffee cup”.

Rachael Hegarty’s May Day 1974 (Salmon, €14) also offers an original take on the poetic sequence. As her foreword outlines, she was a child in town on the day that three bombs went off in central Dublin, with another in Monaghan. Her poems remember each of the 34 dead, a bare number which she comprehends and brings to life by making what she calls docu-sonnets out of the relatives’ testimony, and ballads which imagine situations from their lives. Documentary poetry has become prominent through poets like CD Wright and projects like Kimberly Campanello’s MOTHERBABYHOME, but Hegarty’s juxtaposition of prosy, speech-inflected sonnets with dramatic, often song-like ballads is a singular achievement. This book’s artful acts of recovery reflect, to use Ní Chuilleanáin’s terms, debts we cannot pay, which may nonetheless be acknowledged in poetry.