Fairytale of New York: The five most memorable covers. And not always in a good way 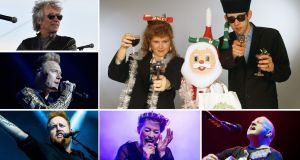 Christmas has been tough for us all. But imagine how difficult it must be for Shane MacGowan and his fellow Pogues. As if a global health crisis isn’t enough, their immune responses will have also been severely challenged by Jon Bon Jovi’s tilt at their seasonal classic, Fairytale of New York. To say Bon Jovi’s take on the song has not gone down well is a bit like pointing out that Brexit has had one or two unforeseen hitches.

So which version is the best? The obvious answer is the original – although some will argue that it itself is mawkish and pickled in self-pity and was justifiably beaten to the Christmas number-one spot in the UK in 1987, the year it was first released, by the Pet Shop Boys. But, setting that caveat aside, how do the other interpretations stand up?

What’s that? You haven’t listened to the dozen or so Fairytales of New York clogging up Spotify like a fat man in a red suit stuck in your chimney?

What’s that? You haven’t listened to the dozen or so Fairytales of New York clogging up Spotify like a fat man in a red suit stuck in your chimney? Then let us be your guides as we count down to the five most memorable – not best, “memorable” – versions now streaming.

Jon Bon Jovi isn’t the first person that comes to mind when you think Christmas ennui. Yet the consensus is that, even with these low expectations, his Fairytale is a Chrimbo calamity. Here’s a breakdown of the cover’s components and how it scores overall.

Heartbreaking misery: Bon Jovi doesn’t sound particularly miserable. He comes across as more mildly irritated. As he plunges into the chorus, it is with the miffed air of someone who’s just remembered they left their phone in the car and are now going to have to briefly step outside to retrieve it.

Christmas spirit: Is Fairytale of New York a Christmas song? Bon Jovi doesn’t seem to think so. His reading has all the seasonal magic of a barbecue in July. One where it’s just started raining and you’re pretty sure the burger isn’t cooked all the way through.

The F-word: This is where Bon Jovi’s Fairytale goes property fruitcake. He doesn’t want to use the F-word, as is his prerogative. But instead of just bunging in a less offensive replacement, and pushing on, he crowbars in a whole new verse: “You’re a bum, you’re a braggart/ You’ve lost all your swagger/ And the word around town is you ain’t much in bed.” Wait, what? But he’s only getting started. “You’re a squirrel cause you’re nuts,” he continues. “You’re a kick in the guts.” Stop it, Jon. Stop. Quite apart from putting us off Christmas, potentially for all time, you’re making us question our belief in God, the laws of physics and the innate goodness of mankind.

Ronan Keating was one of the first artists to take on the Fairytale challenge, and his version, from 2000, has perhaps been unfairly vilified for that reason. He’s a pop singer who at the time was trying to pivot away from boy bands and into a career as soft-rock crooner. What did you think he was going to do with Fairytale of New York? Have Trent Reznor produce?

Heartbreaking misery: Keating sounds reasonably miserable as he dives into this duet with Moya Brennan, of Clannad. Although perhaps that’s less to do with the material and more because he’s had a premonition of how the recording will be received. His mistake, with hindsight, was attempting to sound like Tom Waits trying to sound like Shane MacGowan. It (a) doesn’t work and (b) merely draws your attention to the innate Ronan Keatingness of the entire endeavour.

Christmas spirit: I’m going to venture out on a very creaky branch and claim that Keating’s Fairytale is reasonably Christmassy. Not as Christmassy as a turkey dinner surrounded by loved ones. But nearly as Christmassy as an office party you got dragged to against your will and at which you drank too much wine and potentially insulted and/or threw up all over your boss. (You can’t remember – did you?)

The F-word: Keating was one of the first to see the potential issues around plonking a homophobic slur bang in the middle of a bawdy Christmas anthem, and he takes it out. (“You scumbag, you maggot/ You’re cheap and you’re haggard,” Brennan sings.) He received a lot of heat for that. Twenty years later, was he really so tone deaf?

Many artists covering Fairytale have attempted to sing both the Shane MacGowan and Kirsty MacColl verses. But you really, really notice the strain on Gavin James’s version. Maybe it’s because he seems so determined to turn the song into something it was never meant to be: a Heartfelt Irish Singer-Songwriter Ballad. Lean close and it almost smells of Whelan’s or of an Other Voices repeat that’s about to plunge you into a stupor.

Heartbreaking misery: I certainly feel pretty miserable as James starts. “Ittt waaaas… Christmassss… evveeeeee, baaaabe… iiiiiiiin… the druuuuuunk taannnnk,” he sings, stretching out each word, syllable and inflection as if trying to snap the song in two. The good news is that he calms down eventually. What’s left is perfectly fine – inoffensive, even. Alas, James never sounds truly beaten down by life, which is really where you have to go to make Fairytale of New York your own.

Christmas spirit: Fairytale features on James’s Winter Songs EP, from 2016. And while his version doesn’t drag you down into the Seven Circles of Seasonal Hell – that is very much Bon Jovi’s remit – it comes nowhere near the melancholy of the original. It won’t give you nightmares. But it has no real reason to exist.

The F-word: Yes, he goes there, although without making a song and dance about it.

The former Dresden Dolls singer teams up with the Australian songwriter and actor Kate Miller-Heidke. (You might remember her from the 2019 Eurovision, during which she wobbled around on a huge stick as she bashed out Zero Gravity, Australia’s entry.) It’s one of the rare Fairytales that tries something different with the material – in this case by turning it into a goth-rockabilly dirge. Whether the world requires a goth-rockabilly version of Fairytale of New York is a question we must each look deep within ourselves to answer.

Heartbreaking misery: Palmer and Miller-Heike rip up the spirit of the original and start over. This version is all rage, all the way. The sozzled ennui is gone; instead their duet has the quality of alligators snapping at one another.

Christmas spirit: I don’t know how your Christmases typically go, but with luck they don’t spill over with the sort of performative angst coursing through Palmer’s Fairytale. But at least it’s memorable.

The F-word: Palmer, singing the MacColl verses, shouts “f*****” as if delivering an invocation to the Elder Gods to rise up and deck the halls with hellfire.

“I was taking a ramble… and I ended up in a mushroom field near Gurthalougha… I stumbled into a fairy ring,” Moore says at the beginning of his tilt at Fairytale, from the 1991 Live at the Point album. Ooookay, Christy, you’re thinking, where are we going with this? “I was there three days, three nights, wandering like a lunatic…” He continues in this vein for quite some time. But then finally he arrives at, “It was Christmas Eve, babe,” and the audience claps (with excitement and possibly relief).

Heartbreaking misery: Moore imbues his Fairytale with a twinkling mischief. He honours the regret bound up in the original. But he brings something of his own too – a playfulness that almost borders on optimism.

Christmas spirit: There’s something slightly Christmassy about Christy Moore anyway, so this version will make perfect sense chiming out as you’re adjusting the lights on the tree or wondering why your Christmas jumper doesn’t fit as comfortably as it used to.