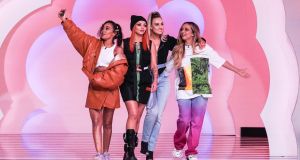 Jesy Nelson is leaving Little Mix, saying that being in the band has “taken a toll on my mental health”.

In a long Instagram post explaining her decision to leave the band, Nelson thanked fans and said that “recently being in the band has really taken a toll on my mental health”, but that being in Little Mix had been “the most incredible time of my life”.

Addressing fans in the post, she said: “We have achieved things I never thought possible . . . I can’t thank you all enough from the bottom of my heart for making me feel like the luckiest girl in the world.

“You have always been there to support and encourage me and I will never ever forget it. The truth is recently being in the band has really taken a toll on my mental health. I find the constant pressure of being in a girl group and living up to expectations very hard.

“So after much consideration and with a heavy heart, I’m announcing I’m leaving Little Mix.”

Nelson ended her message by thanking the remaining three band members, writing: “Most of all I want to say thank you to Jade, Perrie and Leigh-Anne for creating some of the most amazing memories I’ll never forget. I hope that you’ll continue to fulfil all of your dreams and keep on making music that people love. Love Jesy x.”

The band – now comprising Jade Thirlwall, Leigh-Anne Pinnock and Perrie Edwards – announced the news in a string of tweets.

They tweeted: “After an amazing 9 years together Jesy has made the decision to leave Little Mix. This is an incredibly sad time for all of us but we are fully supportive of Jesy.”

The band, who found fame on The X Factor, continued: “We love her very much and agree that it is so important that she does what is right for her mental health and wellbeing.

“We are still very much enjoying our Little Mix journey and the 3 of us are not ready for it to be over.

“We know that Jesy leaving the group is going to be really upsetting news for our fans. We love you guys so much and are so grateful for your loyalty and continued support of all of us.

The news follows an announcement in November that Nelson (29) would be taking an “extended” break from the band for private medical reasons.

Nelson had previously been absent from the final of Little Mix’s BBC One talent show The Search and also from a performance at the MTV Europe Music Awards.

A statement from the band’s publicist Simon Jones had said: “Jesy is having extended time off from Little Mix for private medical reasons. We will not be issuing any further comment currently and ask media to please respect her privacy at this time.”

Little Mix formed on The X Factor in 2011 and have become one of the UK’s biggest-selling girl bands.

They auditioned on the ITV singing show as soloists, but were then placed into a group by the judges in the show’s later stages.

They left Syco Music for the RCA label in November 2018.

Nelson had previously spoken openly about her battle with anxiety and previously revealed in a BBC documentary called Odd One Out that abuse on social media got so bad she attempted to take her own life.

The programme won her the award for best factual entertainment at the 2020 National Television Awards.

The band are scheduled to embark on a UK tour next year. – PA