Phil Lynott: ‘Being Irish meant everything to him’ 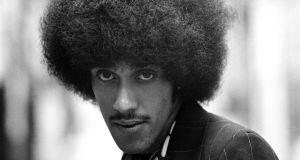 “I’ve never seen an Irish person that patriotic about his country,” Scott Gorham says about his late friend Phil Lynott. “Being Irish meant absolutely everything to him.”

The American guitarist, who joined Thin Lizzy in 1974, spent a decade on the road with Lynott and the rest of the band. “We would do these interviews in America, and if a journalist pronounced the name of an Irish city incorrectly, or misquoted a historical fact, I would just roll my eyes and say to myself, Here we go! It would turn into a full-blown Irish-history lesson,” Gorham says. “As far as Phil was concerned, if you didn’t know it, he was going to teach you – and you weren’t going to forget it.”

Gorham, who became one of Thin Lizzy’s twin lead guitarists, alongside Brian Robertson, is one of the few people to have known the real Lynott. They formed a friendship that lasted beyond the band’s break-up, in 1984, and continued right up to the singer’s death, at the age of 36, on January 4th, 1986.

Gorham visited Lynott at his London home less than a month before he collapsed, after a drug overdose, on Christmas Day 1985. “He was in terrible shape, there’s no doubt about it, and by stark contrast I had been off the drugs for a year,” Gorham says.

“I was glowing with health, and Phil noticed that straight off the bat – whilst realising just how poor he looked. He was still in his bathrobe to meet me at the door, but we hugged and started to laugh and chatted away like two long-lost brothers.

“At one point he whipped out an acoustic guitar and fumbled around with a few chords and said, ‘We really have to start writing songs again – we really need to get Thin Lizzy back together.’

“As I walked out the door I thought that he might just mean it, but of course he didn’t, and three weeks later he was dead. We never got the chance to see if we could get everything back together again, and that part of it is extremely sad, because Thin Lizzy meant everything to Phil, and to rekindle it with him would have been great.”

Gorham, who is now 69, and lives in London with his wife, adds, “Now that we’ve all got to the age we’re at, you realise just how young he was when he died. It’s startling, actually, and it brings into place what we could have done had he not died when he did.”

The guitarist also believes that Lynott, who grew up in Dublin, used his music as a way to cope with racism. “He never really dwelled or complained about it while he was in the band, but it came out in the songs,” he says. “As a conversation piece backstage, or on the plane, that just never came up. He almost tried to make it seem like it was not a big deal, yet if you said something to him which was racial in any way, you were going to be on your back.

He recalls the close shave one American had with Lynott. “‘On one occasion Phil and I met at a bar in Kansas, and there was a DJ in the corner playing songs. I remember him immediately clocking Phil as he walked in, and shortly afterwards he came rushing over and exclaimed, “Well hey, man, we don’t get many of your kind in here.” And I thought, Oh no, don’t go there.

“Phil looked at me, and I felt that this guy had just made a really big mistake, but then he continued, ‘We hardly ever get rock stars in this place.’ It turned out he was a huge Thin Lizzy fan, but prior to that you could have cut the tension with a knife… So he saved himself!”

Phil Lynott: Songs for While I’m Away is released on St Stephen’s Day