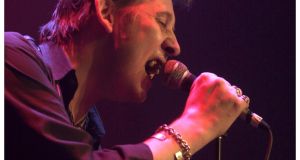 Musicians behind Ireland’s favourite Christmas hits are facing a steep plunge in their earnings this year because of the coronavirus pandemic.

Stars like Shane McGowan, Mariah Carey and Chris Rea, who ring in a windfall in royalties every year with around the clock airplay of their festive anthems, are being hit by a dip in commercial radio payouts.

The shuttering of countless pubs, clubs and retailers, which would normally be playing their tunes in the run-up to December 25th, as a result of Covid lockdowns is also eating into their copyright payments.

Other income to performers and songwriters from big food and drinks outlets like McDonald’s and Starbucks, which were forced into takeaway service only, is also set to nosedive, one of the world’s biggest organisations handling music royalties has said.

Tony Barton, head of writer support and relationships for the Performing Rights Society (PRS) – which collects royalties for more than 150,000 songwriters, publishers and composers – suggested household names can expect their yearly Christmas bonanza to be slashed by up to a quarter.

“[Losses] could be much more than 10 per cent,” he said. “It could be up to 25 per cent. We’ve been trying to be very honest with our members, we’ve been practical and realistic about this.”

PRS keeps secret how much top festive money spinners make to protect the privacy of its members. And many of the stars have repeatedly refused to disclose their Christmas pay cheque.

But widely quoted industry estimates suggest Slade gets a €1 million payout every year for its Merry Xmas Everybody, while The Pogues and Kirsty MacColl’s Fairytale of New York and Mariah Carey’s All I Want for Christmas is You each earn about €430,000.

The figures suggest losses running into hundreds of thousands of euro this year.

Songwriters and performers get paid for every time their song is played on radio stations, with a three-minute hit earning as much as €110 for each airing on the likes of BBC Radio 2, which has huge audiences.

Smaller stations will pay less under licence agreements with PRS, while commercial radio station payouts are linked to their advertising revenue which has been hard hit by the coronavirus crisis.

Another key income stream for artists is royalties collected from the likes of department stores, pubs, clubs and restaurants as well as hairdressers and shops. This will also be down.

PRS collected a record €885 million in royalties last year, out of which the not-for-profit organisation paid its members €750 million.

It expects that figure to be down 10 per cent this year and a further 10 per cent next year because of the pandemic.

“Over the whole industry, we’ve been hit pretty hard by the impact of Covid in quite a large number of areas that we license on behalf of our members,” said Mr Barton. “It’s really been turning into a tough period.”

Earlier this year PRS set up an emergency hardship fund for less well known musicians struggling to survive as gigs were cancelled. It has paid out €2.3 million to date to more than 4,500 songwriters and composers.

“A lot of musicians really don’t have a rainy day fund of money; they do live from gig to gig,” he said. “We’ve been very keen to help out there where we could.”